Today, the Bicentennial Half Dollar Coin remembers the centennial celebration in Philadelphia on July 4, 1876.

From the Washington, DC, Evening Star newspaper of July 5, 1876:

Philadelphia. July 5.—The celebration of the centennial anniversary here yesterday was of the most interesting character, both in its military and its literary natures, to say nothing of the spectacle of the legions of the lookers on and the holiday garniture of the streets and buildings.

The day opened with the ringing of bells and chimes throughout the city and the firing of the national salute in Fairmount Park.

At 8 a. m. the military parade and review took place, followed at 10 o’clock by ceremonies in Independence Square.

The troops were reviewed by Gen. Sherman. To the right of Gen. Sherman, upon the platform, was Prince Oscar, of Sweden, and on his left Secretary Cameron.

There were also upon the platform a number of foreign Centennial commissioners and military and naval officers.

Among the features of the parade was the centennial legion, which was organized expressly for the occasion, and is composed of a company from each of the thirteen original states.

The commemorative exercises of the day were held in Independence Square, and at 10 o’clock every available spot in the square and on the streets in the vicinity were crowded with people.

A stand with seats for four thousand invited guests had been erected, and at 10:15, when the ceremonies commenced, it was entirely filled.

The members of the Japanese centennial commission were among the first to take their places on the platform.

The arrival of Gov. Hayes and Gen. Sherman, and Lieut. Gen. Sheridan soon after, was the signal for great cheering.

Among the other distinguished persons on the platform were Gov. Carroll of Maryland, Gov. Begley of Michigan, ex-Gov. Noyes of Ohio. Rev. Dr. Sommerville of Scotland, Gov. Lippitt, of Rhode Island, Gov. Axtell of New Mexico, Bishops Howe and Simpson, together with the gentlemen who participated directly in the proceedings of the day.

At fifteen minutes past ten o’clock Gen. Hawley called the immense assemblage to order, and an orchestra of 250 musicians, under the leadership of Prof Gilmore, opened with the grand overture “The Great Republic,” arranged for the occasion by the composer, George F. Bristow, of New York.

While the music was in progress a shout of enthusiasm signalized the arrival of the Brazilian Emperor, Dom Pedro. He came directly to the front of the platform and acknowledged the cheers of the people by raising his hat, and then returned to his seat. At the conclusion of the music, Gen. Hawley advanced to the stand and delivered a short address of welcome.

He introduced as the presiding officer. Hon. T. W. Perry, President pro tempore of the Senate, who was greeted with applause. He spoke, commencing as follows:

“Citizens of our Centennial. The regretful absence of the President of the United States casts on me the honor of presiding on this eventful occasion. Much as I value the official distinction, I prize much more the fact that severally we hold and successfully we maintain the right to the prouder title of American citizen.

“It ranks all others; it makes office, unmakes officers, and creates states. One hundred years ago, In yonder historical structure, heroic statesmen sat and gravely chose between royal rule and popular sovereignty.

“Inspired with the spirit which animated the Roman sage who in the midst of Mars Hill declared that of one blood were made all nations of men, these continental sages reechoed in Independence Hall their immortal declaration that all men are created free and equal.”

He closed as follows: “Nations succeed each other in following the example of this republic, and the force of American institutions bids fair to bring about a great reversal of the source of political power. When that period shall come Great Britain, so magnanimous in her presence on this auspicious era. will then, if not before, praise the events when American Independence was won under Washington, and when freedom and equality of races were achieved under Lincoln and Grant.”

Prayer by Rev. Wm. Bacon Stevens, the singing of the hymn “Welcome to all Nations” followed, after which the Declaration of Independence was read by Richard Henri Lee, of Virginia.

The Bicentennial Half Dollar Coin shows with an artist’s depiction of Independence Hall on the fourth of July 1876. 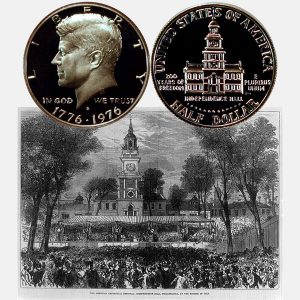