Today, the Half Cent Coin remembers 183 years ago when the Treasury Department burned; however much of their important papers were saved.

THE BURNING OF THE TREASURY.

Note of the president, directing an investigation in relation to the fire.

In consequence of the public loss sustained by the burning of the treasury building, and the destruction of some valuable papers, the president has deemed it proper, at the request of the secretary of the treasury, to direct an inquiry to be made into the cause of the disaster.

He therefore directs a thorough and careful investigation to be made on the following points.

1. In what manner was the fire occasioned?

3. Were proper exertions used to preserve the books, papers, and public property in the building, as well as to save the building itself?

The attorney general is directed to conduct the inquiry, and the other members of the cabinet to aid in it.

The witnesses to be examined on oath, and their depositions reduced to writing; and when the investigation is closed, the testimony to be reported to the president, together with the opinions of the members of the cabinet on the points above slated.

The president directs that the chief justice of the circuit court for the District of Columbia be requested to preside at the investigation, and to assist in it. ANDREW JACKSON. March 31, 1833.

Report of the investigators.

Sir: We have made the inquiries directed by your order of the 31st of March last, in relation to the fire at the treasury building, on the morning of that day, and proceed to state the manner in which the investigation was conducted, and the result of the inquiries.

We commenced the examination of witnesses at the room of the secretary of state, on the day of the fire at two o’clock in the evening, and continued to take testimony at the same place every day until the evening of Saturday, the 6th instant.

The proceedings were then unavoidably suspended until Wednesday the 10th instant, when some further testimony was taken, and the investigation closed.

We have examined altogether more than fifty witnesses, and have called before us every person from whom it was supposed that any information could be obtained on the subject.

Chief justice Cranch presided at the examinations, and gave to the inquiry his unremitting attention and valuable assistance.

You are aware the secretary of the navy left Washington, in order to execute some official duties, before the investigation was concluded.

It appears from the whole evidence, that the fire was first discovered about half post two o’clock in the morning.

The attention of two or three persons who reside in the neighborhood and in view of the building, was attracted by the light from the windows; and nearly at the same time the volume of smoke occasioned by the fire was observed by others who happened to be in the streets in different parts of the city.

Those who discovered the fire immediately gave the alarm, and hastened to the building; and when the first persons arrived on the ground, the guard within the house was still asleep, and unconscious of the fire, and was awakened by the noise made at one of the doors to rouse him.

There is some difference of opinion among the witnesses as to the precise state of the fire at that moment.

But taking the whole testimony together, we think it is fully proved, that when the first persons arrived on the ground, the room in the second story on the north side of the house, and immediately west of the projection in the centre of the building, appeared to be on fire in every part — that the flames and dense clouds of smoke were issuing from one or both of the windows of the room— and that there was then no appearance of fire in either of the adjoining rooms, nor in the garret, nor roof.

In a very few minutes, however, the fire was communicated to the adjoining rooms, and to the garret and the roof; and the garret being filled for the most part with old papers and paper cases, the flames spread through it with great rapidity.

The first engine arrived on the ground in twenty minutes after the fire was discovered, and the roof over the room in which it originated was then blazing, and very soon afterwards began to fall in.

Every exertion to check the flames was immediately made with this engine, and others which arrived shortly after it.

But it was soon evident that the want of a sufficient supply of water in the neighborhood of the building rendered it impossible to save it, and the fire continued to advance.

And in about one hour from the time it was first seen, the whole building, with the exception of the fire-proof portion of it, was either consumed or on fire.

We have endeavored in vain to trace the origin of the fire, and are unable to impute it to any particular cause.

Three of the witnesses who have been examined, passed near the building about half past one o’clock, or a little later, on the morning of the fire, and at that time there was no light from any of the windows, nor any thing in or about the house to attract attention or create alarm.

The remains of the building have been carefully examined by skilful workmen, and they can discover no defect in its construction which may be supposed to have occasioned the disaster.

On the night of the fire the usual precautions for security appear to have been taken.

The regular watchman being sick and unable to attend, his place was supplied, under the direction of the superintendent, by a young man between nineteen and twenty years of age, who has been employed constantly for about eighteen months past, as one of the laborers at the building.

And, according to the ordinary practice of the guard, he examined about ten o’clock at night all the rooms, except those in the fireproof part of the house, and found the fires in the grates to be, as he supposed, entirely safe.

The fuel used in the part of the building where the fire began, is anthracite coal; and in the room where it originated, the coal had sunk below the upper bar of the grate at the time of the examination by the guard: and the blower, resting on the ash pan, was placed as a fender before it, according to the usual practice.

No fresh coal had been put on the fire after twelve or one o’clock on that day.

The outer doors and the windows of the house were fastened in thc ordinary manner in the inside, with the exception of a window in the fire-proof, which seems to have been vегу negligently secured, if secured at all, on that night.

But there is no communication between that room and the part of the building where the fire commenced; and if an evil disposed person had entered at that window, he could not have made his way into any other room.

The regulations of the superintendent made it the duty of the night guard to make the examination of the rooms and fires above mentioned; but he was not required to keep awake all night; and, since the year 1826, it has been the practice for only one of the watchmen to remain during the night in the building, and he has been permitted to sleep after ten o’clock.

As soon as the fire was discovered, the proper exertions were immediately made by the officers of the government and the citizens who assembled, to save the books and papers.

And the most active and praiseworthy efforts were used for that purpose; and, in some instances, the zeal of those engaged exposed them to much hazard.

The secretary of the treasury was early on the ground, and by his direction the books and papers were placed, as they were brought out, under the care of proper guards — and on the same day, at an early hour in the evening, they were deposited in a house that was immediately engaged for the temporary occupation of the treasury department.

We cannot, at this time, undertake to state with precision, what papers and books have been destroyed; since those which were saved have not yet been perfectly arranged.

The secretary of the treasury has taken measures to obtain a prompt and accurate report from the heads of the bureaus on this subject.

But we believe that very few papers have been lost that are of much importance to the government or to individuals, and that the great mass of the most valuable books and papers have been saved.

The depositions we have taken accompany this report— and also drawings of the treasury building, which will enable you more readily to comprehend the testimony of the witnesses.

We have the honor to be, sir, very respectfully, your obedient servants,

LOUIS McLANE, secretary of the treasury.

The Half Cent Coin shows with a diagram of the proposed fire-proof room at the Treasury Department, circa 1805. 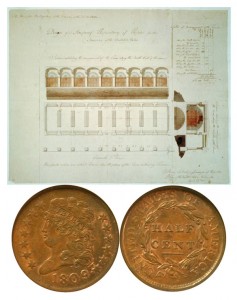