Today, the Alaska State Quarter Coin remembers the purchase from Russia 149 years ago along with some of the historical statistics.

From the Magazine of Western History, 1886:

The western boundary of Alaska is, therefore, just about as far west of San Francisco as Maine is east, or about the centre of the United States east and west.

Peter the Great sent out an exploring expedition under the command of Vitus Behring, a Danish captain, who began his overland journey in 1725, and not until 174 1 did he discover Alaska in latitude fifty-five degrees, twenty-one minutes. Peter the Great died before the discovery was made.

The great Russian Fur company was formed in 1783 by Siberian merchants, and held sway over the country for many years. Alexander Baranoff for many years ruled the country with an iron hand at the head of this great company.

His history and rough experiences in this vast solitude are full of romance and are extremely interesting. In 1799 he came to Sitka, and in 1802 the Indians massacred all the inhabitants. Baranoff was absent and escaped.

He remained thirty years in Alaska, and died on his way to Siberia in 1818, having been superseded by the company at the age of seventy-two. He seems to have been the great leader while Russia held Alaska.

After a good deal of negotiation and several offers by our government to Russia through Secretary Seward, Alaska was delivered to the United States by the payment of $7,200,000, or less than two cents an acre.

Secretary Seward, upon being asked once what he considered the greatest act of his life, replied: “The purchase of Alaska.”

He was derided and laughed at at the time, and the purchase was called “Seward’s folly,” and many considered that for the $7,200,000 we had got a vast country containing nothing but mountains and ice.

But the climate of Sitka in winter is milder than New England and in the summer delightfully cool and bracing.

The effect of the Japanese currents on the coast causes the mild temperature.

The Alaska Commercial company has paid nearly as much in royalty to the United States, and in rental of the islands of St. George and St. Paul, for the privilege of catching seals, as was paid for the whole of Alaska, and Secretary Seward is vindicated.

The Czar of all the Russias no doubt hoped the purchase would create a war between the United States and Great Britain, and he was glad of the opportunity to spite England, as he hated her with intense hatred.

Congress seems to have neglected this country, as not worthy of attention, for seventeen years.

Soon after the purchase, adventurers of all kinds poured into the country. Mr. Bancroft says:

Speculators, politicians, office-holders, tradesmen, gamblers and adventurous women flocked to Alaska. Stores, saloons and restaurants were speedily opened. Squatters claims were put on record. Vacant lots were staked out and frame shanties were erected. The prices charged for real estate promised very speedily to make a total, at Sitka alone, equal to the purchase price of the whole territory.

Someone relates that a log house, with the lot, was held at ten thousand dollars. At the first charter election there were as many candidates as voters.

The Russians were offered by the Hudson Fur company their passage paid to Russia, and all of the better class availed themselves of the offer, and five years later there was less population than when Russia had possession.

The neglect of congress to provide any form of civil government or protection for the inhabitants, checked all progress and enterprise and a great collapse came and the country was nearly deserted.

Since the Northern Pacific railroad has been built and the development of the Puget Sound country, fisheries have been growing and mining interests have received attention, and it seems as if a new era was about to dawn upon Alaska, and the steamers in the summer are crowded with tourists and prospectors — the former to see the grandest scenery in the world.

The Alaska State Quarter Coin shows with an artist’s image of fishing in the Sitka area, circa 1874. 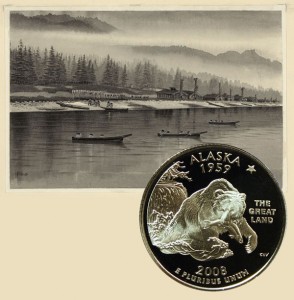