Today, the James Buchanan Presidential One Dollar Coin remembers the news of the first official telegraph message over the Atlantic submarine cable on August 16, 1858.

Oddly, though, a small article 50 years later suggest that first message was not successful.

This article in the American and Commercial Advertiser newspaper of August 1858 provided the exciting story of that first message:

Received by Telegraph at the American Office.

First Dispatch from Europe to America.

New York, August 16.—The following dispatch has just been received by the American Directors of the Atlantic Telegraph Company, from the English Directors at Valentia Bay:—

“To the Directors of the Atlantic Telegraph Company:

“Europe and America are united by Telegraph. ‘Glory to God in the highest, and on earth peace–good will towards men.'”

A dispatch from Trinity Bay says that the message from the Queen may be expected this evening.

Trinity Bay, August 16.—The Queen’s message is now coming over the cable.

MESSAGE OF CONGRATULATIONS FROM HER MAJESTY QUEEN VICTORIA, OF GREAT BRITAIN, TO THE PRESIDENT OF THE UNITED STATES!

To the Honorable the President of the United States:—

“Her Majesty desires to congratulate the President of the United States upon the successful completion of this great international work, in which the Queen has taken the deepest interest.”

THE PRESIDENT’S RESPONSE TO QUEEN VICTORIA.

The President cordially reciprocates the congratulations of Her Majesty, the Queen, on the success of the great international enterprise accomplished by the science, skill and indomitable energy of the two countries. It is a triumph more glorious, because far more useful to mankind, than was ever won by conqueror on the field of battle. May the Atlantic Telegraph, under the blessing of Heaven, prove to be a bond of perpetual peace and friendship between the kindred nations, and an instrument destined by Divine Providence to diffuse Religion, Civilization, Liberty and Law throughout the world.

In this view will not all the nations of Christendom spontaneously unite in the declaration that it shall be forever neutral, and that the communications shall be held sacred in passing to the places of their destination, even in the midst of hostilities.

New York, August 16, PM—The announcement of the reception of the Queen’s Message to the President of the United States caused an intense degree of enthusiasm in this city. The bells of Old Trinity are now ringing a merry peal—flags are flying, cannon firing, and the greatest satisfaction is everywhere expressed at the joyful intelligence of the union of Europe and American by telegraph.

Philadelphia, August 16.—A salute of 100 guns will be fired at 7 o’clock tomorrow morning, and all the bells in the city will be rung in honor of the completions o the Atlantic telegraph.

Washington, August 16.—The intelligence of the reception of the Queen’s message spread rapidly throughout the city, and this evidence of the successful working of the Atlantic Line occasioned much rejoicing. In some quarters, however, its authenticity was questioned, until a dispatch from the General Agent of the Associated Press removed all doubts. The first information on the subject was communicated to the President through Senator Bigler, from information obtained from the Washington Associated Press Agency, when the President returned at once to the city from the “Soldier’s Home,” and received at the White House the Message from Her Majesty, where the reply was prepared.

The Mayor of Washington this afternoon sent a message to the City Councils recommending that measures be taken to celebrate the success of the Atlantic Telegraph. Special committees were appointed to agree on a program.

Boston, August 16.—The successful working of the Atlantic telegraph will be celebrated in this city tomorrow, as follows: A salute of 100 guns will be fired from the Common at noon, and all the bells of the city will be rung. In the evening, the trees of the Common will be hung with French and Chinese lanterns. The city buildings will also be illuminated, and four bands of music will be stationed on the Common. The citizens generally will all illuminate their residences.

Lancaster, Pa., August 16.—The Queen’s message causes general rejoicing here. A national salute is being fired from Wheatland, and salutes for Morse and Field. The bells of the city were rung for one hour.

Louisville, Ky., August 16.—The reception of the Queen’s message caused a great sensation here. There was a grand display of fire-works by the Telegraph Company this evening, and the city authorities are preparing to celebrate the event.

Nashville, Tenn., Aug. 16.—There is a tremendous excitement here tonight incident upon the reception of the Queen’s Message. Large bodies, with music and flags, are parading the streets. Bonfires are blazing and the bells of the city have been ringing for half an hour.

New Orleans, August 16.—The Queen’s Message has been received here and causes much excitement and enthusiasm.

This next article, very short, in the Electrical Engineer magazine, published weekly in London, of April 1908 suggested the hoax:

August will be the fiftieth anniversary of sending the first cable message across the Atlantic Ocean.

In August of 1857 the first attempt to lay a cable was made, but about 300 miles from the Irish coast a strain caused by a sudden dipping of the sea bottom caused the cable to part, and the attempt was for the time abandoned.

A message of 90 words from Queen Victoria to President Buchanan, which took 67 minutes to transmit, was sent through the 1858 cable, but after a few following short messages it ceased to transmit signals.

One of the electricians on the U.S.S. “Niagara,” which, together with the British war vessel “Agamemnon,” laid this cable, always maintained that no message was ever sent, and that the message to Buchanan from Queen Victoria was “cooked up” for commercial purposes, his ground being that the cable had ceased to test out long before reaching the Newfoundland coast, and that on several occasions in paying it out accidents had occurred that had destroyed the insulation of the cable.

In 1865 another unsuccessful attempt was made to lay an Atlantic cable, and the first operative cable was not laid until 1866.

The James Buchanan Presidential One Dollar Coin shows with an artist’s image portraying the first undersea communication between America and Europe. 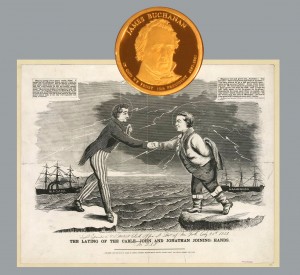