Today, the Silver Three-Cent (Trime) Coin remembers when the first dispatch of international news traveled over the Atlantic cable and was published in the New York Herald newspaper of August 27, 1858:

The first dispatch of general news passed over the Atlantic telegraph cable on Wednesday, and is published in today’s Herald. It is of a highly important character.

The war between the Allies and China is at an end. A treaty of peace has been concluded between the English and French plenipotentiaries and the Imperial Commissioner.

It concedes all the demands of the allies, including the establishment of embassies at the Court of Pekin, and indemnity for the expenses o the war.

Nothing is said of the movements of the Russian and American diplomats, but of course both Russia and the United States will participate in the advantages that will accrue to commerce from the re-establishment of peace and a more extended intercourse, politically and commercially, with the Celestial empire.

The First Flash from Europe — Inauguration of the Transition Period throughout the World.

It is a good omen that the first flash of news from Europe through the Atlantic cable brings tidings of peace.

A treaty has been concluded by the ambassadors of England and France with the Emperor of China, by which the doors of that populous region are opened still wider to commerce, and the diplomacy of civilization has secured its establishment at the Court of Pekin.

The mutiny in India, too, is being rapidly quelled, and peace — the great promoter of the arts, sciences, commerce and civilization — dawns in the East.

The cable has demonstrated its own success, and has today given us the first pulsation of a revolution in the material and intellectual world that has had no equal since the laying of the primary formation of geology.

Man has made for himself a new starting point in civilization, upon which a new order of things must grow up.

As the earth itself grew upon the primary formation, with its accretions and dissolutions of matter, and all its subsequent layers of different periods of time, so the moral world must now change its whole face, under the direction of the new master spirit of the age and of universal power.

The old relation of man to space has been annihilated. The span of human life hits been virtually extended; and in receiving a power to do what it could not do before, the duty and the relations of humanity to each other and to outward things have been elevated and ennobled.

The separate systems of civilization, thought and development, which have been hitherto revolving each in its separate and limited sphere, must now come together and form one great and harmonious whole.

The abysses of the ocean have been annihilated, and the antipodes have ceased to exist.

The thought of men has become ubiquitous; for, mounting upon the wings of the lightning, it can carry itself in a moment to the utmost confines of the earth.

The great divisions of the mighty army of human progress, which hitherto have been divided from each other by longer or shorter spaces of time, will soon be brought into instantaneous communication —quickened by the same thought, and guided by the same knowledge, at the same moment of time — and the future march of the world will be hastened to a speed of which we of today can form no conception.

This revolution will not be instantaneous, but it will be a silent and a rapid one.

The existing forms of intercourse, trade, and contact between men and nations, will crumble away, to be succeeded by others, as the primary, secondary, and tertiary formations of geology gave place to each other.

The moral world now enters upon its transition period. All this is In the essence of things to be.

Man will soon accustom himself to use the new power at his command, and to apply it to his benefit, and to increase his happiness.

Practice will beget confidence, and confidence will soon contrive a thousand uses for it of which we today have no conception.

Commerce will, no doubt, be the first to avail itself of its advantages, for it is quick to know the springs of profit.

See today the effect of the news from China!

Last night it was known from Moscow to New Orleans that peace had been made there!

Every merchant or trader interested in tea or silk, knows that the causes which interfered with his trade have been removed!

The Russian caravans across the steppes of Asia,. the English fleets from the British isles, and the swift messengers from the shores of America, all start this morning for the newly re-opened scene of their traffic, animated with the same idea, and impelled by the name knowledge!

Under the new era which has been inaugurated, nations lose their separate identity, and become, in fact, but simple members of the great human family.

Cabinets most change their policy, and diplomacy cease to be the art of hiding thought.

The statesmen of the world will find themselves impelled by the knowledge of events which the telegraph will spread everywhere, and forced to guide their acts by the impulses which affect the whole world, rather than by those confined to their own limited locality.

Great wars will cease; for the faculty of instantaneous intelligence brings men nearer together, makes them to know each other, and removes the possibility of those errors upon which war is founded.

Among men new habits will be acquired, new practices grow up, new usages supersede old ones, with the new era of instantaneous world-wide intelligence.

Every region of the earth must be bound in the folds of the telegraph. As soon as the Atlantic cable is thrown open to the public, and Europe and America come to be quickened by its current, those countries that are not yet Included in the electric system will seem to be out of the new and more advanced world that has been brought into existence.

Then every man will feel that we must have a cable to South America, to Australia, to China, and to hte farthest confines of the Pacific.

These will soon be laid. Movements are already on foot to bind India and Australia to Europe, through the Red Sea; and now that peace with China is made, and its court opened to foreign embassies, we must have a telegraph to Pekin.

The Silver Three-Cent Coin (Trime) shows with an image of Sandy Hook telegraph operations, circa 1857. 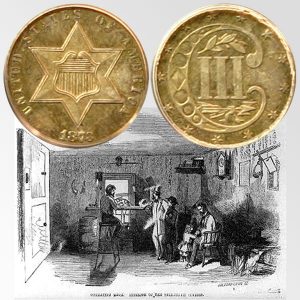