Today, the Rhode Island State Quarter Coin remembers when the governor removed 44 cannon from the British on December 6, 1774.

From the History of the United States of America, from the Discovery of the Continent to the Organization of Government under the Federal Constitution, 1497—1789, Volume III, published in 1874:

Measures meanwhile were everywhere on foot, by the appointment of committees of inspection, to enforce the American Association. Philadelphia set the example. New York followed by appointing a city committee of sixty, with full powers for that purpose.

At a third session of the Massachusetts Congress, held after a short adjournment, the delegates to the late Continental Congress made a report of the doings of that body, all  of which were fully approved.

It was voted to enroll twelve thousand “minute men” — volunteers, that is, from among the militia, pledged to be ready for service at a minute’s notice; and negotiations were ordered with the other New England colonies, to make up this force to twenty thousand.

John Thomas, of Plymouth county, who had led a regiment in the late war, and William Heath, a Roxbury farmer, were commissioned as generals.

Domestic manufactures were strongly urged upon the attention of the people. The same delegates as before were appointed to the Continental Congress to be held in the spring.

Directions were also issued for the election of a new Provincial Congress, to meet early in the year, at which time the members of the last elected council were requested to be present.

The Congress then adjourned to attend the annual thanksgiving, of which they had assumed the appointment.

Their authority was zealously seconded in every town by Committees of Safety, vested with general executive powers, Committees of Correspondence, and Committees of Inspection, appointed to look after the observance of the American Association.

In the absence of the ships of war usually stationed in Narragansett Bay, forty-four pieces of cannon were taken from the batteries at Newport [December 6, 1774] and conveyed to Providence.

When called upon by the British naval commander for an explanation, Governor Wanton bluntly avowed that these cannon had been taken away to prevent their falling into his hands, and were intended for use against any power that might offer to molest the colony.

This movement in Rhode Island was induced by a royal proclamation prohibiting the export of military stores to America. It was soon followed up in New Hampshire. Instigated by Paul Revere from Boston,  and led by John Sullivan, a leading lawyer, late a delegate to the Continental Congress, and by John Langdon, a principal merchant of Portsmouth, a large party entered the fort at that place, which was only guarded by four or five men, and carried off a hundred barrels of powder, some cannon and small arms.

The doings of the Continental Congress were approved by a convention in Maryland, and the several counties took measures for enforcing the Association. The Convention of Maryland assumed, in fact, the powers of government; they ordered the militia to be enrolled, and voted £10,000 to purchase arms.

The Assembly of Pennsylvania also approved the doings of Congress, and appointed delegates to the new one.

In South Carolina, delegates to the new Congress, and committees of inspection to enforce the Association, were appointed by a provincial convention, of which Charles Pinckney was president, called together by the committee of ninety-nine.

The Rhode Island State Quarter Coin shows with an image of the Cliff Walk at Newport, circa 1880. 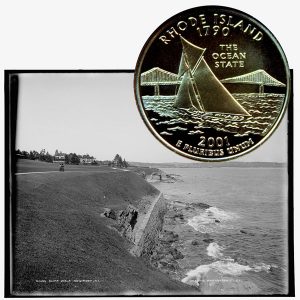