Today, the Woodrow Wilson Presidential One Dollar Coin remembers the news of the Germans torpedoing an American cargo ship, the Gulflight near the Scilly islands on her way to France.

Will Make No Comment on Torpedoing of Gulflight Until Fuller Details Are Received From American Representatives.

Captain and Two of Ship’s Crew Are Dead

By Associated Press Washington. May 3.—

The first official report of the torpedoing of the American tanker Gulflight reached the State department late this afternoon in an undated dispatch from Consul Stephens at Plymouth, England, says the attack was made Saturday, but the vessel was still afloat and that patrol boats were attempting to tow her to the Scilly islands.

Washington, D. C. May 3.—President Wilson will reserve judgment on the torpedoing of the American steamer Gulflight until fuller details are received. The President inquired about the incident when he arrived from Williamstown, Mass., today, but was told that so far as White House officials know no official word has come in.

In the face of news dispatches officials state that the attack on the ship is a serious matter, but they intend that a very thorough investigation has been made and that no hasty action should be taken.

Secretary Bryan said that a thorough inquiry would be made but that before official reports were received the Washington government would make no comment.

Should another day pass without information from American officials abroad they probably will be instructed to get in touch with the remote localities where the Gulflight and her crew were taken.

By Associated Press New York, May 3.—

The two Americans in addition to Captain Gunter, who lost their lives when the American steamer Gulflight was torpedoed off the Scilly Islands, were Charles C. Short, of Chicago, the wireless operator, and Eugene Chapaneta, of Port Arthur, Texas, a seaman, according to a cablegram received here to-day by the Gulf Refining Company, owners of the vessel.

The message, a brief one, was signed by First Officer Ralph Smith. It said that Captain Gunter, whose home  is in Bayonne, N. J., died of heart disease, and that Short and Chapaneta were lost. These were the two men, it is believed, reported yesterday to have jumped from the vessel after she was struck and who were lost because of the fog that prevailed.

The ship and cargo, according to James Kennedy, marine superintendent of the company, were valued at $1,000,000.

Mr. Kennedy said he was waiting further advices giving full particulars of the attack on the Gulflight before communicating with the State Department.

A claim for the loss sustained, including damages for the lives lost, undoubtedly will be filed with the State Department, he thought.

The Gulfllght’s cargo, Mr. Kennedy said, consisted of gasoline and oil in bulk and in cases. It was consigned to firms doing business in France and not to the French government, he asserted.

Captain Alfred Gunter, whose death from heart failure was reported, was 52 years old.

Early in the year he took a cargo of cotton into Bremen aboard the Gulflight.

In January of last year he was in command of the steamer Oklahoma, which broke in two in a gale off the New Jersey coast and was rescued with seven of his crew by the steamer Bavaria.

The Woodrow Wilson Presidential One Dollar Coin shows with an image of the Gulflight and her captain with his family. 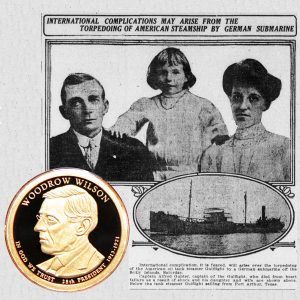