Today, the Woodrow Wilson Presidential One Dollar Coin remembers the news on May 10, 1915, about  the sinking of the Lusitania and the worry of war.

Queenstown, May 10. — The burial of the Lusitania victims is proceeding today. In a huge grave, 20 by 30 feet, and dug by British soldiers, one hundred and forty odd of the unidentified dead will be placed tomorrow.

Survivors today tell of having seen the submarine which sent the Lusitania to the bottom, shortly after the big ship listed. One said that it was within 300 yards, with the crew on deck viewing the handiwork. It remained on the water only a few moments.

How many torpedoes struck the steamer is still undecided. Different survivors are positive it was one, two and three.

The latest reports give the number of survivors at 764. There were 1,910 aboard, which would make the life lost 1,146. No more bodies were brought in today.

It is reported that the liner St. Paul sent a wireless message saying she had passed several bodies near the scene of the wreck yesterday.

Friends of Alfred Vanderbilt wanted to send a tug to seek his body, but officials advised against it. The tug didn’t go.

Kinsale, May 10 — A coroner’s jury today returned this verdict: “The jury finds that this appalling crime is contrary to international law and the conventions of all civilized nations, and we therefore charge the officers of the submarine and the German Emperor and the Government of Germany, under whose orders they acted, with the crime of willful and wholesale murder.”

Geneva, May 10 — A news dispatch says that a number of Americans, mostly businessmen, are arriving at Basel from Germany, to await developments in the relations between the United States and Germany.

London, May 10 — The First Lord of the Admiralty stated in the House of Commons this afternoon that Captain Turner, of the Lusitania had acknowledged receipt of wireless messages from the admiralty, giving warning and direction for the course he was to take.

Washington, May 10 — All eyes continued to be focused on the White House, where the final decision on the policy to be pursued by the United States is to be made. Only the President’s most intimate advisors know of the complexities of the problem raised by the sinking of the Lusitania. It not only concerns the attack on the Lusitania with nearly 200 Americans on board, but a series of incidents indicating a period of strained relations with Germany for many weeks.

The President has watched without open comment, but it is known with growing disapproval the complaints of the German officials with regard to questions of neutrality and the efforts to array German-American sentiment against the Washington administration as a means of urging and embargo on munitions of war against the Allies.

At first the German government admitted that there was no violation of international law in the sale by private individuals of munitions of war. When the German ambassador in a memorandum practically accused the United States government of not being neutral in the question of permitting shipments of munitions, the President was amazed.

He wants to be certain whether they range themselves in order toward a grave climax of a carefully planned policy of hostility to the United States, or whether the sequence is casual and the German government desires to continue friendly relations with the Washington government.

If the German government, as not a few diplomatists and officials fear, is anxious to draw the United States into the European conflict in the hope that defenses at home will reduce the supply of arms to the Allies, some officials believe the situation must be considered in the light of other possibilities and incidents in the future which might be calculated to aggravate public feeling in the United States.

In every quarter the opinion prevailed that the President was confronted with not only the most serious problem of his own career but one of the most trying and awkward situations in the history of the United States. In patient expectancy official Washington awaits the President’s decision.

Neutral governments are anxious to know what the course of the United States will be. They have frequently intimated to the American government their willingness to join in any movement which might effectively protect the rights of neutrals. They have promised their moral support and while the United States traditionally has been opposed to joint action of any kind, some observers think a contingency may arise as international situation develops which may make necessary conversations with the neutral countries on a common policy to safeguard the rights of neutrals.

“With joyful pride we contemplate this latest deed of our Navy. It will not be the last.

“The English wish to abandon the German people to death by starvation. We are more humane. We simply sank an English ship with passengers who at their own risk and responsibility entered the zone of operations.”

London, May 10 — The Central News has received a dispatch from its correspondent at Genoa, who says a telegram received there from Munich declares it was the German submarine U-39 which sank the Lusitania.

The Woodrow Wilson Presidential One Dollar Coin shows with an image of the Lusitania. 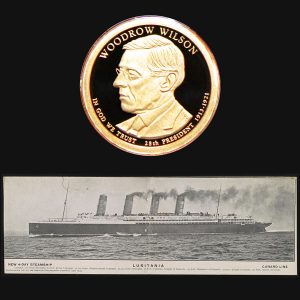