Today, the Guam US Territory Quarter remembers when the cruiser Yosemite was lost in a typhoon on November 13, 1900.

Admiral Sends a Message Explaining How Yosemite Was Lost in the Typhoon — Long Expresses Regrets.

The General Alava which is said to have passed into the track of storm thought to be safe.

Washington, Nov. 29.—The navy department today received the following cablegram from Admiral Remey confirming the report of the disaster to the auxiliary cruiser Yosemite at Guam:

Admiral Remey’s dispatch came at an early hour, and gave the first official data of the total loss of the Yosemite.

The dispatch was communicated to Secretary Long, who came to the department, and spent part of the morning there.

The secretary expressed profound regret at the loss of the ship and men, but there was some consolation in the fact that the loss of life was comparatively small, considering the large complement of officers and men carried by the Yosemite under ordinary circumstances.

A dispatch was sent to Remey asking for all further particulars which might be available, and for the names of the lost boat’s crew.

The fact that Admiral Kempff had left Cavite by this time for Guam gave assurance that everything possible would be done.

The secretary said the department would make every effort to ascertain the extent of the disaster and the names of those who were lost, and would keep the public informed.

Admiral Remey’s reference to the Justin, which went to the rescue of the Yosemite, applies to the collier Justin, which recently had arrived at Guam.

The plans concerning the Yosemite were in a transient state, and within a few days from the time of her loss she was expected to leave Guam for Cavite.

At the same time the collier Brutus had been ordered from the Philippines to Guam, where she was to take the place of the Yosemite as a station ship.

In the absence of all cable connection with Guam, it is impossible for the department to know whether the Brutus had reached there at the time of the disaster.

The Brutus took out a crew of marines, which will act as a garrison at Guam, replacing the forces which have been there for about a year.

The General Alava, which is reported from Manila to have passed into the track of the same typhoon which overwhelmed the Yosemite, is a little gunboat of 532 tons displacement.

Nevertheless she is said to have been perfectly staunch and seaworthy, and providing she met the storm in open sea she would in all probability come safely through.

The Guam US Territory Quarter shows with an image of the cruiser Yosemite, circa 1890s. 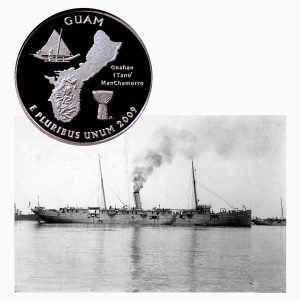