The investigation in response to public charges by Dr. Charles H. Parkhurst occurred from March 9 to December 29, 1894.

Dr. Parkhurt’s charged the police force with several crimes, but the chief accusations included bribery and complicity with criminals.

Interesting Testimony Before the Lexow Committee.

New York, October 9.—Before the Lexow committee today Policeman Degann testified. He was eleven years on duty at the French pier.

“The French steamship company.” said he “thought I was useful to them on the wharf.”

The witness said he got $5 weekly from Mr. West, sub-superintendent of the company, and afterwards got $10 weekly for going on the wharf Sunday when he was not on duty.

He was removed from the wharf January 8, 1891. Captain Schmittberger, taking charge of the steamboat squad in December 1891.

“Why were you removed?” asked Mr. Goff.

“A short time after Captain Schmittberger took charge, Wardman Vail came to me and said the captain wanted another $5 a week. I previously was giving up $5. I told the wardman I would not give up the other $5 and said I wouldn’t be any man’s slave.”

The witness said he was removed to the canal boat pier by Captain Schmittberger. The captain said that was the proper place for me, said the witness.

“To whom did the money go?”

“I don’t know: the men on the force thought it went to the captain. Captain Schmittberger was the first captain who wanted all the money.”

At the conclusion of this witness’ testimony, Mr. Goff said “it is a refreshing thing to see a policeman not afraid to tell the truth, and I think the attention of the committee should be called to his testimony.”

Senator Pound complimented Policeman DeGann and when the latter left the witness stand there was a great outburst of cheers.

Charles G. West, wharf superintendent of the French Steamship company corroborated Policeman Degann’s story in every particular. He objected to Degann’s removal, but it did no good.

“Do you know whether the company paid any money after Degann left.”

“Oh, I heard rumors about all the steamship companies.”

The witness said he knew nothing of the $500 payment which appeared in the books, and that he paid no officer after Degann left.

The witness told how Wardman Gannon came around after DeGann left and asked for money.

“I told him I would give money if he signed a receipt.”

“Did Gannon say to whom the money was to go?”

“He said the captain was to get it.”

“Who was the captain,” asked Chairman Lexow.

“No sir, it did not pass through my hands.”

The witness said it was the common rumor that all the steamship companies made a big purse for Captain Schmittberger.

Policeman John Corcoran took the stand. He is six feet one inch in height.

“Where is the rest of that club?” asked Mr. Golf, exhibiting about three inches of a policeman’s broken club.

The officer explained he was bringing a drunken prisoner to the station house and struck the railings with his club and broke it.

Mr. Goff produced a prisoner, who was cut and bruised. He was a little man about five feet in height. He presented a ludicrous picture as he stood by the side of the big policeman.

“Did not yon break that club on his head?”

“On my solemn oath I did not strike him.”

Peter Edward Quinn, the prisoner, testified he was arrested by Policeman Corcoran, but was not sure about being hit by the club on the head.

“How did you get the wounds on your face?”

“I was punched by Officer Corcoran in the station house.”

“Why did he punch you”

“I was saying something when he told me to shut up, and punched me.”

“I heard people hollering,” said he, “in the street and went to the place where the sound came from. I saw four policemen dragging Quinn along the street and beating him. I said it was a shame and a policeman struck me in the face. I was afterwards arrested charged with attempting to rescue a prisoner. I was on the way to the station house to see why Quinn was arrested and to get bail for him.”

“Did you ever hear Corcoran called by any name?”

“Corcoran is a specimen of a lily,” said Mr. Goff, “that tax payers of New York are nurturing in their midst. If the horticulture is not changed it will turn into a dragon lily. I should say tiger lily,” said the chairman.

Several other witnesses were examined and the committee adjourned till tomorrow.

Many of the policemen investigated by the Lexow committee were either fired or allowed to retire.

However, Captain Schmittberger was the only police officer investigated who was exonerated and allowed to continue his service. 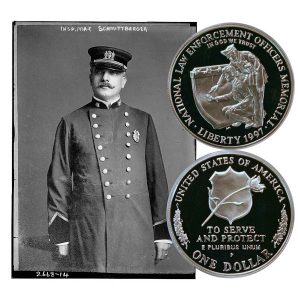