Today, the Franklin Founding Father Commemorative Silver Dollar Coin remembers when the Continental Congress chose the five men on June 11, 1776 to write the Declaration of Independence.

Franklin was the most senior member and the most accomplished writer, yet it was Thomas Jefferson who did the most work.

Was it because Jefferson had already spent time composing elements of a declaration?

Or, was it because, as this gentlemen speculated, the men were afraid of Franklin’s humor?

Franklin and the Declaration of Independence.

When the Declaration of Independence was prepared in 1776, Benjamin Franklin was seventy years old. He was one of the most talked-about personages in the world and by long odds the most learned and the most popular man in America.

Moreover, he had already acquired and won general recognition for marvelous skill in writing, a skill so great that after more than a century he is still regarded by critics as “the most uniformly readable writer of English who has yet appeared on this side of the Atlantic.”

Indeed, he was the only man in America who then had a European reputation, the only man who had intimate personal knowledge of the men and the forces in England with which the Colonists were then at war.

He was truly a distinguished man with tested abilities that justified his great distinction.

On June 11, 1776, the Continental Congress appointed Jefferson, Adams, Franklin, Sherman and Livingston to draw up the Declaration of Independence, which was moved by Richard Henry Lee, of Virginia, and seconded by John Adams, of Massachusetts, on July 2, and adopted on July 4 — the Declaration which said that “These United Colonies are, and of right ought to be, free and independent States, that they are absolved from all allegiance to the British Crown, and that all political connection between them and the State of Great Britain is, and ought to be, totally dissolved.”

It has always been a curious puzzle why Franklin, the man of ripe age, of commanding distinction and of approved literary skill, was not selected to write this Declaration instead of Thomas Jefferson, then only thirty- three years old and comparatively unknown.

It could not be that Franklin was passed by because he had done everything within his power to avert the war and reconcile the differences between the Colonies and the Mother Country, for all wise men in the Colonies did all that honor permitted in that direction until the die was cast.

And so his associates were possibly afraid that he would put a joke in the Declaration, and passed him by and selected the lank young Virginian with the freckled face.

As it was, Franklin did have his joke, for when the members of Congress were about to sign the Declaration, Hancock, whose earnestness is expressed in the bold signature which comes first, said in his own earnest way:

“We must be unanimous; there must be no pulling different ways; we must all hang together.”

“Yes.” replied Franklin.” we must hang together or we shall be pretty sure to hang separately.”

The Franklin Founding Father Commemorative Silver Dollar Coin shows with an artist’s image of the five members working on the Declaration. 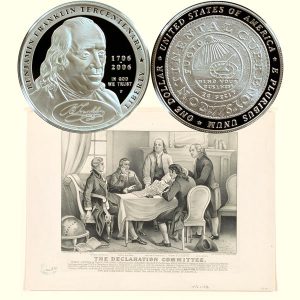