Today, the Roosevelt Dime Coin remembers when President Roosevelt helped with the corner stone of the Jefferson Memorial on November 15, 1939.

From the Washington, DC, Evening Star newspaper of November 15, 1939:

Corner Stone Is Laid For Memorial At Tidal Basin

Laying the cornerstone of the new Jefferson Memorial on the banks of the Tidal Basin, President Roosevelt this afternoon declared that Americans today believed with Jefferson that “the average opinion of mankind is in the long run superior to the dictates of the self-chosen.”

Jefferson lived, said the President, “as we live in the midst of a struggle between rule of the self-chosen individual or the self-appointed few, and rule by the franchise and approval of the many.”

The United States, during all the years after Jefferson, has expanded his philosophy, said the President, “into a greater achievement of security of the Nation, security of the individual unit, than in any other part of the world.”

“It may be,” he conjectured, “that the conflict between the two forms of philosophy will continue for centuries to come, but we in the United States are more than ever satisfied with the republican form of government based on regularly recurring opportunities to our citizens to choose their leaders for themselves.”

In his brief remarks prior to presenting the chief executive, Mr. Gibboney referred to the “most substantial progress” made on the building since ground-breaking ceremonies last December.

“The foundations have been completed and the superstructure is now well under way,” he said. “The Imperial Danby Vermont marble of the exterior and the Georgia white marble used in the interior of the memorial are now being set.

“We believe that the memorial when completed will be admired and acclaimed by the American people as a beautiful shrine dedicated to that far-seeing, progressive statesman—Thomas Jefferson —and to the great liberal principle for which he so valiantly contended.”

Mr. Gibboney. referring to frequent conferences with President Roosevelt, declared the commission was “extremely grateful for the valuable support, advice and assistance you have always so cheerfully given us, and we are proud today to welcome you here at this ceremony.”

Into the cornerstone of the memorial has been put one of the private documents of the third President, known as “Jefferson’s Bible,” which consists of nothing but the quoted sayings of Christ.

In the introduction to the book which is a copy of the original, now in the National Museum here, Jefferson explains: “I have performed this operation for my own use by cutting verse by verse out of the printed book and arranging the matter which is evidently His, and which is as easily distinguished as diamonds in a dunghill.”

The book, whose full title is “The Life and Morals of Jesus of Nazareth,” is characterized by Jefferson as “the most sublime and benevolent code of morals which has ever been offered to man.”

Indicating the private nature of the compilation which he made from the Greek, Latin and French and translated himself into English, Jefferson said he disclaimed any intention of ever publishing the book. ”I not only write nothing on religion,” he said, “but rarely permit myself to speak on it.”

Other documents which went into the large corner stone box were copies of the Declaration of Independence, the Constitution of the United States, and a 10-volume set of Jefferson’s writings, compiled and edited by Paul Leicester Ford.

Of modern interest, relating to the memorial itself, was a copy of the 1939 report of the Thomas Jefferson Memorial Commission, signed by President Roosevelt and all members of the commission.

The brief ceremony was broadcast by all radio chains, and amplified for the benefit of the assembled public.

President Roosevelt wielded the famous trowel used by George Washington in laying the cornerstone of the Capitol and a gavel made from a tree planted by Jefferson.

The National Park Service, which is executive agent for the Thomas Jefferson Memorial Commission in erection of the structure, was represented by several persons, including Francis F. Gillen, who personally supervises the work.

The cornerstone laying today is the denouement of a long controversy, which involved not only the kind of a memorial to Jefferson, but the design and the site.

The Roosevelt Dime Coin shows with an image of the laying of the Jefferson Memorial Corner Stone on November 15, 1939. 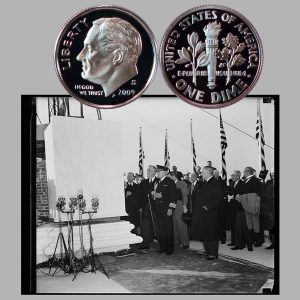