Today, the Alabama State Quarter Coin remembers the lessons of Anne Sullivan to Helen Keller and the success of teaching w-a-t-e-r on April 5, 1887.

The Story of My Life by Helen Keller and Annie Sullivan, published in 1905, included the tale of learning w-a-t-e-r from both the student and the teacher’s perspective.

One day, while I was playing with my new doll, Miss Sullivan put my big rag doll into my lap also, spelled “d-o-l-l” and tried to make me understand that “d-o-l-l” applied to both.

Earlier in the day we had had a tussle over the words “m-u-g” and “w-a-t-e-r.” Miss Sullivan had tried to impress it upon me that “m-u-g” is mug and that “w-a-t-e-r” is water, but I persisted in confounding the two.

In despair she had dropped the subject for the time, only to renew it at the first opportunity.

I became impatient at her repeated attempts and, seizing the new doll, I dashed it upon the floor. I was keenly delighted when I felt the fragments of the broken doll at my feet. Neither sorrow nor regret followed my passionate outburst. I had not loved the doll.

In the still, dark world in which I lived there was no strong sentiment or tenderness. I felt my teacher sweep the fragments to one side of the hearth, and I had a sense of satisfaction that the cause of my discomfort was removed.

She brought me my hat, and I knew I was going out into the warm sunshine. This thought, if a wordless sensation may be called a thought, made me hop and skip with pleasure.

We walked down the path to the well-house, attracted by the fragrance of the honeysuckle with which it was covered. Someone was drawing water and my teacher placed my hand under the spout.

As the cool stream gushed over one hand she spelled into the other the word water, first slowly, then rapidly. I stood still, my whole attention fixed upon the motions of her fingers.

Suddenly I felt a misty consciousness as of something forgotten — a thrill of returning thought; and somehow the mystery of language was revealed to me. I knew then that “w-a-t-e-r” meant the wonderful cool something that was flowing over my hand.

There were barriers still, it is true, but barriers that could in time be swept away. I left the well-house eager to learn.

Everything had a name, and each name gave birth to a new thought. As we returned to the house every object which I touched seemed to quiver with life. That was because I saw everything with the strange, new sight that had come to me.

On entering the door I remembered the doll I had broken. I felt my way to the hearth and picked up the pieces. I tried vainly to put them together. Then my eyes filled with tears; for I realized what I had done, and for the first time I felt repentance and sorrow.

I learned a great many new words that day. I do not remember what they all were; but I do know that mother, father, sister, teacher were among them — words that were to make the world blossom for me, “like Aaron’s rod, with flowers.”

It would have been difficult to find a happier child than I was as I lay in my crib at the close of that eventful day and lived over the joys it had brought me, and for the first time longed for a new day to come.

From the teacher’s reports:

I must write you a line this morning because something very important has happened. Helen has taken the second great step in her education. She has learned that everything has a name, and that the manual alphabet is the key to everything she wants to know.

In a previous letter I think I wrote you that “mug” and “milk” had given Helen more trouble than all the rest.

She confused the nouns with the verb “drink.” She didn’t know the word for “drink,” but went through the pantomime of drinking whenever she spelled “mug” or “milk.”

This morning, while she was washing, she wanted to know the name for “water.”

When she wants to know the name of anything, she points to it and pats my hand. I spelled “w-a-t-e-r” and thought no more about it until after breakfast.

Then it occurred to me that with the help of this new word I might succeed in straightening out the “mug- milk” difficulty. We went out to the pump-house, and I made Helen hold her mug under the spout while I pumped.

As the cold water gushed forth, filling the mug, I spelled “w-a-t-e-r” in Helen’s free hand. The word coming so close upon the sensation of cold water rushing over her hand seemed to startle her. She dropped the mug and stood as one transfixed.

A new light came into her face. She spelled “water” several times. Then she dropped on the ground and asked for its name and pointed to the pump and the trellis, and suddenly turning round she asked for my name.

I spelled “Teacher.” Just then the nurse brought Helen’s little sister into the pump-house, and Helen spelled “baby” and pointed to the nurse.

All the way back to the house she was highly excited, and learned the name of every object she touched, so that in a few hours she had added thirty new words to her vocabulary.

Here are some of them: Door, open, shut, give, go, come, and a great many more.

P. S. — I didn’t finish my letter in time to get it posted last night; so I shall add a line.

Helen got up this morning like a radiant fairy. She has flitted from object to object, asking the name of everything and kissing me for very gladness.

Last night when I got in bed, she stole into my arms of her own accord and kissed me for the first time, and I thought my heart would burst, so full was it of joy.

The Alabama State Quarter Coin shows with an image of an excerpt of Helen Keller’s Braille version of the w-a-t-e-r lesson. 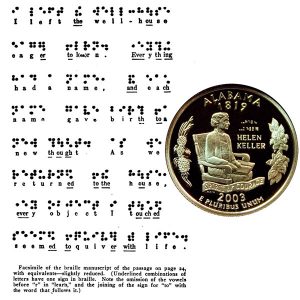