Today, the American Eagle Platinum Coin remembers the first trial of the new triple-screw war ship, the Columbia, on November 16, 1893.

From the Scientific American of November 25, 1893:

The official speed trial of this our most recently built war vessel took place November 18, a previously at tempted trial on November 16 having been given up on account of bad weather, although the engines were said to have worked smoothly, developing more than the power called for by the contract.

The course was almost directly north from a point off Cape Ann, Mass., a distance of 43.96 nautical miles, the vessel crossing the line at full speed, making a long turn, and taking another run over the course in the opposite direction.

According to the arrangements made, the times of passage over the course alone were to be taken, the time of turning being eliminated, but during the turn no change in engines or boilers was to be permitted, and not a valve or link was to be touched.

The starting line was crossed at 9:54:40, and at 11:49:48 the ship dashed across the finish line, completing the first half of the trial, the average speed having been 22.92 knots.

During this run the steam pressure had risen to 158 pounds, and revolutions 136 each on the twin screws and 131 on the mid-ship screw, and the last seven miles were said to have been made at the rate of 25.3 knots an hour.

After turning in a circle of about four miles diameter, the run back was commenced, the line being crossed at 12:14:58, with a steam pressure of 160 pounds, the twin screws making 136 revolutions each, and the mid-ship screw 130.

During the backward run there was some priming of the boilers at one time, and the speed between two of the stations on the course dropped to the rate of 21:11 knots, but the total backward run was made at the average rate of 22.71 knots.

The mean of the two runs was therefore figured as 22.81, and the builders have earned a premium of $350,000 for attaining a speed of seven quarter knots over that called for by their contract.

The naval officers aboard are said to have expressed the highest satisfaction with the performance of the vessel throughout.

These officers had also numerous assistants, the total government inspection force numbering no less than 36 officers—13 of the line, 20 of the engineer corps, and 3 of the construction corps of the navy.

While the determination of the speed alone required nothing save the accurate marking of time at the passage of certain ranges, and the careful computation and correction of the resulting speed, there were yet a host of subjects concerning which the government officers were deputed to gather numerous and thorough data.

Indicator diagrams were taken at close intervals from every engine on board, and from these will be determined pressures, horse power, and other information of great value to the navy department, not only for use in relation to the Columbia herself, but as a guide and assistance in future engine designing.

Her power consists of three three-cylinder vertical inverted triple expansion engines, having about 22,000 collective indicated horse power and driving three screws, one on the middle line, as in single screw ships, and the other two under the counters, as in twin screw vessels.

This power is calculated to produce a speed of 21 knots an hour, which the contract for the vessel calls for, but the builders will receive a bonus of $50,000 for every quarter knot the vessel makes over the required twenty one knots.

Our engraving is from Once a Week.

The engines are in three separate water-tight compartments, the two driving the counter screws being placed abreast the same as in twin screw ships, and the one driving the center shaft just abaft them and lapping each for one-half its width.

The weight of all propelling machinery, including water in the boilers, is 1,950 tons.

The coal supply on her normal displacement is 1,200 tons, but her maximum bunker capacity is 2,200 tons, which will give her at the most economical cruising speed a radius of action of about 16,000 knots.

The application of power through triple screws in large ships is an innovation, and its results in the Columbia are watched with intense interest by the entire civilized world.

Essentially and avowedly a commerce destroyer, and not a fighting ship, the armament of the Columbia will be comparatively light.

The Columbia has been in a special degree the work of Engineer-in-Chief G. W. Melville, U. S. N., of the Bureau of Steam Engineering, under whose direction the designing of her machinery was done.

When the estimates were made for this ship, the speed fixed was twenty knots, but after the naval appropriation bill was passed, it was found that in conference the speed had been raised to twenty-one knots, and Mr. Melville decided that the ship should have from 20,000 to 21,000 horse power, and at once began to lay out the engines and boilers.

It soon became apparent that twin screw engines would not do, because of their size and the fact that they would be very extravagant in the use of steam at the ordinary cruising speed.

Besides this the space that could be given up to machinery was restricted, and would not be satisfactory for twin screw engines.

Mr. Melville then decided that triple screw engines were the only ones that would do, and at once set about the preliminary design.

Through the course of her construction he has watched the machinery carefully, and the success which she has achieved marks a new era in marine propulsion.

The American Eagle Platinum Coin shows with an artist’s image of the new cruiser, Columbia, circa 1893. 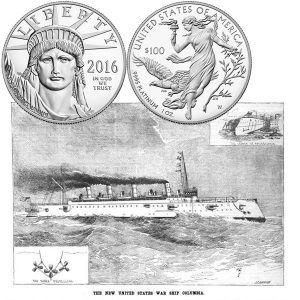