Today, the Silver American Eagle Coin remembers the Congressional Act of 97 years ago.

Be it enacted by the Senate and House of Representatives of the United States of America in Congress assembled, That the Secretary of the Treasury is hereby authorized from time to time to melt or break up and to sell as bullion not in excess of three hundred and fifty million standard silver dollars now or hereafter held in the Treasury of the United States . Any silver certificates which may be outstanding against such standard silver dollars so melted or broken up shall be retired at the rate of $1 face amount of such certificates for each standard silver dollar so melted or broken up. Sales of such bullion shall be made at such prices not less than $1 per ounce of silver one thousand fine and upon such terms as shall be established from time to time by the Secretary of the Treasury.

Measure Providing for Melting of Millions now Goes to the President.

The administration bill authorizing the melting into bullion of 350,000,000 silver dollars to pay trade balances was passed by the House late Monday without amendment. It had been passed by the Senate and now goes to the President.

The bill provides for the retirement of silver certificates concurrent with the melting of silver dollars and for the purchase of silver at not more than $1 an ounce to replace that melted. The section of the measure virtually fixes the price of silver. Settlement of trade balances with silver was determined upon in order to conserve the gold supply.

The government’s plan to melt several hundred millions of silver dollars now in the Treasury vaults, fixing an arbitrary price of $1 an ounce, has again stimulated demand for that metal in the local market.

Two weeks ago, bar silver was quoted at 91 3/8 cents. By steady degrees it has climbed to within a fraction of the price fixed by the Treasury Department, selling today at 99 1/4 cents. Dealers in silver say that the extraordinary demand for that metal from India and China is chiefly responsible for its recurrent strength.

The Silver American Eagle Coin shows against a view of silver bullion, circa 1897. 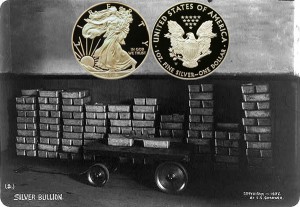