Today, the Maryland State Quarter tells the tale of how the US Naval Academy got its start first in 1842 then officially with its first class on October 10, 1845.

Back in 1842, the Secretary of the Navy reported on the lack of education of the naval officers.

He noted that the young midshipmen had to educate themselves and each other while working on their many tasks aboard ship.

He summarized that the lack of systematic training was a failure in the naval resources.

On September 13, 1842, a ship called the Somers set sail from the Brooklyn Navy Yard as a school ship for young naval apprentice volunteers.

Discipline on the ship became a problem. Less than three months after she set sail, a Court of Inquiry aboard the ship determined that Midshipman Philip Spencer and his cohorts, Boatswains Mate Samuel Cromwell and Seaman Elisha Small, were guilty of attempting a mutiny.

On December 1, the three men were hanged from the yardarm for their crime.

In addition to shocking the country, the mutiny suggested to the Navy that another method of education was needed rather than strictly by doing.

Interestingly, President John Quincy Adams in 1825 asked Congress to establish a Naval Academy “for the formation of scientific and accomplished officers.”

Twenty years after that request, the Secretary of the Navy established the Naval School without funding from Congress at a 10-acre Army fort in Annapolis, Maryland.

On October 10, 1845 at 11:00 a.m., the newly appointed superintendent, Commander Franklin Buchanan, declared the school officially open to the seven professors and 50 midshipmen.

The original school included five years of study with years one and five spent at the school and the years in between spent on a ship at sea.

Five years later, the school’s name changed to the United States Naval Academy with a change in the curriculum.

The new curriculum, which remains the basis for the current Academy, included four years of study at the school with the summers spent aboard ships.

Down through the years, the Academy grew in size – land, buildings, students, faculty and fields of study beyond that of the early years.

And, all because three young men highlighted the need for a formal naval education system after being hanged for foolishly attempting a mutiny back in 1842.

The Maryland State Quarter against a background of a ship’s rigging reminds us of the start of the Naval Academy in Annapolis, Maryland. 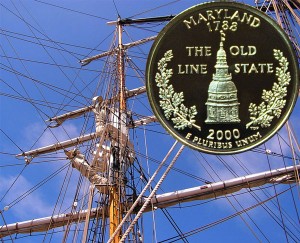