The Vermont Historical Gazetteer magazine, published in 1867, gave details of the man:

From the time of the capture of the garrison at Ticonderoga, Ethan Allen considered himself enlisted in the cause of American freedom.

And, although he held no commission from congress, he lent his willing services to Generals Schuyler and Montgomery, who were ordered to advance into Canada in the fall of 1775, and by whom he was entrusted with the command of certain detachments of the army, and sent forward for the purpose of ascertaining the feelings of the French settlers, and of engaging them, if possible, in the American cause.

In one of these excursions between Longeueil and La Prairie, he met Major Brown, with about 200 men, and it was agreed between them, that they would attempt the capture of Montreal.

Brown was to cross the river during the night, a little above the city, with his 200 men, and Allen, with 110 men, was to land a little below the city, and in the morning at a concerted signal, to assure each other that both parties were in readiness, they were to rush in on opposite sides, and take possession of the city.

With a few canoes and much labor, Allen succeeded in getting his men over in the course of the night, and in choosing his position.

Here he waited, with much impatience, for a signal from Brown, that he had passed over and was ready for an advance upon the city, but he waited in vain.

Brown, actuated either by cowardice or jealousy, did not pass over.

Allen’s position and numbers soon became known in the city, and all the forces that could be mustered, were sent out to assault them, and an obstinate battle ensued.

Allen, deserted by most of his Canadians, overwhelmed by numbers, and unable to retreat, was at length obliged to surrender at discretion.

This event took place on the 25th of September, 1775, and for the space of 2 years and 8 months, Allen was a prisoner in the hands of the British.

He was loaded with irons and sent to England, and was treated with the greatest cruelty and indignity, but in all situations, whether chained down in the hold of the vessel, or walking upon the deck, whether confined in the filthy and gloomy prison on shore, or abroad on his parole, he was, in all places, Ethan Allen, and no one else.

A full account of his doings and sayings and sufferings, during his captivity, was published by him soon after his return.

His narrative has since been reprinted several times, and is probably familiar to you all.

Ethan Allen was exchanged for Lieutenant John Campbell, on the 6th of May, 1778.

After waiting upon General Washington at Valley Forge, he returned to Vermont, where he, unexpectedly, but to the great joy of his friends, arrived on the 31st of May.

The news of his arrival was spread through the country.

The Green Mountain boys flocked around him, and gave him a hearty welcome, cannons were fired in tokens of gladness, and there was a general scene of rejoicing and hilarity.

In reward for Allen’s services and sufferings in the cause of his country, congress conferred upon him the rank and emoluments of lieutenant colonel in the service of the United States; but he never after his captivity joined the continental army.

But he engaged warmly in support of the government of Vermont which had been organized during his absence, against the machinations of New York.

And also in carrying on the negotiations with the British in Canada by which the operations of a powerful British army were three years paralyzed and rendered innoxious.

He was made brigadier general of the state militia, and in 1783, at the requisition of the civil authority led over 100 Green Mountain boys for the purpose of subjecting the disorganizing Yorkers in Guilford in the south eastern part of Windham county to the authority of Vermont.

It was on that occasion that he put forth the following characteristic proclamation: “I, Ethan Allen, declare that unless the people of Guilford peaceably submit to the authority of Vermont the town shall be made as desolate as Sodom and Gomorrah…”

His family remained at Sheffield till 1777.

They removed into the state the latter year while Ethan was in captivity and took up their residence in Sunderland, which was the home of the family till it removed to Burlington in 1787.

Ethan Allen came to Burlington in the spring of that year, with the view of devoting himself to farming, having selected for his residence the beautiful tract of intervale north of our village, now generally known as the Wan Ness farm.

He removed his family there in the course of the summer, and that was their home till the time of his death, which took place in less than 2 years from the time he came to Burlington.

The Vermont Commemorative Silver Half Dollar Coin shows with an artist’s image, circa 1902, of Allen being captured at Montreal. 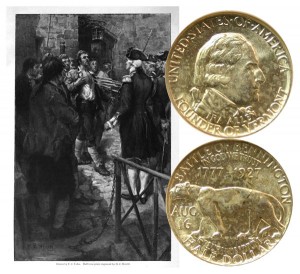