Today, the Lexington-Concord Sesquicentennial Silver Half Dollar coin tells the story of the first flag raised in revolt against the British rule.

The colonists and the British soldiers fought the first battles in Lexington and Concord, Massachusetts.

But, a few months earlier, another Massachusetts town roughly 50 miles south of Lexington showed their willingness to defy the British.

On October 21, 1774, the men of Taunton erected a Liberty pole upon the Green. On this pole, they raised their “Liberty and Union” flag.

They kept the crosses from the British flag in the upper left corner of a red background. Across the flag, the words “Liberty and Union” signified they were not considering severance from the mother country, but at the same time, they wanted Liberty.

On Monday, October 24, 1774, the Boston Evening Post wrote of the flag raising:

“We have just received the following intelligence from Taunton — that on Friday last a liberty pole 112 feet long was raised there on which is a vane, and a Union flag flying, with the words Liberty and Union thereon. To the pole is fixed the following lines:

‘Be it known to the present,
And to all future generations,
That the Sons of Liberty in Taunton
Fired with a zeal for the preservation of
Their rights as men, and as
American Englishmen,
And prompted by a just resentment of
The wrongs and injuries offered to the
English colonies in general, and to
This Province in particular,
Through the unjust claims of
A British Parliament and the
Machiavelian policy of a British ministry,
Have erected this monument or Liberty standard,
As a testimony of their fixed resolution
To preserve sacred and inviolate
Their birthrights and charter rights,
And to resist even unto blood
All attempts for their subversion or abridgement.
Born to be free, we spurn the knaves who dare
For us the chains of slavery to prepare;
Steadfast in freedom’s cause, we’ll live and die,
Unawed by statesmen ; foes to tyranny,
But if oppression brings us to our graves,
And marks us dead, she ne’er shall mark us slaves.’ ”

Years later for a Taunton celebration in 1888, one gentleman, Judge Bennett, wrote:

“Long before the Declaration of Independence, long before the burning words of Patrick Henry; before Putnam had left his plow in the Connecticut furrow, or Washington takes command of the American army; before the march to Lexington, or the fall of Ticonderoga, the citizens of Taunton with prophetic eye, foresaw the real issues involved in the coming conflict, and as early as October 1774, unfurled their banner to the breeze on Taunton Green, bearing those inspiring words, ‘Liberty and Union : Union and Liberty.”

The Lexington-Concord Sesquicentennial Silver Half Dollar shows against a background of the modern version of the Taunton flag. 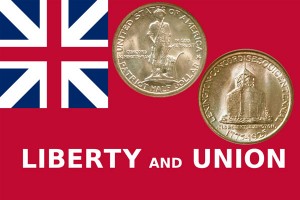