The Burlington Jubilee — The train by the lower route of Vermont railway experienced some interruption yesterday from the results of the violent storm of last week, and did not arrive in the city until 10 o’clock— two hours and a half late.

It brings us a full report of the proceedings of the Burlington jubilee, which passed off very agreeably.

At two o’clock the procession formed and marched to Mr. Wright’s large pavilion, in one half of which were already assembled the ladies who wished to hear the speaking.

A sumptuous entertainment was provided, at which Judge Follet presided. A series of spirited toasts called up, in succession, Gov. Paine, Hon. Josiah Quincy, jr., (who made a very brilliant and eloquent speech,) Lieut. Gov. Pierpont, E. H. Duby, esq., S. A. Walker, esq., Hon. Stephen C. Phillips, (who replied very eloquently for Massachusetts,) and Mr. Plumer, of New Hampshire, and Col. Schouler of the Atlas. A number of witty volunteers added to the enlivenment of the dinner, which missed off very pleasantly, the company separating about seven.

Among other letters received and read on the occasion wee the following, from General Taylor:

Gentlemen: I have duly received your letter of the 5th instant, inviting me to attend a “railroad jubilee,” to be held in Burlington on the 25th instant.

It would afford me the highest gratification to be present on that interesting occasion, and to mingle my congratulations with those of the citizens of Burlington and of Vermont at the completion of the great lines of internal communication, which not only bring great physical advantages to the town and State, but bind together yet more firmly that union which all true patriots are interested to preserve, and which I am sure Vermont would be among the last to relinquish.

But the obligations of official duty do not permit me to leave the seat of government at this time; and I am obliged, therefore, to decline the very courteous invitation of the citizens of Burlington, which I do with regret; and with my best thanks and good wishes, I remain, with great respect, your friend and servant,

In the evening a large number of ladies and gentlemen attended an agreeable ball, on the floored part of  the pavilion; so that the exercises of the day proved throughout quite satisfactory.

In the morning there was a meeting of editors, at which about fifty were present, and interchanged friendly greetings.

Yesterday there was a Masonic celebration of St. John’s birthday.

The people of Burlington have been unwearied in their attention to the comfort of their guests, and the committee of management have arranged everything in the most satisfactory manner.

The Rutland [VT] Herald newspaper of July 4, 1850 printed a different viewpoint, somewhat dissatisfied with the celebration:

If we are to measure the result of this affair with reference to the great things promised and predicted, — then must we set the whole down as a positive failure. In saying this, however, we would, in passing say, that there was no failure in the arrangements of John Wright; and if any occurred in connection with the Pavillion, it must have been the failure on his part to receive his just return for one of the most beautiful displays of the kind we have ever chanced to witness.

In the above remarks we do not wish to be understood as saying that the occasion was not a brilliant, a joyous and noble one; but simply that as expectation was so highly raised—many, finding not quite all of ‘creation’ present, were much disappointed; and consequently a coldness seemed to rest over, and around the festivities of the day, that could not be disguised, nor overcome.

Mr. Buckingham—the old and somewhat facetious editor of the Boston Courier—once remarked, in speaking of a grand affair on Boston Common, that there were ‘seats enough—but too many folks!’

On this occasion the thing was exactly reversed; there were people enough—but too many seats, and too much room.

The brief speeches made within the pavilion were of a high order, and well calculated to interest all who care for railroads, or the general improvement of the day,—and especially those which tend to the continued prosperity of New England.

The meeting was called to order, on arising from the table, by the Hon. Timothy Follett—who, after a beautiful voluntary by the band, proceeded to make an exceedingly interesting address on the progress of railroads in Vermont, and the general improvements consequent, and which are going on all around us.

His handsome greeting and welcome to the Boston people to the Green Mountain State, on their first public appearance among us, was in an excellent vein and elicited hearty applause on all sides.

On the reading of the second toast complimentary to the Vermont Central, and Rutland & Burlington roads, — Ex Gov. Paine made a short address in which it warmly congratulated the people of Vermont and Massachusetts on the succes of these two enterprises, and on their now being placed in such a favorable position for the free interchange of thoughts, men, merchandise, and all the varied commodities of the country.

Lieut. Gov. Pierpont rose on a toast being given for Vermont, and in offering his rejoicing over the success of railroads in Vermont, and the prospective advantages likely to grow out of them, gave a  lively and happy description of the different roads, &c.

But, we have neither the time nor the space to make even an allusion to all the good things said by the different speakers of the day; nor is this necessary when we say that the Hon. Josiah Quincy, Jr., of Boston, S. C. Philips, Esq., of Salem, Mass., Mr. Samuel A. Walker, Mr. Schouler, of the Boston Atlas, Hadley, of Troy, and other distinguished gentleman from abroad— all made earnest and eloquent addresses on the occasion.

The festivities of the day were closed by a gay and brilliant party who assembled within the pavilion for dancing and mutual association. This was a decidedly rich affair, and we know not where we have seen a more splendid display than was made on this occasion.

The music was by Flagg’s Band, of Boston, and was excellent The company departed about 4 o’clock, and thus ended the great railroad jubilee; and which, if, as we have before said, it was not quite all that was expected—was at least an occasion of much gratification to many who will long retain a pleasant recollection of it.

The Vermont State Quarter Coin shows with an image of a flyer for the Great Southern and Eastern Lines, the Vermont Central Railroad, circa 1857. 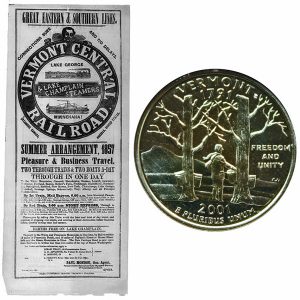