First, let’s look at the company then at the new engine and railway system.

From Poor’s Manual of Railroads, Volume 5, published in 1872:

Opened to Colorado Springs October 23, 1871. Will be opened a total length of 120 miles (to Pueblo) in March, 1872; and an additional length of 65 miles to Cañon City and Alamo will be opened before the close of same year.

Surveys are in progress to Santa Fé and the St. Louis Valley.

The first narrow-gauge engine built in the United States was shipped from the works of M. Baird & Co., Philadelphia, July 13, 1871.

The American Artisan Weekly Journal of August 23, 1871 provided the specifications of this new narrow gauge system:

The locomotive illustrated upon this and the preceding pages, with two others for freight service, has just been completed at the Baldwin Locomotive Works, Philadelphia, and by the time this meets the public eye will undoubtedly be at work on the pioneer narrow-gauge line in the United States.

As this machine is entitled to the designation of the first narrow-gauge passenger locomotive built or operated in this country, a brief description of it, which we take from the Railroad Gazette, Chicago, will be of interest both to the railroad and general public.

Its dimensions are as follows:

It will be seen that the rigid wheelbase is given as 6 feet 3 inches, the distance between centers of driving-wheels.

This is due to the fact that the   leading or pony-wheels are fitted with a swing bolster and radius-bar, allowing them to move laterally under the engine in passing curves.

These wheels are also equalized with the front pair of drivers.

By this arrangement, while the pony truck assists in guiding the engine on a curve, and so relieves the front pair of drivers from the excessive wear of tires which would otherwise result, the rigid wheelbase is reduced so that the engine will pass curves of very short radii without difficulty.

It is, in fact, only about two-thirds that of the four-wheeled cars designed and built for the same road.

As much interest attaches to the subject of the speed practicable on narrow-gauge roads, we may remark that the proportions of this machine are such that it develops the same total travel of piston in going one mile as does a locomotive having 24 inches stroke of piston and driving-wheels 5 feet in diameter.

It is therefore apparent that equal or nearly equal speeds are possible with this engine as with the engine of the usual pattern on the full gauge, i.e., 24 inches stroke and 5 feet drivers.

The plan of this engine gives somewhat more than four-fifths of the whole weight on the drivers, so utilizing it for adhesion.

Its tractive power on a good rail, exclusive of the resistance of curves, is as follows:

From these figures should be deducted 17 gross tons, the weight of the engine and tender in working order, to get the total weight of cars and lading which can be drawn on a level or on the grades named.

The freight locomotives built for the same road have three pairs of drivers and a swing-bolster pony-truck.

Their cylinders are 11 inches diameter and 16 inches stroke; drivers, 36 inches.

The total weight of engine in working order is 33,500 pounds, of which about 29,000 pounds are on the drivers.

Being distributed to three pairs of wheels, the weight on each pair of drivers is a little less than 10,000 pounds, nearly the same result as with the passenger engine.

We hope to give a full description of the freight locomotive also at an early day. 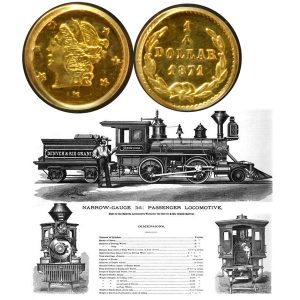