Today, the California Fractional Gold Coin remembers when George Vancouver and his adventuring party road horseback to Santa Clara on November 20, 1792, the first Anglo-Saxons to visit that far inland.

From the book With the Flowers and Trees in California by Charles Francis Saunders, published in 1919:

Vancouver made two or three stops at different times at California ports.

The first was in November, 1792, when he spent some time in the harbor of San Francisco, and he has left a record of what was probably the first Anglo-Saxon picnic on California soil.

He had secured permission from the Spanish authorities to make a horse-back trip to the Mission at Santa Clara, some forty miles south; and it is interesting to read of the Englishman’s delight at that time in a region which is still famous for its pastoral and sylvan loveliness.

“About noon,” writes Vancouver, “we arrived at a pleasant and enchanting land situated amid a grove of trees at the foot of a small hill by which flowed a very fine stream of excellent water.

“This delightful pasture was nearly enclosed on every side and offered sufficient space for resting of ourselves and baiting our cavalry.

“The bank which overhung the murmuring brook was well adapted for taking the refreshment which our provident friends had supplied; and with some grog we had brought from the ship (spirits and wine being scarce articles in this country), we made a most excellent meal; but it required some resolution to quit so lovely a scene of beauty which was greatly heightened by the delightful serenity of the weather.”

Proceeding somewhat further the Vancouver party entered a country which, the record tells us, “we little expected to find in this region. For about twenty miles it could only be compared to a park which had originally been closely planted with the true old English oak; the under wood that had probably attended its early growth had the appearance of having been cleared away and had left the stately lords of the forest in complete possession of the soil, which was covered with luxuriant herbage and beautifully diversified with pleasing eminences and valleys; which with the range of lofty mountains that bounded the prospect, required only to be adorned with the neat habitations of an industrious people to produce a scene not inferior to the most studied effects of taste in the disposal of grounds.”

Vancouver was looking upon what was a very common sight throughout a large part of California in primitive times, and a sort of landscape that is by no means yet cultivated out of existence — natural open groves of the stately coast live-oak trees which have from the first been the delight of all travelers in the State.

Often herds of grazing horses and cattle, and of wild deer, helped the likeness to the parks of the Old World nobility.

The California Fractional Gold Coin shows with an image of the Santa Clara Valley, circa 1874. 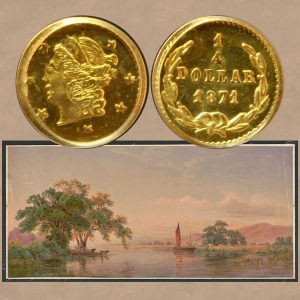