From The Klondike Stampede By Tappan Adney, published in 1900:

“There,” he thought, “is a poor devil who hasn’t struck it.”

He went down to where Carmack was, told him of his prospects on Gold Bottom, and said to him that he had better come up and stake. At first Carmack did not want to go, but Henderson urged.

At length Carmack consented to go, but wanted to take the Klondike Indians up also, as well as his own. Henderson demurred at that, and, being frank, may have said something not complimentary about “Siwashes” in general.

It has been reported that Henderson said he “didn’t intend to stake the whole Siwash tribe,” and he added, “I want to give the preference to my old Sixty-Mile friends.”

What effect this may have had on subsequent events I do not know ; I can only surmise that it did have some.

Next morning Henderson went on to his claim on Gold Bottom.

Carmack with two Indians followed soon, but, instead of taking the circuitous route by the mouth of Gold Bottom, went up “Rabbit Creek.” Carmack ar rived soon after Henderson, and showed some “colors” of gold that he had found on “Rabbit Creek.”

“Colors ” and “pay” are by no means to be confounded. Traces, or “colors,” of gold are to be found almost everywhere.

The Indians and Carmack staked each a claim on Gold Bottom.

When they were ready to go, Henderson asked Carmack if he intended to prospect on the way back, to which he replied that he did. Then Henderson asked him, if he found anything, to send back one of his Indians, saying that he had gold, and that he would pay him for the trouble; which, Henderson asserts, Carmack said he would do.

Leaving Henderson and his partners at work, Carmack returned homeward as he came.

A few miles’ walk along the bald crest of the divide brought him into the forks of “Rabbit Creek,” some distance from its head. Five miles beyond, in the thick spruce-timbered valley, a tributary about as large as “Rabbit Creek ” puts in on the left-hand side.

About half a mile below this large tributary the party stopped to rest. They had been panning here and there. Carmack, it is said, went to sleep; Skookum Jim, taking the pan, went to the “rim” of the valley at the foot of a birch-tree and filled it with dirt.

Washing it in the creek, he found a large showing of gold. Right “under the grass-roots,” Jim said, he found from ten cents to one dollar to the pan.

In a little while, it is said, they filled a shot-gun cartridge with coarse gold.

A strange circumstance was that this gold was not from bed-rock, which was many feet below the surface, nor even the present creek-bed, but, unsuspected by them, had slid down from the “bench,” or hill-side, a kind of diggings which were unknown at that time.

Carmack staked off Discovery (a double claim) for himself, and five hundred feet above and below for his two Indian companions, Skookum Jim taking No. 1 above Discovery, and Cultus Charlie No. 1 below.

The date of this is variously given as the 16th and 17th of August, the former date being generally regarded as the probable one.

After staking, they hastened to Forty-Mile, forgetting their promise to Henderson, who by every moral right was entitled to a claim near the rich ground they undoubtedly had discovered.

They recorded their claims before Inspector Constantine, the recorder or acting gold commissioner, and named the creek “Bonanza.”

Carmack’s own story of “$2.50 to the pan” was not believed, though it was not doubted that he had found gold.

Drunken men were thrown into boats. One man was tied and made to go along. But there was no excitement beyond what attends a stampede for locations on any creek on which gold has been found.

There are always persons about a mining camp ready to start on a stampede simply as a chance, whether good prospects have been found or not.

Whole creeks have been staked out in the belief that gold would subsequently be found. So the excitement of this earlier stage was of small significance.

It was that of the professional “stampeder,” so to speak — rounders about the saloons, some new arrivals, but few old miners, the latter being still in the diggings up the creek.

The first persons to arrive at the scene of the new discovery began staking down-stream. That also was a “stampeder’s ” custom. The chances were considered better there than above.

It is all nonsense, the talk now of persons who would have one believe they “got in on choice locations ” by reason of superior foresight. It was blind luck.

The staking went on down-stream for six miles, and then began above, and continued for seven or eight miles up-stream before the side gulches, or “pups,” as they are called, were thought of seriously.

The Standing Liberty Gold Quarter Coin shows with an image of the Discovery Claim in August 1897. 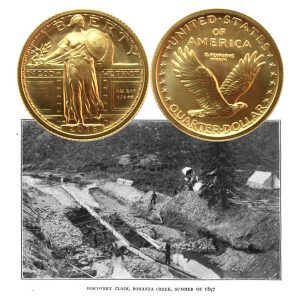