Today, the First Flight Half Dollar Coin remembers the navy’s trans-Atlantic adventure and their successful first leg completed on May 17, 1919.

From the Ottawa, Illinois Free Trader-Journal newspaper of May 17, 1919:

Two Other Ships Reported to Have Completed Flight

London, May 17. All three of the American sea planes which left Trepassey, New Found land, last night, have reached the Azores, their first stop, according to dispatches reaching London this afternoon.

Punta Del Gada Azores Islands, May 17. The American navy sea plane NC-4 in charge of Lieutenant Commander A. C. Read, alighted in the harbor of Horta, capital of the Island of Fayal (Azores group), at 1:25 this afternoon, 9:25 New York time, having made the 1,300-miIe trip from Trepassey, N. F., in fifteen hours and eighteen minutes.

The NC-4 made tremendous speed, arriving ahead of schedule.

Lieu. Com. Read maintained an average speed of about ninety miles an hour all the way across the Atlantic.

Wait Word From Others.

Washington, May 17. The navy department at 2:30 o’clock had been without word from the trans-Atlantic planes since 11 o’clock, when word of the arrival of the NC-4 at Horta was flashed.

Previous to that time the NC-3 had been reported off her course and the NC-1 was supposed to be pushing the NC-4 for the honor of being the first to reach the Azores.

Navy department officials were not concerned, however, over the lack of reports. Word from the Azores was that the weather was extremely misty and it was assumed that the aviators were utilizing their radio compass direction finder. When these are in use, it was stated, it was impossible for them to send messages.

Washington, May 17.The progress of the three airplane from Trepassey to the Azores at 2:25 a. m., Washington time, was 125 knots ahead of the estimated schedule, according to a message from the navy representative at Trepassey.

“At the above time,” the dispatch said, “the planes were reported as having passed station ship 13, 650 knots out.

Washington, May 17. The NC-4 passed station 18, nine hundred miles from Trepassey at 5:45 this morning the navy department was informed.

The message came from the U. S. S. Columbia, stationed at Rorts in the Azores, and was received by the navy department at 9 o’clock.

Punta Del Gada, Azores. May 17.–The United States navy seaplanes NC-4 and NC-1 were leading the NC-3 in the great trans-Atlantic flight from Trepassey, N. F., according to reports reaching here at 10 o’clock, Azores time.

The weather this morning was humid and foggy.

Thousands of persons will witness the arrival of the Americans here and the island officials will be the quests of Admiral Jackson.

Upon landing the flying crews will go upon the United States naval supply ship Melville for a much needed rest.

In the meanwhile a squad of mechanics will be overhauling the sea planes.

Captain Ward K. Worlman, flotilla commander, announced that everything is in readiness for a hasty continuance of the flight to Lisbon. The efficient navy men have not overlooked the smallest detail.

Fourteen United States destroyers are at their stations to keep up communication and give assistance, if needed.

The indications this morning were that the airmen would continue their flight to Portugal within forty-eight hours of the landing here. The Lisbon leg of the journey is 750 miles.

Punta Del Gada is picturesque with many American flags flying.

Washington. May 17. The NC-4, leading in the trans-Atlantic flight, passed station 22, which is 1100 miles from Trepassey, at 8:10 this morning, the navy department was informed from the Azores.

The three giant seaplanes, the NC-1, NC-3 and NC-4, commanded by Commander John H. Towers, after preparatory cruising about the harbor, took the air at 7:40 p. m. and sped eastward over the sea, quickly disappearing over the horizon on their voyage, of approximately 1200 miles to the Azores.

Their departure was unofficially timed as 10:10 p. m, Greenwich, or 7:10 p. m, Chicago time. They are expected to make the journey in eighteen and one-half hours if all goes well.

The NC-3, flagship of the seaplane squadron, with the NC-1, delayed the start, originally set for 3 p. m. (5:30 p. m. Greenwich time), until shortly after 6 o’clock, waiting forhte NC-4 to get ready to cast off.

The NC-3 was the first to start. She taxied across the harbor for the “take off” at 3:41 Chicago time.

The NC-1 began her cruise across the bay twelve minutes after the NC-3 cast off.

Half an hour later the flagship left her moorings the NC-1 and NC-3 were still cruising on the surface of the harbor wafting for the NC-4 to start.

The NC-4 set out forty-five minutes behind the NC-1.

After a twenty-five minutes’ surface cruise the NC-4 took the air and in full flight, headed for the open sea after the NC-3 had failed in two attempts to leave the water. The flagship and the NC-1 were still cruising in the harbor when the “4” winged off toward the east.

All three planes were in the air at 5:10 Chicago time and a few moments later disappeared over the eastern horizon.

It was estimated that if all went well and the airmen did not encounter strong head winds, they would reach Punta Del Gada in the Azores between 9 and 10 o’clock this morning, New York time.

The airmen throughout the night maintained an average speed of 90 miles an hour, which was nearly 30 miles an hour better than had been set for them.

High praise is heard on every hand for the efficiency of the United States navy. The three pilots, Commander J. H. Towers, Lieutenant Commander Patrick Bellinger and Lieutenant Commander A. C. Read, were confident when they departed that they would bring the signal honor of the first trans-Atlantic flight to the American navy.

The mighty planes got away almost simultaneously while the crowd on the beaches and the sailors on the United States war craft in the harbor cheered and flung their hats into the air. The NC-3 was the first to go aloft, leaving the water at six minutes after 6 o’clock. New York time.

At nine minutes after 6 o’clock the NC-1 soared upward maneuvering in graceful circles for position. The three mighty planes sailed over the harbor several times, then took a trial formation and the epoch making, flight, was on.

As the airmen passed out of sight of land the wireless began to sputter and the American relay ships began picking up messages. They were also picked up by the Marconi station at Cape Race.

The weather was ideal for the start of the flight. There was a gentle breeze and the sun was shining.

“This is fine,” remarked Commander Towers, the “admiral of America’s air fleet.” His order for the beginning of the flight consisted of two words, “Let’s go.”

Features of the “Big Hop.”

Left Trepassey for Azores May 16.

Distance of the trans-Atlantic leg of flight, 1,352 nautical miles.

The First Flight Commemorative Half Dollar Coin shows with an image of the NC-4 seaplane, circa 1919. 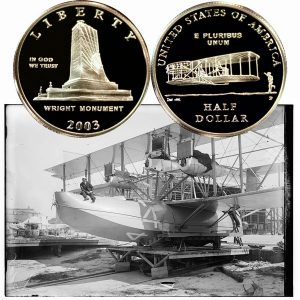