In February, 1717, fell the greatest snow ever known in this country, or, perhaps, in any other. So deep was it, that people stepped out of their chamber windows on snow shoes.

With this fall of snow there was a terrible tempest; eleven hundred sheep, the property of one man, were found dead; one flock of a hundred, on Fisher’s Island, were found buried sixteen feet in the snow; two of them only were alive, they having subsisted on the wool of their companions twenty-eight days after the storm.

The following account of this snow storm was written by Dr. Cotton Mather, and preserved amongst the manuscript volumes of the Massachusetts Historical Society. It is a curious relic, and will serve to show the doctor’s method of writing.

Tho’ we are got so far onward as the beginning of another winter, yet we have not forgot ye last, which at the latter end whereof we were entertained & overwhelmed with a snow, which was attended with some things, which were uncommon enough to afford matter for a letter from us.

Our winter was not so bad as that wherein Tacitus tells us that Corbulo made his expedition against the Parthians, nor that which proved so fatal to ye beasts & birds in ye days of ye Emperor Justinian, & that the very fishes were killed under ye freezing sea, when Phocas did as much to ye men whom tyrants treat like ye fishes of ye sea.

But ye conclusion of our winter was hard enough, and was too formidable to be easily forgotten, & of a piece with what you had in Europe a year before.

The snow was ye chief thing that made it so. For tho’ rarely does a winter pass us, wherein we may not say with Pliny, Ingens Hyeme Nivis apud nos copia, yet our last winter brought with it a snow, that excelled them all.

The snow, tis true, not equal to that, which once fell & lay twenty Cubits high, about the beginning of October, in the parts about ye Euxine Sea, nor to that which ye French Annals tell us kept falling for twenty-nine weeks together, nor to several mentioned by Bœthius, wherein vast numbers of people, & of cattle perished, nor to those that Strabo finds upon Caucasus & Rhodiginus in Armenia.

But yet such an one, & attended with such circumstances, as may deserve to be remembered.

On the twentieth of the last February there came on a snow, which being added unto what had covered the ground a few days before, made a thicker mantle for our Mother than what was usual:

And ye storm with it was, for the following day, so violent as to make all communication between ye neighbors everywhere to cease. — People, for some hours, could not pass from one side of a street unto another, & ye poor women, who happened in this critical time to fall into travail, were put unto hardships, which anon produced many odd stories for us.

But on ye twenty-fourth day of ye month, comes Pelion upon Ossa:

Another snow came on which almost buried ye memory of ye former, with a storm so famous that Heaven laid an interdict on ye religious assemblies throughout ye country, on this Lord’s day, ye like whereunto had never been seen before.

The Indians near an hundred years old, affirm that their Fathers never told them of anything that equaled it.

Vast numbers of cattle were destroyed in this calamity.

Whereof some there were, of ye stranger sort, were found standing dead on their legs, as if they had been alive many weeks after, when ye snow melted away.

And others had their eyes glazed over with ice at such a rate, that being not far from ye sea, their mistake of their way drowned them there.

One gentleman, on whose farms were now lost above 1100 sheep, which with other cattle, were interred (shall I say) or innived, in the snow, writes me word that there were two sheep very singularly circumstanced.

For no less than eight and twenty days after the storm, the people pulling out the ruins of above an 100 sheep out of a Snow-Bank, which lay 16 foot high, drifted over them, there was two found alive, which had been there all this time, and kept themselves alive by eating the wool of their dead companions.

When they were taken out they shed their own fleeces, but soon got into good case again.

Sheep were not ye only creatures that lived unaccountably, for whole weeks without their usual sustenance, entirely buried in ye snow-drifts.

The swine had a share with ye sheep in strange survivals. A man had a couple of young hogs, which he gave over for dead, but on the twenty-seventh day after their burial, they made their way out of a snow- bank, at the bottom of which they had found a little tansy to feed upon.

The number of creatures that kept a rigid fast, shut up in snow for divers weeks together, & were found alive after all, have yielded surprising stories unto us.

The wild creatures of ye woods, ye outgoings of ye evening, made their descent as well as they could in this time of scarcity for them, towards ye seaside.

A vast multitude of deer, for ye same cause, taking ye same course, and ye deep snow spoiling them of their only defense, which is to run, they became such a prey to these devourers, that it is thought not one in twenty escaped.

But here again occurred a curiosity. These carnivorous sharpers, & especially the foxes, would make their nocturnal visits to the pens, where the people had their sheep defended from them.

The poor ewes big with young, were so terrified with the frequent approaches of ye foxes, & the terror had such impression on them, that most of ye lambs brought forth in the spring following, were of Monsieur Reinard’s complexion, when ye dam, were either white or black.

It is remarkable that immediately after ye fall of ye snow an infinite multitude of sparrows made their appearance, but then, after a short continuance, all disappeared.

It is incredible how much damage is done to ye orchards, for the snow freezing to a crust, as high as the boughs of ye trees, anon split ym to pieces.

The cattle also, walking on ye crusted snow a dozen foot from ye ground, so fed upon ye trees as very much to damnify them.

The ocean was in a prodigious ferment, and after it was over, vast heaps of little shells were driven ashore, where they were never seen before.

Mighty shoals of porpoises also kept a play-day in the disturbed waves of our harbors.

The odd accidents befalling many poor people, whose cottages were totally covered with ye snow, & not ye very tops of their chimneys to be seen, would afford a story.

But there not being any relation to philosophy in them, I forbear them.

And now Satis Terris Nivis. And there is enough of my winter tale.

If it serve to no other purpose, yet it will give me an opportunity to tell you that nine months ago I did a thousand times wish myself with yon in Gresham College, which is never so horribly snow’d upon.

But instead of so great a satisfaction, all I can attain to is the pleasure of talking with you in this Epistolary way & subscribing myself

Syr Yours with an affection that knows no Winter,

The Massachusetts State Quarter Coin shows with an artist’s portrayal of Cotton Mather. 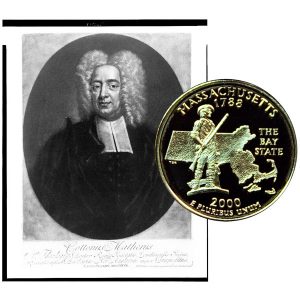