Today, the Statue of Liberty Commemorative Silver Dollar Coin remembers when the US Patent Office approved the request for the design on February 18, 1879.

From the patent documents:

Desgn for a Statue.

Be it known that I, AUGUSTE BARTHOLDI, of Paris, in the Republic of France, have originated and produced a Design of a Monumental Statue, representing “Liberty enlightening the world,” being intended as a commemorative monument of the independence of the United States; and I hereby declare the following to be a full, clear, and exact description of the same, reference being had to the accompanying illustration, which I submit as part of this specification.

The statue is that of a female figure standing erect upon a pedestal or block, the body being thrown slightly over to the left, so as to gravitate upon the left leg, the whole figure being thus in equilibrium, and symmetrically arranged with respect to a perpendicular line or axis passing through the head and left foot.

The right leg, with its lower limb thrown back, is bent, resting upon the bent toe, thus giving grace to the general attitude of the figure. The body is clothed in the classical drapery, being a stola, or mantle gathered in upon the left shoulder and thrown over the skirt or tunic or under-garment, which drops in voluminous folds upon the feet.

The right arm is thrown up and stretched out, with a flamboyant torch grasped in the hand.

The flame of the torch is thus held high up above the figure. The arm is nude; the drapery of the sleeve is dropping down upon the shoulder in voluminous folds.

In the left arm, which is falling against the body, is held a tablet, upon which is inscribed “4th July, 1776.” This tablet is made to rest against the side of the body, above the hip, and so as to occupy an inclined position with relation thereto, exhibiting the inscription. The left hand clasps the tablet so as to bring the four fingers onto the face thereof.

The head, with its classical, yet severe and calm, features, is surmounted by a crown or diadem, from which radiate divergingly seven rays, tapering from the crown, and representing a halo.

The feet are bare and sandal-strapped.

This design may be carried out in any manner known to the glyptic art in the form of a statue or statuette, or in alto-relievo or bass relief, in metal, stone, terra-cotta, plaster-of-paris, or other plastic composition.

It may also be carried out pictorially in print from engravings on metal, wood, or stone, or by photographing or otherwise.

What I claim as my invention is—

The herein-described design of a statue representing Liberty enlightening the world, the same consisting, essentially, of the draped female figure, with one arm upraised, bearing a torch, while the other holds an inscribed tablet, and having upon the head a diadem, substantially as set forth.

In testimony whereof I have signed this specification in the presence of two subscribing witnesses.

The Statue of Liberty Commemorative Silver Dollar Coin shows with an image of Bartholdi’s design in the patent request, circa 1879. 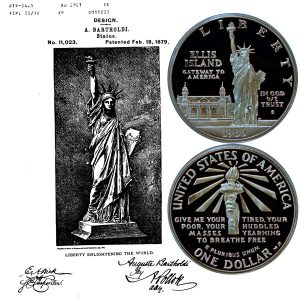