Today, the Baseball Commemorative Half Dollar Coin remembers the signing of J. Franklin “Home Run” Baker to the New York Yankees on February 15, 1916.

From the newspaper The Sun of New York on the following day:

Makes Team a Sure Pennant Contender

J. Franklin (Home Run) Baker, one of the most picturesque figures of the diamond, is the property of the New York American League Club.

Col. Jacob Ruppert and Capt. T. L. Huston, joint owners of the Yankees, purchased the release of this redoubtable slugger from Manager Connie Mark of the Athletics yesterday afternoon.

The deal, which is undoubtedly the most important one in which the local American league club ever figured, was consummated early yesterday afternoon In the Colonel’s, office at his brewery, Ninety-second street and Third avenue. By 5 o’clock yesterday afternoon Baker had signed a contract with Messrs. Huppert and Huston for the seasons of 1916, 1917 and 1918.

The terms of Baker’s purchase were not made public. On good authority however, it has been learned that both Mack and the home run clouter were reasonable—they took nothing like the $50,000 Charles A. Comiskey of the White Sox Is reported to have offered for the third baseman’s services.

Mack Glad Yanks Got Him.

“I am pleased.” said Connie after the sale, “that Baker Is a member of the Yankees. He is a great ball player and should help Donovan’s club. When we came to a parting of the ways I realized that it would be to my personal advantage to place Frank with the New York club if possible. Everyone can appreciate the value of a winner in New York. Furthermore Baker is bound to be a greater attraction in New York than elsewhere, for it was here in the world series of 1911 that he won his sobriquet. The owners of the New York club have proved themselves genuine sportsmen and I am glad that I have been able to help them in their most generous plans for an uplift in New York.”

“I am satisfied.” said Col. Ruppert, “that the Yankees should lilt themselves this year out of the joke class anyhow. Our crying need was hitters. Baker and Magee are strong additions In this line, I am sure. It has been my dearest ambition to give the New York American League fans a team worthy of their affections. If we should be disappointed In our aim Capt. Huston and myself will have at least the comfort of knowing that we did our very best for our patrons.”

Upon signing his three year contract J. Franklin Baker immediately communicated with Manager Bill Donovan. The Trappe, Md., farmer did not try to conceal the fact that he was delighted with the prospect of appearing regularly before New York crowds. He will accompany the veterans to Macon, Ga., on March 1. Baker, who lives the open air winter life on his farm, pronounces himself sound and fit in wind an limb and ready for another successful major league campaign.

With the possible exception of Ty Cobb, no greater American League hero than Frank Baker ever entertained a New York baseball crowd. He earned his nickname of Home Run as a member of the Athletics in the world’s series of 1911 against the Giants. After Matty’s great pitching had clinched the opening game Baker blasted Rube Marquard’s hope in the sixth inning of the second contest by cracking the ball over the right field wall of Shibe Park while Eddie Collins was perched on second base.

In the third fame, at the Polo Grounds, with Big Six back in the box and rolling into an apparent 1 to 0 victory, Baker came up in the ninth and knotted the score with a drive into the right field bleacher. This enabled his teammates later to pound out an eleventh inning victory.

The acquisition of Baker somewhat complicates the managerial problems of Wild Bill Donovan. Bill, needless to say, will find some spot on his club for the home run king. In all probability J. Franklin will guard the third station as is his wont, displacing Fritz Maisel. The latter speed merchant is a dandy outfielder and would welcome an opportunity to play regularly in the garden. In case of an unexpected fall down in any position of the infield outside of third Baker is quite competent to plug the gap, leaving Maisel to perform as usual at the third corner. Baker plays equally well at third, short or second. Mack is of the opinion that with a little experience he would be hard to beat as a first sacker.

Team Strong in Every Way Now.

In any event it would appear that the presence of Baker is bound to assure Donovan two strong defensive lines and an offense greatly improved over anything that ever before wore the Yankee uniform. Dozens of different combinations on both the inner and outer lines are now possible in case of sickness or injury to players. Pipp and Mullen are both competent first basement; Mullen was a sensation as a second baseman during the fall tour of the all stars of the American League. Much is expected of Joe Gedeon, purchased as a second base prospect. Peckinpaugh and Angelo Aragon, the Cuban, are shortstops of class, though not as formidable at bat as could be wished. Baker and Maisel are third basemen of renown. Baker can play practically ever infield position. So can Lute Boone and Paddy Baumann, utility infielders last season, not to mention Roy Hartzell, the old war horse, who has done everything for the Yankees but pitch and catch.

With Maisel added to the outfield candidates there is a wealth of garden material —Lee Magee, Gilhooley, Hughie High, Hendryx, Miller, Cook and a band of untried colts. Furthermore, in a pinch Lee Magee is as versatile an infielder as can be found anywhere. With an army of new pitchers—among them nine southpaws—it would appear that the long delayed Yankee uplift is at last more substantial than daydreaming.

J. Franklin Baker will be thirty years of age March 13. He began his baseball career at 20 with an amateur team in Ridgely, Md. In 1907 and 1908 he played third base for a team managed by Charlie Herzog at Cambridge, Md. He opened the regular season of 1908 with Reading of the Tri-State League. That fall Connie Mack purchased the sensational minor league slugger.

Baker and Eddie Collins, who earned regular positions in 1909, were largely instrumental in perfecting Connie Mack’s famous $100,000 infield, which in five years won four American League pennants and three world’s championships. His first year out he hit for .305, led the league with nineteen triples and stole twenty bases. In 1910 Baker hit .283, stole twenty-one bases, made twenty-five doubles, fifteen triples and two home runs. He hit .408 in the world’s series against the Cubs that fall.

In 1911 Baker led the American League third basemen in fielding. He batted .334, leading with nine homeruns. He had forty doubles and fourteen three base hits. He stole thirty-eight bases. He batted .375 in the world’s series against the Giants and beat McGraw’s men almost single handed. Again in 1912 Baker led his company in home run hitting and the American third basemen in fielding. He batted .347, stole forty bases, cracked out ten homers, twenty-one three ply blows and forty-two base hits. He had a find batting average of .347. His last year in fast company, 1914, Baker batted .319, fielded .955 and stole nineteen bases.

The Home Run King did not play with the Athletics last season. A dispute with Connie Mack over salary led Baker to the refutation of a term contract and his announced retirement from fast company. This following the sale of Eddie Collins, also dissatisfied, to the White Sox prompted Mack to break up his pennant trust.

Though he did not campaign through the American League last season Baker was not idle in his profession. He was one of the stars of the Upland team of the Delaware County League, a semi-pro organization, which kept his eye in trim with several games each week. Therefore it is to be expected that Baker will start in with the Yankees just about where he left off with the Athletics in 1914. That is just about the most that could be expected from any man in the game.

The Baseball Commemorative Half Dollar Coin shows with an artist’s image of J. Franklin Baker, the Home Run King, circa 1916. 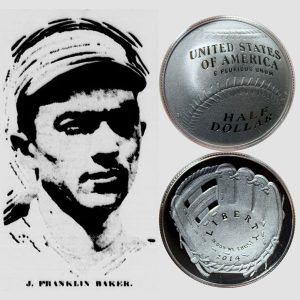