Today, the New Hampshire State Quarter Coin remembers the order from the king  that came as a message on December 13, 1774 that forbade the export of gunpowder and military stores to America.

Similar to the efforts in Rhode Island, the patriots in New Hampshire chose to liberate the gunpowder and small arms from the British.

In response to the recommendations of this meeting of the ex-members of the House of Assembly, deputies to the number of eighty-five assembled in convention at Exeter, on the 21st day of July, 1774, and chose John Wentworth of Somersworth chairman.

Maj. John Sullivan and Col. Nathaniel Folsom were elected delegates to the Continental Congress, to assemble at Philadelphia on the 5th day of September, and John Giddinge was made treasurer and instructed to receive and pay over to them the contributions made by the several towns to defray their expenses.

A committee was also appointed, consisting of Hon. John Wentworth of Somersworth, Hon. Meshech Weare, Col. Josiah Bartlett, Col. Christopher Toppan and John Pickering, Jr., “to give general Instructions to Delegates” and fill any vacancy in the delegation, if such should occur.

The deputies then Voted, unanimously, That the Deputies recommend it to their respective Towns to take into Consideration the distressed unhappy Condition of the Town of Boston, and liberally to contribute towards the Relief of the Poor of that Town, according to the noble and laudable Example of their Sister Colonies.

Having passed this vote, the convention dissolved.

Of whom it was composed there is but little knowledge to be had, inasmuch as the roll of its members, if any was ever made, has been lost.

It seems to have been in session but a single day; but it did a timely and very important work and was the first popular political body which ever deliberated and acted in New Hampshire free of royal espionage.

It fairly deserves the name since assigned to it, of our “First Provincial Congress.”

Most of the events just mentioned occurred in the summer of 1774. Later in the year others greatly excited the people of New Hampshire.

The carpenters of Boston refused to build barracks  for the British soldiers sent to hold the people in subjection.

Thereupon, General Gage applied for men to Governor Wentworth, who secretly complied with his request. This action of the governor soon become known, and caused much popular dissatisfaction.

The landing at Portsmouth on the 25th of June of twenty-seven chests of tea, and of thirty more on the 8th of October, also greatly increased popular discontent, which was allayed only by its reshipment, in both instances, to Halifax.

On the 13th of December a copy of an order of the King in Council, forbidding the export of gunpowder and military stores to America, came by express to Portsmouth.

As soon as known, the purport of this order greatly increased the existing excitement, and resulted in a gathering the next day of an indiscriminate company, which went to Fort William and Mary, and after capturing the guard in possession, seized and carried away an hundred barrels of gunpowder.

On the day following, another raid was made upon the defenseless fort, and all the small arms found there, with fifteen of the lighter cannon, were also borne away.

It is unnecessary to inquire who composed these two companies.

It will suffice to say that Maj. John Sullivan and Capt. John Langdon were conspicuous participants in these bold enterprises, and that the work accomplished received the hearty approval of the patriots of the Province.

For it they later received formal thanks.

After a few days had elapsed, the Scarboro frigate and the Canseau sloop arrived at Portsmouth with several companies of soldiers, which took possession of the unoccupied fort and of the heavy cannon which had not been removed.

While their presence may not have been agreeable to the people of the Provincial capital, it was doubtless welcomed by the governor, who, up to this time, had had no reliable military support.

Thus in a gloom of popular discontent and anxiety the year of 1774 passed away, and gave place to the more eventful one of 1775.

The long-cherished hope of settling our grievances with the mother country by peaceable means grew fainter day by day, but it was to be the act of our enemies, and not ours, to destroy it utterly.

From the Provincial Papers Documents and Records Relating to the Province of New Hampshire from 1764 to 1776, compiled by Nathaniel Bouton and published in 1873:

Copy of an Extract of a Letter from Governor Wentworth to Governor Gage, dated Portsmouth, New Hampshire, the 16th of December, 1774.

On Wednesday last after 12 o’clock, an insurrection suddenly took place in town and immediately proceeded to his Majesty’s castle, attacked, overpowered, wounded and confined the Captain, and thence took away all the King’s powder.

Yesterday numbers more assembled, and last night brought off many cannon, &c., and about sixty muskets.

This day the town is full of armed men, who refuse to disperse, but appear determined to complete the dismantling the fortress entirely. Hitherto the people abstain from private or personal injuries; how long they will be so prevailed on, it is impossible to say.

I most sincerely lament the present distractions which seem to have burst forth by means of a letter from William Cooper to Samuel Cutts, delivered here on Tuesday last, P. M., by Paul Revere. I have not time to add further on this melancholy subject.

P. S. The populace threaten to abuse Colonel Fenton, because he has to them declared the folly of their conduct, and that he will do his duty as a justice in executing the laws. They will never prevail on him to retract, if all the men in the Province attack him. If I had had two hundred such men, the castle and all therein would yet have been safe. At this moment the heavy cannon are not carried off, but how soon they may be, I cannot say.

Ectracts of Letters to Gentlemen in New York.

We have been in confusion here for two days, on account of an express from Boston, informing that two Regiments were coming to take possession of our Fort; by beat of drum, two hundred men immediately assembled and went to the Castle, in two gondolas, who on their way were joined by one hundred and fifty more, and demanded the surrender of the Fort, which Captain Cochran refused, and fired three Guns, but no lives were lost; upon which they immediately scaled the walls, disarmed the Captain and his men, took possession of ninety-seven barrels of Powder, put it on board the Gondolas, brought it up to Town and went off with it, some distance into the country.

Yesterday the town was full of men from the country, who marched in form, chose a Committee to wait on the Governor, who assured them he knew of no such design as sending Troops, Ships, &c. This morning I hear there is a thousand or fifteen hundred men on their march to town. The Governor and Council sat yesterday on the affair, and are now meeting again.

The men who came down, are those of the best property and note in the Province.

On Wednesday last a Drum and fife pervaded the streets of Portsmouth, accompanied by several Committee-men, and the Sons of Liberty, publicly avowing their intention of taking possession of Fort William and Mary, which was garrisoned by six invalids.

After a great number of people had collected together, they embarked on board scows, boats, &c. entered the Fort, seized the Gunpowder, fired off the Guns, and carried the Powder up to Exeter, a Town fifteen miles distant.

The quantity was about two hundred to two hundred and twenty barrels; the day after, while the Governor and Council were assembled in the Council Chamber, between two and three hundred persons came from Durham, and the adjoining Towns, headed by Major Sullivan, one of the Delegates of the Congress; they drew up before the Council Chamber, and demanded an answer to the following question: Whether there were any ships or troops expected here, or if the Governor had wrote for any?

They were answered that his Excellency knew of no forces coming hither, and that none had been sent for; upon which they retired to the Taverns and about ten or eleven o’clock at night, a large party repaired to the Fort, and it is said they carried away all the small arms.

This morning about sixty horsemen accoutered, came into Town, and gave out that seven hundred more were on their march to Portsmouth, from Exeter, Greenland, New Market, &c. and would be in that Town by eleven o’clock; their intentions, it is suspected, is to dismantle the Fort, and throw the Cannon, consisting of a fine train of 42-pounders, into the sea.

The New Hampshire State Quarter Coin shows with an artist’s image of John Sullivan, circa 1776. 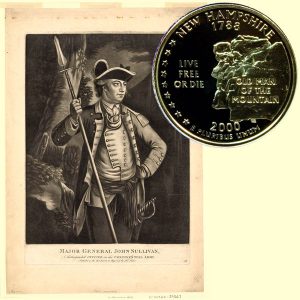