Today, the Morgan Silver Dollar Coin remembers when the New Madrid area quaked in the early morning hours of October 31, 1895.

The Charleston, Missouri, area appeared to be the center of the earthquake with the most earthen and property damage.

The Herald newspaper in Los Angeles on Friday morning, November 1, 1895, summarized the information from the major cities that felt the earthquake:

El Temblor In The East

From Chicago to New Orleans

In Missouri the Earth Opens In Great Fissures

From Which Gush Great Volumes of Water and Sand

Chicago. Oct. 31.—A distinct earthquake shock visited Chicago at 5:15 this morning, lasting about 55 seconds. No damage was done, but in many houses pictures were thrown to the floor and crockery broken. The shock was unaccompanied by an audible rumbling, coming in gently from the lake and disappearing across the prairies.

In Buena Park and other north side suburbs many persons dashed out of their houses in scanty clothing.

For several hours the electricity In the atmosphere was very oppressive to persons of nervous temperament.

Cincinnati.—An earthquake shock was felt here at 5:10 this morning—the most distinct in ten years. It began with a slight tremulous motion that continued perhaps a minute.

Then followed two or three violent undulations, shaking brick buildings and rattling windows, like a gigantic explosion. A slight roaring sound continued after the shaking ceased.

Cairo, Ill.—The earthquake at 5:09 a.m. was the severest ever felt in this section. It lasted thirty seconds. The vibrations were north and south. People left their houses for safety. Many chimneys were shaken down. The public library building was badly damaged.

Zanesville, 0.—A few minutes after 5 o’clock this morning residents in all parts of the city were aroused by a distinct earthquake shock. It caused residences to tremble violently, in some cases loosening pictures from the walls, causing stovepipes and tinware to fall from their fastenings. The trembling continued half a minute. It was the most severe earthquake ever felt in this vicinity.

Cleveland.—Two severe and distinct earthquake shocks were felt throughout Northern Ohio shortly after 5 o’clock this morning. Tall buildings swayed perceptibly and the occupants were much alarmed. Each shock lasted nearly a minute.

Quincy, Ill.—St. Antonius Catholic church and several other buildings were damaged by this morning’s earthquake. One store building will have to be torn down in consequence of the shock. Burglars blew open a safe in the village of Golden at the same moment as the earthquake. This discovery caused citizens to suppose it was the shock felt until they heard from other points. There were five shocks here and the whole lasted between two and three minutes. Across the river on the Missouri side two houses were shaken down and one woman hurt.

Topeka, Kan. — An earthquake shock was distinctly felt for half a minute at 5:12 this morning.

Memphis, Tenn.— A heavy shock of earthquake was felt here this morning. Houses rocked. The shock lasted about a minute. It was preceded by a rumbling sound.

Indianapolis.—The most pronounced earthquake shock in the memory of the citizens occurred at 5:10 this morning. It continued six or seven seconds. Every building in the city was shaken. Thousands of people were awakened.

Louisville, Ky.—An earthquake shock here at 5:10 was felt all over the city. No damage resulted.

Jackson, Miss.—An earthquake shock was felt here at 5:10 this morning, lasting over a minute. Buildings rocked perceptibly. Should another shock occur it is feared the capitol building will collapse, there being some cracks a foot wide in the walls of the third story.

Charleston, Mo.—An earthquake of unusual violence occurred here at 5:08. After the first shock the earth’s surface continued to vibrate for fully twenty minutes. Hundreds of chimneys toppled down. Plate glass in several store fronts were broken to bits. The Methodist church, a brick structure, was badly shaken. Plaster was shaken from a hundred or more interiors. In the country, four miles south, the crust of the earth was broken in fifty places and from fissures water and sand are gushing in considerable volumes. The same phenomena are reported in the district still further south; also at Big Lake, several miles north of town. This is part of an old volcanic region nearly destroyed by an earthquake eighty years ago.

Atlanta.—An earthquake was felt here distinctly at 5:10 this morning.

St. Louis.—At 5:12 a. m. several severe shocks of earthquake were distinctly felt here. The vibrations were from east to west and each shock continued several seconds. The operators in the Western Union telegraph office became alarmed and several rushed out of the building. Clocks were stopped and windows rattled, but no serious damage had as yet been reported.

Springfield, Mo.—At 5:13 a. m., today a severe earthquake shock was distinctly felt here, lasting fully ten seconds, and was followed by a second shock and rumbling noise. Windows in buiIdlngs rattled and many people ran into the street.

Omaha. —Nebraska was disturbed by this morning’s earthquake. It was general in the state. At Beatrice three distinct shocks of earthquake were felt at 5 o’clock this morning. The severity was such as to awaken most, of the sleeping population. No damage has been reported.

Louisville.—Three shocks of earthquake were felt in this city at 5:15 o’clock this morning. The first shock was preceded by a mighty roar like that of distant thunder. The shock lasted fully twenty seconds and a second and third not quite so violent lasted about twenty seconds. The vibrations were from southeast to northwest. The tall buildings in the city were violently shaken. At the Louisville hotel and the Galt house all the guests were aroused and much alarmed. In some parts of the city people were thrown from their beds. Just as the first shock was felt a bright, red light, similar to the aurora borealis, was seen in the southwest. It passed away with the shock. The shocks were felt in Jeffersonville and New Albany, Ind., but no damage is reported. 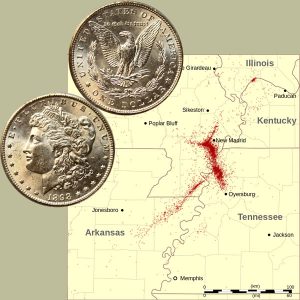