Today, the Massachusetts State Quarter Coin remembers the convention of the people who disagreed with Parliament laws and their gaining the support of the local sheriff on September 21, 1774.

From the American Archives, Fourth Series, Containing a Documentary History of the English Colonies in North America from the King’s Message to Parliament of March 7, 1774 to the Declaration of Independence of the United States prepared and published in 1837 under authority of an act of Congress:

At a Meeting of the following gentlemen chosen by the several towns in the County of Cumberland, held at Falmouth, in said county, on the 21st day of September, 1774, at the house of Mrs. Greele, viz: from

A Committee from the body of people, who were assembled at the entrance of the town, waited on this Convention to see if they would choose a Committee of one member out of each town to join them, to wait upon Mr. Sheriff Tyng to see whether he would act in his office, under the late act of Parliament for regulating the Government.

On a motion made, Voted, that a messenger be sent to the said Sheriff Tyng, to desire his attendance at this Convention.

A messenger then waited upon Mr. Tyng, with the following Billet, viz:

“Mr. Sheriff Tyng’s company is desired at the Convention of the County, now sitting at Mrs. Greele’s.

Mr. Tyng accordingly attended, and after some interrogations, subscribed to the following Declaration, viz:

“Whereas, great numbers of the inhabitants of this county are now assembled near my house, in consequence of the false representations of some evil-minded persons, who have reported that I have endeavored all in my power to enforce the late Acts of Parliament, relating to this Province: I do hereby solemnly declare, that I have not in any way whatever acted or endeavored to act in conformity to said Acts of Parliament; and in compliance with the commands of the inhabitants so assembled, and by the advice of a Committee from the several towns of this county now assembled in Congress, I further declare I will not as Sheriff of said county, or otherwise, act in conformity to, or by virtue of said Acts, unless by the general consent of the said county.

“I further declare, I have not received any commission inconsistent with the Charter of this Province, nor any commission whatever, since the first day of July last. WILLIAM TYNG.”

“At the Convention of Committees from the several towns in the said county, held at the house of Mrs. Greele, in Falmouth, in said county, September 21, 1774, voted that the foregoing, by William Tyng, Esq., subscribed, is satisfactory to this Convention. Attest, Samuel Feeman.”

The Convention then formed themselves into a Committee, to accompany Mr. Tyng to the body of the people, to present the above Declaration, and adjourned to the old Town House, at 3 o’clock, P. M.–the deliberation to be in public.

The Committee accordingly went with Mr. Tyng, who read the Declaration to the people, which they voted to be satisfactory, and after refreshing themselves, returned peaceably to their several homes.

Then adjourned to Thursday morning at eight o’clock.

The Massachusetts State Quarter Coin shows with an image of the seal of the town of Falmouth. 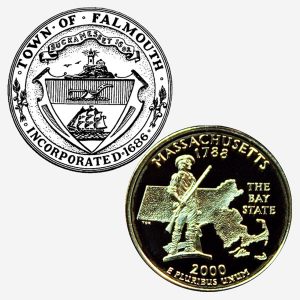