From the Historical Sketch of the Second War Between the United States of America, and Great Britain, by Charles Jared Ingersoll, published in 1845:

A grand but shy attack was made by the fleet on Fort McHenry, on the 13th.

Formed in a half circle in front of it, but keeping out of range of its batteries, bomb and other vessels fired, during that day and night, eighteen hundred bomb-shells, with multitudes of round shot and rockets, not less altogether than one hundred and sixty tons of iron engines of destruction, with no effect of intimidation or success, and without much destruction, owing to the distance at which the masters of the seas kept from the well-known gunnery of the Americans.

Major Armistead, of the artillery, who commanded Fort McHenry, with his comrades there, were a target for British practice, for the fort returned but few shots, when they found that they fell short of the enemy.

Many of the British bombs weighed two hundred and twenty pounds; the uproar of whose reverberations was as terrific as the spectacle of night cannonade was imposing.

After firing these missiles into the fort from six in the morning till three in the afternoon, Cochrane moved some of his vessels nearer, and their shot hailed fire on the defendants.

But in very few moments, as soon as Armistead’s guns reposted within a distance which brought them into contact with their assailants, the latter slipped their cables, hoisted their sails, and fell back beyond the range of our largest guns.

About midnight screened by total darkness and lighted by the flame of their own artillery, a few bomb vessels and rocket boats, with a large squadron of barges, manned by twelve hundred men, pushed up the cove beyond Fort McHenry, to assail it in the rear, effect a landing, and try the city; with loud cheers moving on, and flattering themselves that success awaited their last effort, on which the British admiral confidently relied.

Fatigue, want of rest and comfort, bad weather and exposure, unprotected by good works from the enemy’s fire, without the excitement of returning it, as they were beyond reach of ours, tried the fortitude of the mixed garrison of Fort McHenry.

Three companies of Baltimore artillery, commanded by Captains Berry, Judge Nicholson and Lieutenant Pennington, parts of the thirty-sixth and thirty-eighth regiments of United States infantry, under Lieutenant-Colonel Stuart, with Major Lane, of the fourteenth United States regiment, serving as a volunteer, composed Major Armistead’s force in the fort: of whom the clumsy gunnery of the British shipping killed but four, among whom were two respectable merchants, Lieutenant Claggett and Sergeant Clemm; wounding only twenty.

Two American ship-masters, prisoners on board the frigate Menelaus during the attack, stated, when afterwards liberated, as told to them by British officers, that the attempt was made by eighty boats, carrying each twenty-five men, and defeated with a loss of between four and five hundred.

The several water batteries, not only Fort McHenry but Fort Covington, where Commodore Rodgers was stationed with his sailors, and Lieutenant Newcomb of the navy, and the flotilla men from the city battery, under Lieutenant Webster, as well as that of the Lazaretto, deluged the assailants with such torrents of hot shot, as not merely to repulse, but, with great loss, quickly drive them back to their original anchorage out of reach.

Baltimore, shaken to its foundations by these tremendous explosions, stood firm in spirit: and it was during the striking concussions of that night conflict, that the song of the “Star-spangled Banner” was composed in the admiral’s ship.

Soon after the morning attack on Fort McHenry began, Brooke led his forces within a mile of Baltimore, skillfully followed, however, and judiciously threatened by Winder.

The British commander concentrated his force ostensibly for storming the town that night.

General Smith, perfectly prepared for it, posted Winder and Stricker so advantageously for attacking Brooke next morning, that, together with the night failure on the water fortifications, the British decamped, about midnight, with great precipitation, favored by total darkness, heavy rain, and the exhausted condition of the Americans, who, during the three days and nights’ campaign, had suffered from fatigue, inclement weather and want of rest.

The bomb vessels and barges which passed beyond Fort McHenry, after losing many men and suffering considerable damage, saved from annihilation by the total darkness, retreated to their distant positions, out of reach of shot, whence they kept up the ineffectual bombardment till six o’clock next morning, when they, like the army, drew off, both worsted and convinced of the much greater probability of their own capture or destruction, than that of Baltimore.

After the army had effected its escape, the cannonade of Fort McHenry ceased, at six o’clock, on the morning of the 14th, having continued twenty-four hours.

Completely foiled by water and land, the invaders officially apologized for their retreat, by stating that, as the river did not admit of near approach to the fort, storming the city, without first taking Fort McHenry, might have cost more than it would come to.

British admirals and colonels, therefore, withdrew from that last hostile demonstration of the mistress of the sea in the waters of the Chesapeake, with the sorry consolation of what Admiral Cochrane’s dispatch to Secretary Croker recapitulated as the fruits of the abortion, “the burning of an extensive rope-walk and other public erections, causing their inhabitants to remove their property from the city, above all, the collecting and harassing them around from the surrounding country, producing a total stagnation of their commerce, and heaping upon them considerable expenses, at the same time effectually drawing off their attention and support from other important quarters.”

The Star Spangled Banner Commemorative Silver Dollar Coin shows with an image of Fort McHenry, circa 1861. 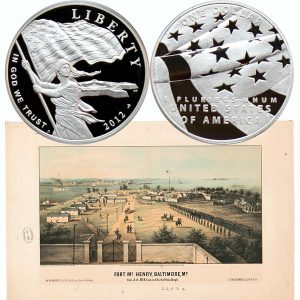