Today, the Edison Commemorative Silver Dollar Coin remembers the patent for the first American motion-picture projection machine by O. B. Brown on August 10, 1869.

From The Wonder Book of Knowledge, The Marvels of Modern Industry and Invention, the Interesting Stories of Common Things, the Mysterious Processes of Nature Simply Explained, compiled and edited by Henry Chase Hill, with the co-operation of experts representing each industry, published in 1917:

The Story of the Motion-Picture Projecting Machine

I shall not make any comparisons nor look up statistics, but will present some facts about an enterprise that, scientifically, industrially and commercially, is one of the great wonders of the world.

It is fair to estimate that more than $375,000,000 is invested in this business in the United States. It looks like an exaggeration or as if the typesetter had slipped in several extra ciphers by mistake, does it not?

The projecting machine is the subject of this story. One sees very little about it in the newspapers and popular magazines, in spite of the fact that it is the keystone, so to speak, of the motion-picture industry.

Of the entire business, in all its ramifications, this machine is the most important not only from a technical standpoint, but as regards both the pleasure and safety of the public.

Here, again, a great deal of money is invested. Its manufacture involves costly and highly specialized machinery, the most intelligent of mechanics and the constant thought and endeavor of the men at the head of the business.

The advancement in the manufacture of motion-picture projecting machines from the start has been along two avenues—to secure better projection, a sharper, clearer and steadier picture, and to eliminate the danger of fire resultant from the ignition of combustible film.

Experts have watched and studied the picture machine through all its stages of development.

For seventeen years they have slowly improved the machine and brought it to its present high state of mechanical perfection.

The development of the fireproof magazine, the automatic fire-shutter, the loop-setter, flame shields and the famous intermittent movement have all been vital factors in the elimination of fire and also in securing perfect projection.

The oldest invention was patented by W. E. Lincoln on April 23, 1867. The contrivance was a mere toy, employing no light and being merely a little machine which, when revolved, gave figures, printed in different positions, the semblance of motion.

The second oldest was of an “optical instrument” patented by O. B. Brown on August 10, 1869. This was really the first American motion-picture projection machine.

There was a sort of disk or moving-shutter movement which, on revolving, gave projected objects the appearance of animation.

Of course, there were no films in those days and the inventor had used translucent glass to obtain the results. Yet here was the germ of our native modern machine.

“A bet was made in 1871 by the late Senator Leland Stanford, of California, that a running horse at no time had all four feet off the ground. Edward Muybridge, an Englishman, by way of experiment, placed numerous cameras at regular intervals about the track, which, by electrical contact, were snapped by the horse in passing. It proved that the horse always had, when running, one foot on the ground. Although this was not the first record of motion pictures, it served to demonstrate their practicability.

“Development had dragged until the Muybridge experiment. In 1880 Muybridge produced, in San Francisco, the ‘Zoopraxiscope,’ which projected pictures (on glass positives) on a screen. Later Muybridge conferred with Edison regarding a combination of his machine with the phonograph, then in its infancy; about 1883 he went abroad and held frequent conferences with M. Marey of the Institute of France.

“Marey first utilized the continuous film, though it was George Eastman who brought it to its present state of high perfection. A great deal of the tremendous present popularity of motion pictures is due to the invention of the translucent film. The early kodak film became the great factor in the cinematograph manufacture.

“In 1893 Lumiere produced the ‘Cinematograph,’ the first machine to project from a film. Edison in 1896 produced his ‘Vitascope.’ These machines became the models of the greatly improved article of today.

“The first real machine was brought to America in 1894. At least, that is as near as I can recollect the date. It was a Lumiere cinematograph and was exhibited at the Union Square Theater, New York City. The French manufacturing firm instructed J. B. Cole & Co. to furnish an operator. The Cole Company was interested in the sale of lanterns and slides and the foreign firm naturally turned to them for assistance.

“They furnished an operator, Edward Hadley. Although he had never seen a motion-picture machine, Hadley was a man who had been in their employ and was naturally familiar with lanterns and electricity. To the best of my belief, Hadley was the first motion-picture operator in America. He afterwards became the operator for Lyman H. Howe, the well-known pioneer traveling motion-picture exhibitor, and later became an exhibitor himself.

Here, for the benefit of the uninitiated, a little description of the film and the projecting head of a machine is necessary.

A motion-picture film is a thin ribbon of transparent pyroxylin plastic or nitrocellulose, which is highly inflammable.

The photographs on the film, one by three-fourths of an inch in size, leave a margin of five thirty-seconds of an inch on each side.

In the margins are the perforations necessary to feed the film through the machine head. There are sixteen pictures to the foot.

The mechanism of the machine head moves the film over an aperture, so that the rays of light from the lamp will project an enlargement of the film picture upon the screen.

The reels upon which the film is wound are mounted above and below— the upper is the feed reel and the lower is the take-up reel.

Sprocket wheels control the action of the film. The top feed sprocket pulls the film from the upper feed reel, the middle intermittent sprocket (below the aperture) turns in a way to give each picture a certain time of stop over the projection aperture, and the bottom take-up sprocket assists in winding the film on the take-up reel.

“The early films were in very short lengths,” continued the manufacturer.

“The average was from twenty to seventy-five feet. A hundred-foot film was considered extra long. They were mostly comic and not educational. The vast possibilities of the film had not yet dawned upon the pioneers. They aimed only to get a laugh with a crude comic picture.

“But those with more foresight realized that the film had come to stay. So the advancement began. Today the public is always looking toward something better. It has been educated up to an exceedingly high standard. The average spectator today can see a defect in an exhibited film as quickly as an expert.

“Machines in the early days were very crude, permitting only short films, which were an endless belt. They were threaded over spools contained in a box at the rear end of the lamp house, passing over the lamp house to the head of the machine; thence down through the head, past the projection aperture and back to the spools. This exposed the film at all times, which was extremely dangerous. About 1900, longer films came into use, which necessitated a change in handling. At the machine head, the film was piled on the floor. This being dangerous and destructive, a receptacle was devised and fastened to the frame below the reel, into which the film passed. This soon gave way to a reel known as the take-up reel, which received the film after it had passed from the upper reel through the head and before the aperture, where it was projected on the screen.

“These are a few steps in the march towards improvement. My first machine was called the ‘Peerlesscope.’ I kept continually improving it, and in 1902 changed the name to “Cameragraph;’ my latest machine, No. 6B, possesses every known device for safety—fire-shutters, which automatically cut off the film from the rays of the lamp while motionless; film-shields, which enclose and protect the film; fire valves, which prevent entrance of flame into magazines; the loop-setter, which prevents breakage of the film while in motion, etc.”

Concerning projection, this manufacturer said: “Pictures cannot succeed without perfect projection, resulting in absolutely clear, flickerless pictures. The longer the period of rest of each picture on the screen, the better the detail and the clearer the picture. This I accomplished by means of an intermittent movement.

“You know that in projecting pictures the motion in the film is not continuous in front of the aperture of the machine head, each picture pausing long enough for proper projection on the screen. Through this intermittent movement I obtain a longer period of rest for each picture, which accomplishes perfect projection of pictures without flicker.

“A very annoying feature until recently has been the losing of the lower film loop, due to poor patching of the film, tearing of the perforations in the films, etc., causing the film to jump the lower sprocket, with the probable tearing and re-adjustment of the film. This I overcame with my loop-setter invention. To explain briefly—

“As the full movement at the upper and lower reel is continuous, while at the aperture it is intermittent, a loop is necessary as a feeder for the take-up or the lower sprocket. If this loop is lost, the film becomes taut, the machine stops and the film may break. The loop-setter instantly readjusts this loop automatically, keeping it always in force.”

The taking of pictures is, of course, one of the interesting phases of the business from a popular standpoint. Here we find not only large sums invested but the action, setting, plots—in fact, the entire order of pulsating life and convincing reality that give to motion pictures their remarkable hold upon the public.

In vying with each other to make the most attractive films possible, the concerns in this end of the industry engage the most talented players, who are transported on long journeys so that the settings may be realistically satisfactory; while often the company includes not only two-footed actors, but horses, one or two clever dogs and sometimes a trained bear and other animals, besides all of which there is usually an array of “properties” that far exceeds in quantity and variety the list of such appurtenances carried by the average stock theatrical company or theater of the ordinary kind.

Then, too, there is the presentation of the pictures, where we find another vast outlay of money in land, buildings and equipment. And, remember, the matter of taking and presenting the pictures must not be considered only from the amusement standpoint. Motion pictures are being employed more and more every day for educational and industrial purposes.

The Edison Commemorative Silver Dollar Coin shows with one of the image pages from O. B. Brown’s patent for an “optical instrument” on August 10, 1869. 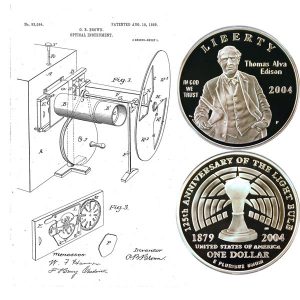