Today, the Half Cent Coin remembers the destruction of Rear-Admiral Cockburn along the Chesapeake including the burning and pillaging of Havre de Grace on May 3, 1813.

The Gentleman’s Magazine of October 1813 included “Interesting Intelligence From The London Gazettes,” with commentary from Cockburn’s reports:

The Admiral states, that being of opinion that a light flotilla of small vessels might be advantageously employed in penetrating the rivers at the head of the Chesapeake; he had directed Rear-admiral Cockburn to take under his orders the Maidstone, Fantome, Mohawk, Highﬂyer, and three prize armed schooners for that purpose.

The Admiral encloses the reports he had received of the operations of the flotilla.

In the first report, dated Elk River, April 29, Rear-adm. Cockburn mentions a successful attempt made by the Fantome and Mohawk, on French Town, at considerable distance up the Elk River, where there was a depot of stores.

The Enemy having been apprized of the visit, were prepared, and made a considerable resistance from a six-gun battery, but were at length compelled to retreat, leaving French Town and its depots to their fate.

The whole of the latter, consisting of much flour, a large quantity of army clothing, saddles, bridles, etc. as well as five vessels near the place, were immediately set fire to, and entirely consumed.

The officers employed in this service were Lieut. G. A. Westphall, of the Marlborough, (who commanded); Capts. Wybourn and Carter, of the Marines, (under whom were 150 of that corps); Lieut. Robertson. of the Artillery; and Lieut. N. Alexander, of the Dragon; all of whom, as well as the men, are highly spoken of by the Rear-admiral.

One seaman, of the Maidstone, wounded in the arm, was the only casualty.

Admiral C. announces it to be his intention to take some cattle from a neighboring farm, giving the owner bills on the Victualling Board, should no resistance be made.

Adm. Cockburn’s second report, dated off Turkey Point, May 3, gives an account of the attack made upon Havre de Grace, at the entrance of the Susquehanna River.

This place had acquired an importance from the American colors being hoisted on a lately-erected battery. The attack was made in two divisions; one under the command of Lieut. Westphal, and the other under Captain Lawrence, of the Fantome.

A warm fire was opened on the place at daylight by Capt. Lawrence’s division, which was smartly returned from the battery for a short time, but which soon slackened; when Captain Lawrence effected a landing with the Marines, the Americans withdrew from the battery, and took shelter in the town.

Lieut. Westphal got possession of the battery, turned the guns against the Enemy, and thereby forced them to retreat with their whole force to the farthest extremity of the town, where they were pursued, and at length forced to take shelter in the woods.

The gallant Lieutenant received a shot through his hand in the pursuit, but notwithstanding succeeded with the other in taking prisoner, and bringing in, a captain of militia; an ensign and a few armed individuals were also taken, but the rest having penetrated the woods, it was not deemed prudent to pursue farther.

And therefore, adds Admiral Cockburn, “after setting fire to some of the houses, to cause the proprietors (who had deserted them, and formed part of the militia who had fled to the woods,) to understand and feel what they were liable to bring upon themselves, by building batteries, and acting towards us with so much useless rancor, l embarked in the boats the guns from the battery, and having also taken and destroyed about one hundred and thirty stand of small arms, I detached a small division of boots up the Susquehanna, to take and destroy whatever they might meet with in it, and proceed myself with the remaining boats, under Captain Lawrence, in search of a cannon foundry, which I had gained intelligence of whilst on shore in Havre, as being situated about three or four miles to the Northward, where we found it accordingly; and getting possession of it without difficulty, commenced instantly its destruction, and that of the guns and other materials we found there, to complete which occupied us during the remainder of the day, as there were several buildings and much complicated heavy machinery attached to it. It was known by the name of the Cecil, or Principio Foundry, and was one of the most valuable works of the kind in America; the destruction of it, therefore, at this moment, will, l trust, prove of much national importance. We have been on shore in the heart of the Enemy’s country, and on his high road between Baltimore and Philadelphia. The boats sent up the Susquehanna destroyed five vessels and a flour store.”

The third report Adm. Cockburn dates from Sassafras River, and in it mentions successful attacks made on Georgetown and Frederickstown.

The inhabitants of these places were informed, that if “they did not attempt resistance, no injury should be done to them or their towns; that vessels and public property only would be destroyed; and that provisions for the use of the squadron should be paid for at their full value.”

On the landing of the boats, however, a fire was opened upon them by 400 militiamen, and five of our seamen wounded.

The militia were soon dispersed, and the villages of Georgetown and Frederickstown were destroyed, with the exception of the houses of such inhabitants as had remained peaceable, and taken no part against us.

Four vessels lying in the river, and some stores of sugar, lumber, and leather, were also destroyed.

The force then re-embarked, and proceeded down the river to another village, not named, where the inhabitants met the Admiral at landing, to say that they had not permitted either guns or militia to be stationed there; and that whilst there, he should meet with no opposition.

The Admiral then entered the town with a small guard, and ascertaining that there was no public property of any kind, or warlike stores, re-embarked.

The Admiral adds, “I also had a deputation from Charlestown, in the Northeast river, to assure me that that place is considered by them at your mercy, and that neither guns or militia-men shall he suffered there: and as I am assured that all the places in the upper part of the Chesapeake have adopted similar resolutions, and there is now neither public property, vessels, nor warlike stores remaining in this neighborhood, I propose returning to you with the light squadron tomorrow morning.”

The Half Cent Coin shows with an artist’s image of Rear-Admiral Cockburn, circa 1819. 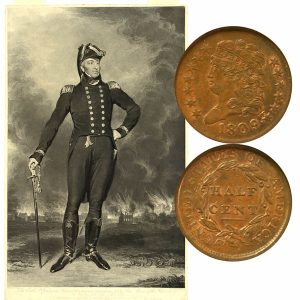