Today, the Bicentennial Half Dollar Coin remembers the opening day of Philadelphia’s Centennial Exhibition 141 years ago.

The day after May 10, 1876, the Reading Eagle newspaper provided details of the opening ceremonies for its readers:

When the sun peeped out from under the clouds yesterday morning in Philadelphia, thousands upon thousands set out for the Centennial grounds.

Reading was well represented. Mayor Evans was with the Philadelphia Councils, Judge Bruckman, George F. Baer, Esq., ex-Sheriff Mishler, Rev. Wallace Radcliffe, Rev. Jacob Fry, Select Councilman McGowan, A. J. Darlington, Superintendent Wootten, and a large number of other gentlemen were recognized by a representative of the Eagle in various sections of the ground.

The number present was so large that it was next to an impossibility to form an estimate as to how many were present. Some put down the number at a half million.

It was a surging mass of men and women who congregated about the central platforms, between the buildings and all over the park. By half past ten o’clock the crowd had centered about the platforms where the opening ceremonies were held.

High up on the roof of Memorial Hall, in the upper transepts of the Main Building, on monuments, cars and platforms, and on every available elevation the multitude took places to see and hear. The sun shone warmly and the sweltering multitude below waited for the appearance of the dignitaries.

Theodore Thomas’ Grand Orchestra furnished music, the chorus of 600 voices was given, and finally the procession appeared on the stand in front of Memorial Hall. Bishop Simpson led the way down to the front, and he offered a lengthy prayer, while the dignitaries stood with heads uncovered.

All eyes seemed to be centered on President Grant, and when he unrolled his manuscript to read his speech, a loud and prolonged applause greeted him. Gen. Hawley made a good speech in turning over the buildings.

The singing of Whittier’s hymn was grand, and the chorus of “Hallelujah,” was inspiring, eloquent and sublime. The great organ pealed forth magnificently. The dignitaries then marched through the Main Building and thence to the Machinery Hall; and when the great engine was set in motion, the flags on the various building were run up, the cannons boomed, the chimes rang and the great Centennial Exposition was formally opened.

The above is a brief outline of the ceremonies of the day. Curiosity was centered upon President Grant and his company. Along the route the procession passed, a strong military guard was stationed to keep back the people. They stood with stretched necks and on tip toe, to catch a glimpse of the General President and his wife.

First came a band, then a detachment of soldiers and finally the President. He was neatly dressed in black. His brown hair was rather long, and his beard was closely trimmed. He had a plain every day, care worn look; more like a farmer than what a foreigner would expect to see in an American President. Gen. Grant’s very plain and domestic appearance was in striking contrast with the gaily bedecked and loudly caparisoned dignitaries from foreign countries. Mrs. Grant was dressed in a pearl colored silk. She appeared very pleasant and agreeable.

Mayors Stokley, of Philadelphia, and Wickham, of New York, followed closely. Gen. Sherman, Gen. Hartranft and other high officials were next. Maj. Grant, of Reading, was on the Governor’s staff.

Then came Russian and Japanese officers, and officials from nearly every clime.

As the presidential party approached Machinery Hall the chimes were ringing the tunes of familiar songs, peculiarly American.

They entered the magnificent building and carried out the remainder of the program. Then there was a grand rush. The signal for the opening of the buildings put everybody in motion, and in a short time the vast edifices were crowded. And thus the Centennial was opened.

It is utterly impossible to gain much of an idea on a day’s visit. The first sights of the colossal buildings as seen from the Reading Railroad cars is simply sublime. No person who has not yet seen them can possibly imagine the vast extent or proportions. Nearing Columbia bridge that crosses the Schuylkill river below Belmont the passenger catches the first glimpses of the buildings to the right.

People of Reading and vicinity who visit the show will find it most convenient to get off at the Centennial station of the Reading road. A small branch leads in off the main line to the right, this side of Columbia bridge. The Reading company has a fine depot there, and an entrance to the park proper is near at hand. Visitors can arrive early in the morning, take their meals on the grounds and return in the evening.

Those who visit the city first reach the grounds by street car, coupe, ambulance or private carriage. The fares are seven cents, twenty-five and fifty cents, and one dollar. Yesterday it appeared as if every vehicle in the city was in full demand. The cars of every line of street railway leading to the grounds were absolutely packed full. Load after load carried the thousands to the grounds. A dozen entrances could not accommodate the great rush early in the day.

The people formed in line before each gate to await their turn to get in the same as at a ballot box. Those who had not a fifty cent note or half dollar in silver were denied admission. Young and old speculators in money did a thriving business. They went up and down the line seeking out those who had not a half dollar. To these they would sell two new half dollar checks for an dollar note, and ten cents as a premium. Rather than get out of the line the people gladly paid it. Going in, the visitor, who is no dead-head, hands his check to a man at a box, who pushes the money down a hole, an arm of a stile turns and clicks, and you enter in. The clicking registers your fare.

Once inside the grounds the visitor who is not acquainted is still more astounded. The various departments have their special buildings. The Park guards and policemen are not yet well acquainted and their answers to inquiries are not always correct as yet. Yesterday the questions asked by the multitude were countless thousands, and those visitors who had most endurance and more absolute raw-boned cheek got along the best.

A bird’s eye view of the opening ceremonies as obtained by an Eagle representative on the stand appears as follows: On the aisles of two immense buildings facing each other were erected large platforms. In the space between was the sweltering multitude.

On one platform were the newspaper men and the dignitaries, and on the other were the musicians, choristers, singers and the great organ, Theodore Thomas stood on a platform in front. He did not used the delicate baton as he does on the stage but he stood there and directed the 600 singers and players with both hands and arms waving the measures in the air. First he had off his high hat, and the sun becoming too warm he put it on again.

Bishop Simpsons’ prayer was voted too lengthy. President Grant’s remarks were most eagerly listened to but were not distinctly heard by many on the platform. The President referred to the purposes of the Centennial and briefly reviewed our national history. He invoked a generous co-operation and then declared the Exhibition open.

The “Hallelujah” chorus that followed was a grand thing and was heard squares away. The procession was formed by the dignitaries who marched through the Main Building and then to Machinery Hall.

An elevated position allowed the careful observer to see a wonderful sight that probably will never be seen on this continent again.

There were dignitaries from all parts of the world. Chinese and Japanese officers in wide flowing white chamois pantaloons, blue coat and military hat all trimmed with gold, marched with the Turk and the Muscovite.

Then came the Russian military officer with the Brazilian Dom; then was the French hussar, with the meek eyed Arabian and Syrian; the Italian with the Egyptian; the American admiral and the Spanish Hidalgo, the Greek, Polander, Swede and Englishmen in full uniform of sashes, gold medals and costly insignias of rank and order; South American men of rank were with the representatives of the New South Wales; Germany and her fiery looking representatives were close by the simple and domestic men of Switzerland.

In fact it appeared like a grand international masquerade, representing a gathering of men of all nations of the world, and as the visitor thought and realized that the people he saw really came from and were men of rank in their distant homes he could not but feel that the assemblage was indeed a most extraordinary one, and one too that is seldom seen more than once in a life time.

The nearest approach that American people have to such an occasion are the inauguration days at Washington, 4th of March.

The procession moved through Machinery Hall to where the great Corliss engine stands. Mr. Corliss was introduced to the President. “Am I to help start this ponderous affair,” remarked the Executive. “Yes, Mr. President, ” replied Mr. Corliss, “that will be done without the least trouble.”

The President laid his hand on the valve arm and wheel, pulled in the direction indicated by Mr. Corliss, and with some slight assistance the monster engine’s beams went slowly up and down, and in a few second ten acres of shafting and pulleys were set in motion.

The President looked up and along the ceiling, and saw the work of the engine. He turned to Mr. Corliss and said, “That is certainly one of the grandest features of the exhibition. I congratulate you.”

The presidential party were then conducted to their carriages, and they drove away from the grounds. As soon as the engine moved, the cannon on Georges’ Hill boomed away, and all the buildings were immediately thronged by the anxious crowd. And thus the great Exposition was thrown open to the public.

The Bicentennial Half Dollar Coin shows with an image of the opening ceremony of the Philadelphia Centennial Exhibition May 10, 1876. 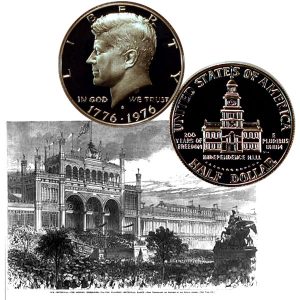