Today is Veterans’ Day and gives all of us the opportunity to say “Thank You” to all of the men and women who have served our country in the armed forces.

Let’s honor our veterans today by taking a look at the set. The package included a slipcover in dark green with U.S. Veterans Commemorative Silver Dollars printed under the heraldic eagle. 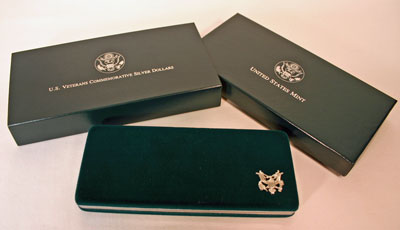 The box inside the sleeve held a dark green velvet covered case with the three commemorative silver dollars side-by-side.

The proof coins from left to right are the Prisoner of War, the Vietnam Veterans and the Women in Military commemorative silver dollars.

The Prisoner of War commemorative silver dollar obverse shows an eagle in flight inside a circle of barbed wire with a broken chain around his left leg.

The reverse of the coin provides a simple view of the National Prisoner of War Museum in Andersonville, Georgia. 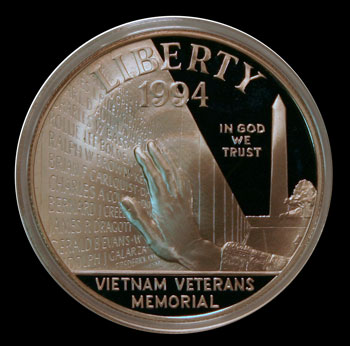 The coin’s reverse shows three different Vietnam War service medals that bestowed honor upon the soldiers who served and were awarded the medals. 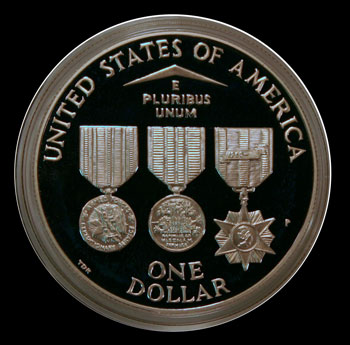 The third coin in the set recognizes the women who have served throughout the years. The commorative silver dollar obverse shows five women with each representing one of the military services listed around the rim of the coin: Army, Marines, Navy, Air Force and Coast Guard. 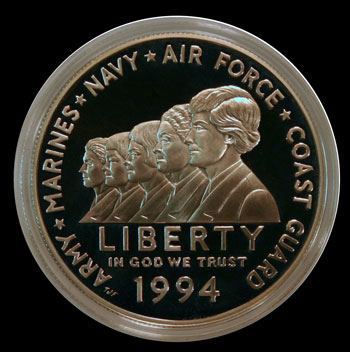 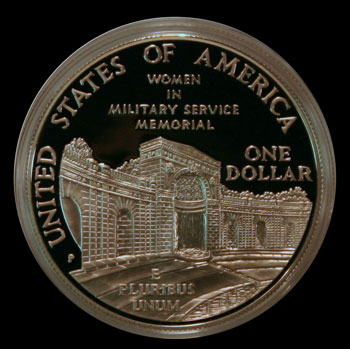 Take a moment to enjoy these coins honoring our veterans and remember each of those proud and brave people who served our country.

And to all of you veterans, thank you for your service to our country and to our fellow Americans. We appreciate you.