Today, the Benjamin Harrison Presidential Dollar Coin remembers when he signed the proclamation for the Pike’s Peak Timber Land Reserve on February 11, 1892.

An excerpt of the proclamation from A Handbook of Politics for 1892  by Hon. Edward McPherson, LL.D., published in 1892:

Whereas, it is provided by Section twenty-four, of the Act of Congress approved March third, Eighteen hundred and ninety-one, entitled “An Act to repeal timber culture laws and for other purposes,” that “The President of the United States may from time to time set apart and reserve, in any State or Territory, having public lands bearing forests, in any part of the public lands wholly or in part covered with timber or undergrowth, whether of commercial value or not, as public reservations; and the President shall, by public proclamation, declare the establishment of such reservations and the limits thereof,”

And whereas, the public lands in the State of Colorado, within the limits hereafter described, are in part covered with timber, and it appears that the public good would be promoted by setting apart and reserving said lands as a public reservation,

Now therefore, I, Benjamin Harrison, President of the United States, by virtue of the power in me vested by Section twenty-four of the aforesaid Act of Congress, do hereby make known and proclaim that there is hereby reserved from entry or settlement and set apart as a Public Reservation, all those certain tracts, pieces or parcels of land lying and being situate in the State of Colorado, and particularly described as follows, to wit:

Excepting from the force and effect of this proclamation all surveyed land which may have been, prior to the date hereof, embraced in any legal entry or covered by any lawful filing duly made in the proper United States Land Office, all un-surveyed lands on which valid settlement has been made under any law of the United States, and all Mining Claims, duly located and held according to the laws of the United States. and rules and regulations not in conflict therewith:

Provided that this exception shall not continue to apply to any particular tract of land unless the entryman, settler or claimant continues to comply with the law under which the entry, filing, settlement or location was made.

Warning is hereby expressly given to all persons not to enter or make settlement upon the tract of land reserved by this proclamation.

In witness whereof, I have hereunto set my hand and caused the seal of the United States to be affixed.

Done at the City of Washington, this 11th day of February in the year of our Lord, one thousand eight hundred and ninety-two, and of the Independence of the United States the one hundred and sixteenth. Benj. Harrison.

An excerpt from an Open Letter titled Our New National Forest Reserves in the Century Magazine of September 1893:

Professor Sargent’s report on the woods and forests of the United States, in the report of the Tenth Census (1880), again called attention to the situation and its needs.

A forestry division was established in the Bureau of Agriculture in 1881, but its only work for twelve years has been collecting data, furnishing statistics, and persistently urging and proving the necessity for the Government’s reserving and systematically managing the fraction of forest lands remaining in its possession.

Since 1882, the Forestry Division has had encouragement and practical aid from the American Forestry Association, which has regularly memorialized Congress, and through its attorneys argued the Government into reserving a part of its forest lands.

The association has membership in thirty-four States, and has been instrumental in the organization of State forestry commissions.

Its publications supplement the able reports of Professor B. E. Fernow, and continue a campaign of education and enlightenment.

The Timber Culture Laws were repealed by act of Congress, March 3, 1891, and a final clause, which the American Forestry Association has the credit of originating and attaching, provided.

Sec. 24. That the President of the United States may, from time to time, set apart and reserve, in any State or Territory having public land bearing forests, any part of the public lands wholly or in part covered with timber or undergrowth, whether of commercial value or not, as public reservations, and the President shall, by public proclamation, declare the establishment of such reservation and the limits thereof.

In accordance with this act, Secretary Noble, after investigation by the General Land Office, made recommendations, and President Harrison issued proclamations, withdrawing from entry or sale these fifteen tracts of forest lands, their combined area, exclusive of the Afognak Reserve in Alaska, amounting to about twenty thousand square miles, or about thirteen million acres.

Actual settlers and miners within the boundaries are not interfered with, but as such reservation prevents any additions to the little communities, these pioneers will naturally be inclined to seek more populous neighborhoods.

While the natural scenery and the wild game are preserved as in a national park, the proper administration and preservation of these protective and economic forests will benefit the adjoining regions, and their treatment upon the best economic principles furnish object-lessons to private owners of forest lands.

The Benjamin Harrison Presidential Dollar Coin shows with a panoramic view of the Pike’s Peak area, circa 1890. 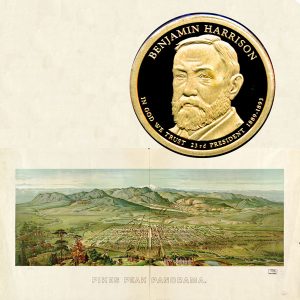