Briefly described in The History of Pennsylvania by Charles Morris published in 1913:

Paine’s “Common Sense “. — Thomas Paine, the son of a Quaker in England, had been induced by Franklin to come to America, where he soon became prominent among the Philadelphia patriots.

A ready and forcible writer, he published on January 8, 1776, a pamphlet called “Common Sense” which had a remarkable effect in inspiring the patriots. The king had just issued a proclamation in which the colonists were denounced as rebels.

Paine ‘s stringent sentences hit the mark admirably in the way of inspiring the patriots to strike for independence.

From the Introduction of Thomas Paine’s pamphlet, “Common Sense,” published in 1776:

Perhaps the sentiments contained in the following pages, are not yet sufficiently fashionable to procure them general favor; a long habit of not thinking a thing wrong, gives it a superficial appearance of being right, and raises at first a formidable outcry in defense of custom.

As a long and violent abuse of power, is generally the Means of calling the right of it in question (and in matters too which might never have been thought of, had not the Sufferers been aggravated into the inquiry) and as the K — of England had undertaken in his own Right, to support the Parliament in what he calls Theirs, and as the good people of this country are grievously oppressed by the combination, they have an undoubted privilege to inquire into the pretensions of both, and equally to reject the usurpation of either.

In the following sheets, the author hath studiously avoided everything which is personal among ourselves.

Compliments as well as censure to individuals make no part thereof.

The wife, and the worthy, need not the triumph of a pamphlet; and those whose sentiments are injudicious, or unfriendly, will cease of themselves unless too much pains are bestowed upon their conversion.

Many circumstances hath, and will arise, which are not local, but universal, and through which the principles of all Lovers of Mankind are affected, and in the Event of which, their Affections are interested.

The laying a Country desolate with Fire and Sword, declaring War against the natural rights of all Mankind, and extirpating the Defenders thereof from the Face of the Earth, is the Concern of every Man to whom Nature hath given the Power of feeling; of which Class, regardless of Party Censure, is the AUTHOR.

P.S. The Publication of this new Edition hath been delayed, with a View of taking notice (had it been necessary) of any Attempt to refute the Doctrine of Independence:

As no Answer hath yet appeared, it is now presumed that none will, the Time needful for getting such a Performance ready for the Public being considerably past.

Who the Author of this Production is, is wholly unnecessary to the Public, as the Object for Attention is the Doctrine itself, not the Man. Yet it may not be unnecessary to say, That he is unconnected with any Party, and under no sort of Influence public or private, but the influence of reason and principle.

The beginning of his “Common Sense:”

Of the Origin and Design of Government in General. With concise Remarks on the English Constitution.

Some writers have so confounded society with government, as to leave little or no distinction between them; whereas they are not only different, but have different origins.

Society is produced by our wants, and government by our wickedness; the former promotes our happiness positively by uniting our affections, the latter negatively by restraining our vices.

The one encourages intercourse, the other creates distinctions.

The first is a patron, the last a punisher.

Society in every state is a blessing, but government even in its best state is but a necessary evil; in its worst state an intolerable one; for when we suffer, or are exposed to the same miseries by a government, which we might expect in a country without government, our calamities is heightened by reflecting that we furnish the means by which we suffer.

Government, like dress, is the badge of lost innocence; the palaces of kings are built on the ruins of the bowers of paradise.

For were the impulses of conscience clear, uniform, and irresistibly obeyed, man would need no other lawgiver; but that not being the case, he finds it necessary to surrender up a part of his property to furnish means for the protection of the rest; and this he is induced to do by the same prudence which in every other case advises him out of two evils to choose the least.

Wherefore, security being the true design and end of government, it unanswerably follows that whatever form thereof appears most likely to ensure it to us, with the least expense and greatest benefit, is preferable to all others. 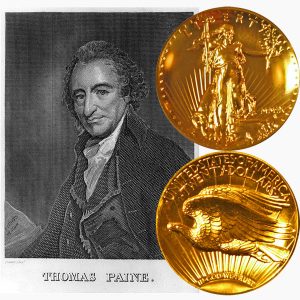