Today, the Library of Congress Commemorative Bimetallic Ten-Dollar Coin remembers the convention held in Chicago on August 1, 1893 to discuss the money standards of gold and silver.

From the San Francisco Morning Call newspaper of the following day:

Out of the West.

The National Convention of the American Bimetallic League met at 10 o’clock this morning in the First Methodist Church auditorium. It was the largest assembly of a like character in the history of financial agitation.

The features of many scarred veterans of financial agitation were visible in the heterogeneous assembly. General A. J. Warner of Ohio, president of the Bimetallic League; Congressman Bartine of Nevada, Congressman W. J. Bryan of Nebraska, Governor Waite of Colorado, Senator Stewart of Nevada, Senators Mantel of Montana, Shoup of Idaho and T. M. Patterson of Colorado, Governor Kolb, Populist leader of Alabama; Editor Goodwin of Salt Lake, Herman J. Taubeneck of the executive committee of the People’s party and Senator Dubois of Idaho were conspicuous among these.

When Chairman Warner of the Bimetallic League called the convention to order many of the delegates were obliged to stand in the aisle on account of the smallness of the hall.

Chairman Warner opened the proceedings by introducing Mayor Carter H. Harrison of Chicago, who welcomed the delegates to the city.

“I welcome you warmly,” said Mayor Harrison, “because I believe you have the good of the country at heart. Some of you may be rather wild; it is said that you are silver lunatics. I look down upon you and am rather glad to welcome such lunatics. It is the crazy men that march the world forward and make progress a possibility. They say that though you believe in bimetallism you are crazy. If the action of 1873 should be blotted from the annals of American political action I believe that silver would be worth 129 cents an ounce. Be wise in your deliberations, but be fearless. Congress is about to meet. Give the benefit of your deliberations to Congress, and tell Grover Cleveland what the people of the United States want.”

Hon. Thomas M. Patterson, chairman of the Colorado delegation, responded to the Mayor, and Chairman Warner of the Bimetallic League then delivered his opening address.

“The most extraordinary condition of affairs,” said he, “meets the assembling of this convention. The earth is yielding her fruits in unusual abundance and rich harvests are being gathered under favoring skies; yet never before in the history of the country has there been such widespread fear and distress, never before such loss of confidence and destruction to credit. The industries are everywhere breaking down and laborers by tens of thousands are thrown idle on the streets with want staring them in the face. Scores of banks are driven to suspension. There has been a shrinkage of hundreds of millions in the value of stocks and other property. To attribute this condition to the silver purchasing law is absurd. Under this law since 1890 $150,000,000 has been added to our currency. Does anybody believe that the presence of this $150,000,000 makes money scarce and dear? The real object lesson of the situation is very different from that which the gold conspirators intend. It enables us to see the beginning of the shrinkage in prices that must take place in order to go to a purely gold basis. The trouble is in the change of the money standard. The value of money may be doubled either by doubling the weights of standard coins or by destroying half of the metal out of which the coins are made. The establishment of a single gold standard is equivalent to putting the value of $2 into $1. It is doubling the unit and putting property down one-half. This is  what is going on. To do this and still require the same number of dollars in the payment of debts and taxes is to sanction he spoliation of one class by the other.”

He characterized the silver act of 1873 as a crime, and said he was willing to have the acts of 1890 repealed if the other Sherman law, the act of 1873, can be repealed by the same bill. Let both Sherman laws go together and place the country back upon the constitution and the law as it stood before 1873.

The Library of Congress Commemorative Bimetallic Ten-Dollar Coin shows with an image of General A. J. Warner from his military days. 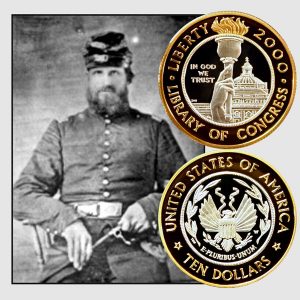