Today, the Library of Congress Bi-Metallic Ten-Dollar Coin remembers the actions of the Continental Congress of 241 years ago.

From today’s online Library of Congress and their Century of Lawmaking database, let’s look at the notes from the Continental Congress in session at Carpenter’s Hall in Philadelphia on October 20, 1774:

To obtain redress of these grievances, which threaten destruction to the lives, liberty, and property of his majesty’s subjects, in North America, we are of opinion, that a non-importation, non-consumption, and non-exportation agreement, faithfully adhered to, will prove the most speedy, effectual, and peaceable measure: and, therefore, we do, for ourselves, and the inhabitants of the several colonies, whom we represent, firmly agree and associate, under the sacred ties of virtue, honour and love of our country, as follows:

1. That from and after the first day of December next, we will not import, into British America, from Great-Britain or Ireland, any goods, wares, or merchandise whatsoever, or from any other place, any such goods, wares, or merchandise, as shall have been exported from Great-Britain or Ireland; nor will we, after that day, import any East-India tea from any part of the world; nor any molasses, syrups, paneles, coffee, or pimento, from the British plantations or from Dominica; nor wines from Madeira, or the Western Islands; nor foreign indigo.

2. We will neither import nor purchase, any slave imported after the first day of December next; after which time, we will wholly discontinue the slave trade, and will neither be concerned in it ourselves, nor will we hire our vessels, nor sell our commodities or manufactures to those who are concerned in it.

3. As a non-consumption agreement, strictly adhered to, will be an effectual security for the observation of the non-importation, we, as above, solemnly agree and associate, that, from this day, we will not purchase or use any tea, imported on account of the East-India company, or any on which a duty hath been or shall be paid; and from and after the first day of March next, we will not purchase or use any East-India tea whatever; nor will we, nor shall any person for or under us, purchase or use any of those goods, wares, or merchandise, we have agreed not to import, which we shall know, or have cause to suspect, were imported after the first day of December, except such as come under the rules and directions of the tenth article hereafter mentioned.

4. The earnest desire we have, not to injure our fellow-subjects in Great-Britain, Ireland, or the West-Indies, induces us to suspend a non-exportation, until the tenth day of September, 1775; at which time, if the said acts and parts of acts of the British parliament hereinafter mentioned are not repealed, we will not, directly or indirectly, export any merchandise or commodity whatsoever to Great-Britain, Ireland, or the West-Indies, except rice to Europe.

5. Such as are merchants, and use the British and Irish trade, will give orders, as soon as possible, to their factors, agents and correspondents, in Great-Britain and Ireland, not to ship any goods to them, on any pretence whatsoever, as they cannot be received in America; and if any merchant, residing in Great-Britain or Ireland, shall directly or indirectly ship any goods, wares or merchandise, for America, in order to break the said non-importation agreement, or in any manner contravene the same, on such unworthy conduct being well attested, it ought to be made public; and, on the same being so done, we will not, from thenceforth, have any commercial connexion with such merchant.

6. That such as are owners of vessels will give positive orders to their captains, or masters, not to receive on board their vessels any goods prohibited by the said non-importation agreement, on pain of immediate dismission from their service.

7. We will use our utmost endeavours to improve the breed of sheep, and increase their number to the greatest extent; and to that end, we will kill them as seldom as may be, especially those of the most profitable kind; nor will we export any to the West-Indies or elsewhere; and those of us, who are or may become overstocked with, or can conveniently spare any sheep, will dispose of them to our neighbours, especially to the poorer sort, on moderate terms.

8. We will, in our several stations, encourage frugality, economy, and industry, and promote agriculture, arts and the manufactures of this country, especially that of wool; and will discountenance and discourage every species of extravagance and dissipation, especially all horse-racing, and all kinds of gaming, cock-fighting, exhibitions of shews, plays, and other expensive diversions and entertainments; and on the death of any relation or friend, none of us, or any of our families, will go into any further mourning-dress, than a black crape or ribbon on the arm or hat, for gentlemen, and a black ribbon and necklace for ladies, and we will discontinue the giving of gloves and scarves at funerals.

9. Such as are venders of goods or merchandise will not take advantage of the scarcity of goods, that may be occasioned by this association, but will sell the same at the rates we have been respectively accustomed to do, for twelve months last past.–And if any vender of goods or merchandise shall sell any such goods on higher terms, or shall, in any manner, or by any device whatsoever violate or depart from this agreement, no person ought, nor will any of us deal with any such person, or his or her factor or agent, at any time thereafter, for any commodity whatever.

10. In case any merchant, trader, or other person, shall import any goods or merchandise, after the first day of December, and before the first day of February next, the same ought forthwith, at the election of the owner, to be either re-shipped or delivered up to the committee of the county or town, wherein they shall be imported, to be stored at the risque of the importer, until the non-importation agreement shall cease, or be sold under the direction of the committee aforesaid; and in the last-mentioned case, the owner or owners of such goods shall be reimbursed out of the sales, the first cost and charges, the profit, if any, to be applied towards relieving and employing such poor inhabitants of the town of Boston, as are immediate sufferers by the Boston port-bill; and a particular account of all goods so returned, stored, or sold, to be inserted in the public papers; and if any goods or merchandises shall be imported after the said first day of February, the same ought forthwith to be sent back again, without breaking any of the packages thereof.

11. That a committee be chosen in every county, city, and town, by those who are qualified to vote for representatives in the legislature, whose business it shall be attentively to observe the conduct of all persons touching this association; and when it shall be made to appear, to the satisfaction of a majority of any such committee, that any person within the limits of their appointment has violated this association, that such majority do forthwith cause the truth of the case to be published in the gazette; to the end, that all such foes to the rights of British-America may be publicly known, and universally contemned as the enemies of American liberty; and thenceforth we respectively will break off all dealings with him or her.

12. That the committee of correspondence, in the respective colonies, do frequently inspect the entries of their custom-houses, and inform each other, from time to time, of the true state thereof, and of every other material circumstance that may occur relative to this association.

13. That all manufactures of this country be sold at reasonable prices, so that no undue advantage be taken of a future scarcity of goods.

14. And we do further agree and resolve, that we will have no trade, commerce, dealings or intercourse whatsoever, with any colony or province, in North-America, which shall not accede to, or which shall hereafter violate this association, but will hold them as unworthy of the rights of freemen, and as inimical to the liberties of their country.

And we do solemnly bind ourselves and our constituents, under the ties aforesaid, to adhere to this association, until such parts of the several acts of parliament passed since the close of the last war … are repealed.

And we recommend it to the provincial conventions, and to the committees in the respective colonies, to establish such farther regulations as they may think proper, for carrying into execution this association.

The foregoing association being determined upon by the Congress, was ordered to be subscribed by the several members thereof; and thereupon, we have hereunto set our respective names accordingly.

The Library of Congress Bi-Metallic Ten-Dollar Coin shows beside a portrait of Peyton Randolph, the first and third president of the Continental Congress. 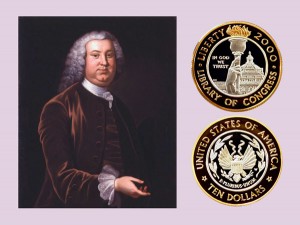