The First Flight Commemorative Gold Ten-Dollar Coin remembers the first occurrence of airmail in the United States on September 23, 1911.

From the morning edition of The Daily Missoulian, September 24, 1911, out of Missoula, Montana:

New York, Sept. 23.—The first United States mail ever transported by aeroplane was carried today from the aviation field on Nassau boulevard, Long Island, to Garden City, a distance of five miles, by Earl L. Ovington, in a Bleriot machine.

His flight was the leading feature of the international meet’s opening day.

Ovington took only one bag of mail, held it between his knees, and when he was over Garden City he dropped it on the signal of a man who waved a flag, as prearranged.

This bag contained about 75 pounds of letters and postcards.

The flying contests were mediocre, the most Interesting being the search by aviators for a detachment of the Eighteenth Infantry, United States army, which had been secreted in a wood three miles southeast of the field.

Six of the aviators, including Tom Sopwith and Grahame-White of England, Eugene Ely, J. A. D. McCurdy and Beatty, could not find the soldiers.

Eugene Ely made a spectacular flight, showing the perfect control of his machine. He dazzled the crowds by turning his machine head-down and dropped 300 feet and then checking his flight when near the turf, and floating off.

Miss Matilda Moisant was the only woman to make a flight in the 24 mile breeze which prevailed. She circled the course several times in a monoplane and made a safe landing.

Dr. Henry Walden, who already has had several falls, had a bad spill when he tried to cut under Lee Hammond’s machine in the finish of the cross country flight.

Walden ventured too close to the turf, the tail of his monoplane struck and it turned a somersault. Walden leaped and although he sustained a severe shock, he saved himself from serious injury.

More details were listed in the New York Sun newspaper of September 24, 1911:

An aviator carried the United States mail yesterday for the first time in America. It was at the International Aviation Meet, sanctioned by the Aero Club, which opened at the Nassau aviation field in the afternoon with thirty-seven aviators entered for the races, four of them being women.

There are many experiments for this international aero meet which are expected to markup new records in American aviation. Some of these were started off yesterday afternoon.

The mails travelled in the air under the sanction of the Government. Soldiers were spied upon by aviators in an effort to determine the utility of aeroplanes in actual warfare as scouts.

Toy balloons were sent up and caught by aerial scouts.

And passengers went aloft in aeroplane races, not new, to be sure, in American aviation, but nevertheless interesting to the crowds that gathered on the Long Island plains yesterday.

Earle L. Ovington has the distinction of being the first aviator to carry United States mail.

Ovington loaded himself up with a sack of mall and carried it to Mineola. He dropped it in front of the Mineola post office.

Postmaster William McCarthy was waiting for it, ducked when it fell, then grabbed it and took it indoors, where it underwent from then on the usual postal process.

Ovington turned in a wide circle and went back to the field, where the crowd clapped him as the first airline postman.

They have done this sort of thing in England recently, but Ovington’s exploit starts whatever list of aerial mail carrying may be made from now on.

The management of the meet set up on the field at Nassau a post office which did a big business all day yesterday.

There were letters addressed to the principal aero clubs of Europe and they all bore indications of having been in the first mail pouch carried regularly as a part of the United States postal service.

The post office was arranged for under special action by Postmaster-General Hitchcock. He will be on hand at the meet on Monday to see how aeroplanes work as mail carriers.

The First Flight Commemorative Gold Ten-Dollar Coin shows with an image of Pilot Ovington and his wife in front of his airplane, circa 1911. 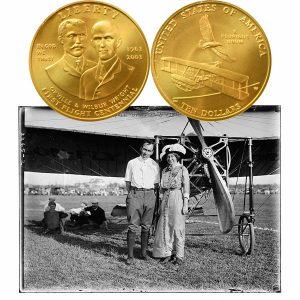