Today, the Washington Commemorative Silver Half Dollar Coin remembers when the Commander moved his troops to Middlebrook on May 28, 1777.

From The Battle of Bound Brook, An Address Delivered Before the Washington Campground Association by Titus Elwood Davis, published in 1895:

The surprise at Bound Brook caused much anxiety to Washington. It showed that it was a post of great importance and also of great danger.

It was the intention of the Commander-in-chief to construct strong fortifications at Bound Brook, and to station a large part of the American Army there.

But General Greene having made a careful survey of the field, and noting its exposure on all sides to attacks from the enemy, which might be attended with more disastrous results than the first defeat, it was deemed unwise to carry such plans into effect.

On the 28th of May in the same year Washington came to his encampment on the Middlebrook and the troops were withdrawn from Bound Brook.

American Camp on the Middlebrook.

Bound Brook again occupied an important place in the War of the Revolution when Washington, with the main body of the American forces, encamped on the elevation of ground overlooking the village of Bound Brook, and only a mile distant.

Here an excellent view of the valley of the Raritan could be obtained, and from the true “Washington Rock” on the summit of the hill, all the movements of the enemy at New Brunswick could be seen.

The American Army came from Morristown May 28, 1777, and pitched their tents on the Middlebrook.

The entire Army numbered 8,398, including cavalry, artillery and infantry. Of these, 2,660 were sick or disabled, so the real strength of the Army was only 5,738 men.

The first encampment was on the west branch of the Middlebrook, in what is called Washington Valley, between the first and second range of mountains.

Three forts guarded this valley from any rear attack by the enemy. One of these forts, still carefully preserved, may be seen on the farm and near the home of Mr. Kennedy Bolmer.

Washington remained with his Army in this valley only seventeen days, moving on June 14th to the south side of the mountain, where he took up a very strong position on the elevated ground in full view of the British.

It was his intention to make a strong line of fortifications here, but on June 30 Lord Howe with the British Army retreated from New Jersey to Staten Island, and two days after, on July 2, Washington moved his Army to Pompton Plains.

During this entire encampment, as we learn from a letter written to his brother John, the American Commander occupied a tent in the midst of his Army.

This first encampment therefore lasted thirty-five days, from May 28 to July 2, 1777.

The letter to his brother from The Writings of George Washington from the Original Manuscript Sources, 1745-1799, Volume 8, by George Washington, John Clement Fitzpatrick, David Maydole Matteson, published in 1933:

Whether it is owing to your not writing to me, or to the miscarriage of Letters, I cannot undertake to say; but certain it is, I have not received a Letter from you for some considerable time.

Finding Genl. Howe was Assembling his whole Force (excepting the necessary Garrisons for New York &ca.) at Brunswick, in this State, I began to collect mine at this place; (a strong piece of ground) ten Miles distant from him, where I have now been (in my Tent) about 5 Weeks.

On the Night of the 13th, He Marched out of Brunswick, and advanced the head of his Column to Somerset Court House, Nine Miles, whilst the Rear Remained at Middlebush about 4. In this Situation he lay till the 19th; his left Wing covered by Brunswick; his Right by the River Millstone, and his Front by the Rariton, perfectly secure from any attempt of ours, if we had been, in other respects, ripe for an Attack.

Our conjectures of this move were two, either that it was designed immediately to Philadelphia, or, which was much the most probable, against this Army; as it was not to be conceived that Genl. Howe would be rash enough to proceed across the Country with one Army in Front, whilst this, under my Commd. was so situated as to fall, at any time upon his Flank and rear, without making an attempt to defeat and disperse it.

Be the real design which it would, certain it is, a disappointment, and much chagrin followed; for on the Night of the 19th: a sudden retreat was made back to Brunswick, burning and destroying Houses &ca. as they went; this Retreat, I am persuaded, was the effect of despair at finding the Militia of this, and the State of Pennsylvania turning out to oppose them; whilst they would have part of my force (if they had attempted to cross the Delae.) to oppose them in Front, at the passage of the River, whilst I should be laying at them behind; and to attack my Troops, Situated as I am, they found impracticable, without great loss, and a probable defeat.

On Sunday the 22d. they retired from Brunswick to Amboy; but having intimation of the design the Evening before, I detached three Brigades to fall upon their Rear, from whom, I believe, they received a pretty good peppering.

Some Accts. make their loss in killed and Wounded near 500, but the truth of this I do not undertake to vouch for, as they are equal to Indians in concealing their loss, by a removal of their dead, and were they to take up the business of Scalping they would much resemble Savages, in every respects! so much is the boasted generosity, and glory of Britains fallen!

So soon as they got to Amboy they began to Transport their Baggage and Stores as fast as possible to Staten Island, and having divested themselves of all encumbrance of this kind, they moved out their whole force on Thursday last, and advanced rapidly, towards us.

What was the design of this New Maneuver I know not, whether to attempt our strength on the left as they had before on our Right. Whether to cut off the light Troops which I had advanced towards their lines. Whether, finding themselves a little disgraced by their former move, they wanted to flourish off a little at quitting the Jerseys, or, whether by this sudden eruption they meant to possess themselves of as much fresh Provision as they could, plunder the Inhabitants; and spread desolation; as I have said before, I know not; but certain it is they have left nothing which they could carry off, Robbing, Plundering, and burning Houses as they Went.

We followed them with light Troops to their Works at Amboy, but could not prevent the Desolation they committed.

I expect from appearances and my Intelligence, they will be embarked in a few hours for Staten Island, or New York; for what other Expedition time, not I, can discover. By means of their Shipping and the easy transportation that Shipping affords, they have it much in their power to lead us a very disagreeable dance.

My best wishes attends my Sister and all the rest of the Family and with every Sentimt. of regd. &c.

The Washington Commemorative Silver Half Dollar Coin shows with a map of the area, circa 1781. 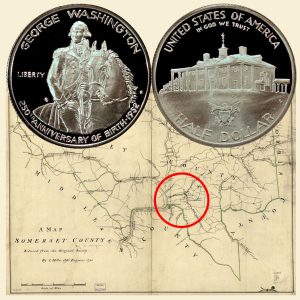