Today, the Morgan Silver Dollar Coin remembers the law that demonetized the trade dollar with the United States borders.

First, back in 1873, Congress introduced the law to manufacture trade dollars, which was slightly larger than the previous silver dollars.

The trade dollar’s main function was to compete with other nations’ silver coin with foreign trade, primarily with the Orient.

However, the price for silver dropped and Congress introduced the bill to demonetize the trade dollar within the United States. They feared people would buy the trade dollars at a reduced rate then use them as currency.

Though the trade dollar was produced from 1873 through 1885, after 1876, they were no longer valid as currency within the states.

The demonetization law passed as a joint resolution 139 years ago.

From the United States Statutes At Large:

[No. 17.] Joint resolution for the issue of silver coin.

Resolved by the Senate and House of Representatives of the United States of America in Congress assembled, That the Secretary of the Treasury, under such limits and regulations as will best secure a just and fair distribution of the same through the country, may issue the silver coin at any time in the Treasury to an amount not exceeding ten million dollars, in exchange for an equal amount of legal-tender notes; and the notes so received in exchange shall be kept as a special fund separate and apart from all other money in the Treasury, and be reissued only upon the retirement and destruction of a like sum of fractional currency received at the Treasury in payment of dues to the United States; and said fractional currency, when so substituted, shall be destroyed and held as part of the sinking fund, as provided in the act approved April seventeen, eighteen hundred and seventy-six.

SEC. 2. That the trade dollar shall not hereafter be a legal tender, and the Secretary of the Treasury is hereby authorized to limit from time to time, the coinage thereof to such an amount as he may deem sufficient to meet the export demand for the same.

SEC. 3. That in addition to the amount of subsidiary silver coin authorized by law to be issued in redemption of the fractional currency it shall be lawful to manufacture at the several mints, and issue through the Treasury and its several offices, such coin, to an amount, that, including the amount of subsidiary silver coin and of fractional currency outstanding, shall, in the aggregate, not exceed, at any time, fifty million dollars.

SEC. 4. That the silver bullion required for the purposes of this resolution shall be purchased, from time to time, at market-rate, by the Secretary of the Treasury, with any money in the Treasury not otherwise appropriated; but no purchase of bullion shall be made under this resolution when the market-rate for the same shall be such as will not admit of the coinage and issue, as herein provided, without loss to the Treasury; and any gain or seigniorage arising from this coinage shall be accounted for and paid into the Treasury, as provided under existing laws relative to the subsidiary coinage : Provided, That the amount of money at any one time invested in such silver bullion, exclusive of such resulting coin, shall not exceed two hundred thousand dollars.

The Morgan Silver Dollar Coin shows against an image taken from a tobacco box circa 1860-1870. 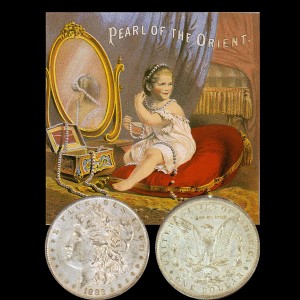