Recently I saw a video of an intricately choreographed Christmas lights display at a home. The owner, a musical director, built multiple displays and synchronized them to a variety of Star Wars music — including a light saber battle on the roof.

But, when were the first electrical Christmas lights displayed?

Back in December 1882, one of Thomas Edison’s colleagues lived in the city with the first square mile to have electricity to the homes—New York.

Oddly, the New York papers of the day did not make a big deal of the tree with electric lights, however a reporter from Detroit wrote a story for his newspaper, the Detroit Post and Tribune.

“Last evening I walked over beyond Fifth Avenue and called at the residence of Edward H. Johnson, vice president of Edison’s electric company. There at the rear of the beautiful parlors, was a large Christmas tree representing a most picturesque and uncanny aspect. It was brilliantly lighted with many colored globes about as large as an English walnut and was turning some six times a minute on a little pine box.

“There were 80 lights in all encased in these dainty glass eggs, and about equally divided between white, red and blue. As the tree turned, the colors alternated, all the lamps going out and being relit at every revolution. the rest was a continuous twinkling of dancing colors, red, white, blue, white, red, blue —all evening. It was a superb exhibition.”

From the hand-blown bulbs to the hand-wired string of lights, several craftsmen built those first lights for Mr. Johnson. That made the early process of electrically lighting a Christmas tree cost the equivalent of several thousands of dollars.

Early on, “wiremen” (electricians) had to hand-wire each bulb into a string then wire the string into an overhead light fixture for the electricity. This time-consuming process, in addition to the cost of the bulbs and wire, made the Christmas lights too expensive for the masses.

In the 1890s, General Electric began mass production of miniature bulbs and worked toward building ready-made strings of lights.

In 1895, President Grover Cleveland asked General Electric to make lights for the White House Christmas tree. This started an interest, at least among those who could afford it, in Christmas lights and parties to show off their trees.

By 1901, the Christmas lights advertisements touted the benefits of the electrical bulbs and the dangers of candle-lit trees.

By 1903, the industry produced more affordable strings of lights.

And by the 1920s, with most homes now wired for electricity and the strings of Christmas lights more affordable, many people enjoyed the beauty of colorful lights on their Christmas trees.

The rest of us just enjoy. 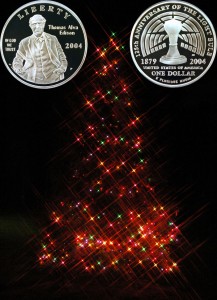