Back in the country’s youth, the Founding Fathers debated and discussed the public spaces for the “Federal City.”

In 1796, George Washington wrote, “Conceiving, if there be space sufficient to afford it, that a botanical garden would be a good appendage to the institution of a university, part of this square might be applied to that purpose. If inadequate, and the square, designated in the plan of Major L’Enfant for a marine hospital, is susceptible of that institution and a botanical garden also, ground there might be appropriated to this use. If neither will admit of it, I see no solid objection against commencing this work within the President’s square, it being previously understood, that it is not to be occupied for this purpose beyond a certain period; or until circumstances would enable or induce the public to improve it into pleasure walks.”

At one point, James Madison and Thomas Jefferson toured several of the young country’s states noting the various agricultural and botanical specimens.

In 1820, the dreams of Washington, Jefferson and Madison began to approach reality when President James Monroe signed, “An act for the benefit of the Columbian Institute, established for the promotion of arts and sciences in the city of Washington.”

Over many years, the botanic specimens in the gardens grew in number. In one of the largest contributions, the U.S. Ex. Ex. commanded by Charles Wilkes brought back more than 10,000 plants in 1842 from the lands in the South Seas.

In 1931, construction began on the Botanic Garden’s new buildings for the location that remains its home today.

However, in the 1970s, work crews discovered the aluminum superstructure was deteriorating.

For the next few years, repairs kept the structure safe.

In the late 1980s, they decided maintenance could no longer save the building – a whole new structure was necessary.

In 1992, with its roof declared unstable, crews dismantled the Palm House. The plants, some historically irreplaceable, were shipped to Florida for temporary safekeeping.

Begun in 1820, the Botanic Garden constantly operated and was open to the public starting in 1850.

The long open streak ended on September 1, 1997. At 5 pm, the US Botanic Garden Conservatory closed to the public for extensive renovation and reconstruction.

When it reopened in 2001, the new architecture preserved many of the historic elements of the old buildings such as the glass rooflines; however, the newly renovated spaces were state-of-the-art, especially the environmental systems.

The 1997 Botanic Garden Commemorative Silver Dollar Coin recognized the 175th anniversary of the living history of the gardens. 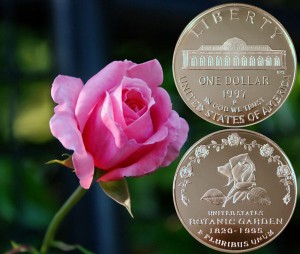