Sixty-seven years ago, cold, tired and homesick men stormed the shores of Normandy in what would become a turning point of World War II.

Though many men lost their lives that day and many others have passed away in the ensuing years, we must remember their courage and their perseverance.

The World War II commemorative silver dollar reminds us of the struggles of the soldiers that fateful day.

On the obverse, a soldier carries a rifle and hunches under his backpack trying to evade enemy fire as runs up the Normandy beach. In the background, boats bring additional troops to shore. Just below the soldier’s knee, the helmeted face of another soldier can be seen in the surf. Has he been mortally wounded as many were that day? Or, is he struggling to rise out of the waves and run up the sand with his brother-in-arms into the warfare?

The reverse of the commemorative silver dollar shows the shoulder sleeve insignia of the Supreme Headquarters Allied Expeditionary Force. Below the emblem is an excerpted quote from the Supreme Allied Commander, General Dwight D. Eisenhower, from that day. 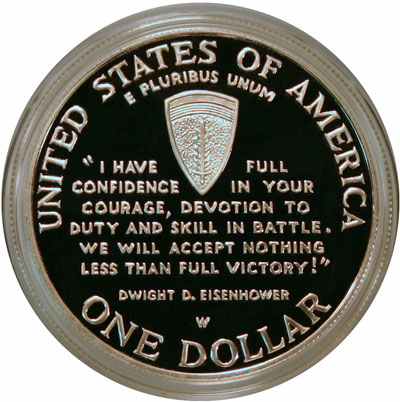 The full quote can be found on the National World War II Memorial in Washington, DC.

“You are about to embark upon the great crusade, toward which we have striven these many months. The eyes of the world are upon you… I have full confidence in your courage, devotion to duty and skill in battle. We will accept nothing less than full victory.”

But, General Eisenhower wrote an interesting note the day before what would become D-Day. Initially planned for June 5, 1944, Operation Overlord was delayed due to the weather. The forecast for June 6 was not much better, but General Eisenhower decided the troops should proceed.

Much later after D-Day, a note he prepared on June 5 was found in the General’s shirt pocket:

“Our landings in the Cherbourg-Havre area have failed to gain a satisfactory foothold and I have withdrawn the troops. My decision to attack at this time and place was based upon the best information available. The troops, the air, and the Navy did all that bravery and devotion to duty could do. If any blame or fault attaches to the attempt it is mine alone – June 5, 1944”

True leaders know that successes are attributed to the people under them; in this case the troops, but any failures are the responsibility of the leader. Before ever making the tough decision and before ever knowing the outcome, General Eisenhower exhibited his leadership skills in his willingness to take full responsibility for any failure.

In papers written after D-Day, General Eisenhower wrote of the troops, “The soldiers, sailors, and airmen are indescribable in their élan, courage, determination and fortitude. They inspire me.”

Most of these brave men to whom he refers are gone, but we must remember that their courage and their perseverance wrote an important part of our history and provided the basis of our continued freedoms today.