At the end of September, we posted the first portion of the USPS Submarine Stamp booklet. Today’s post continues with a few more pages.

The next page in the booklet moves forward in time to the submarines in World War I.

Our early submarines quickly improved, growing longer, more capable, and – with new diesel engines for surface use – safer. The older boats were largely relegated to guarding harbors, mostly in the Philippines. The newer, longer-range boats were used in both oceans. During World War I the German Unterseeboot, or U-boat, proved that the submarine could be a devastating weapon. Small and dangerous to serve in, U-boats made fierce attacks on merchant ships and warships, and almost cut Britain’s maritime lifeline. A U-boat sank the British passenger liner RMS Lusitania in 1915. The loss of civilian lives, some of them American, helped push us into the Great War two years later. By then our Navy had some 50 subs, including 153-foot K-boats and 165-foot L-boats. During and after the war we continued to develop sub classes on up the alphabet (except for P, Q, and – obviously – U) to V. The V-class submarines were designed to be “fleet boats” – able to speed on the surface at some 20 knots, and so keep up with a fleet. In World War II at least 33 surviving S-boats made war patrols, and on old veteran, S-44, even sank a Japanese cruiser. 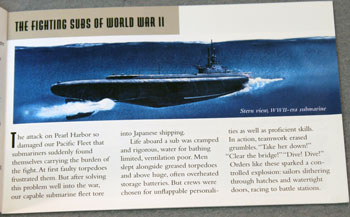 The attack on Pearl Harbor so damaged our Pacific Fleet that submariners suddenly found themselves carrying the burden of the fight. At first faulty torpedoes frustrated them. But after solving this problem well into the war, our capable submarine fleet tore into Japanese shipping.

Life aboard a sub was cramped and rigorous, water for bathing limited, ventilation poor. Men slept alongside greased torpedoes and above huge, often overheated storage batteries. But crews were chosen for unflappable personalities as well as proficient skills. In action, teamwork erased grumbles. “Take her down!” “Clear the bridge!” “Dive! Dive!” Orders like these sparked a controlled explosion: sailors slithering through hatches and watertight doors, racing to battle stations. 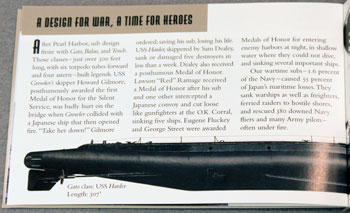 A Design for War, A Time for Heroes

After Pearl Harbor, sub design froze with Gato, Balao, and Tench. Those classes – just over 300 feet long, with six torpedo tubes forward and four astern – built legends. USS Growler’s skipper Howard Gilmore, posthumously awarded the first Medal of Honor for the Silent Service, was badly hurt on the bridge when Growler collided with a Japanese ship that then opened fire. “Take her down!” Gilmore ordered; saving his sub, losing his life. USS Harder, skippered by Same Dealey, sank or damaged five destroyers in less than a week. Dealey also received a posthumous Medal of Honor. Lawson “Red” Ramage received a Medal of Honor after his sub and one other intercepted a Japanese convoy and cut loose like gunfighters at the O.K. Corral, sinking five ships. Eugene Fluckey and George Street were awarded Medals of Honor for entering enemy harbors at night, in shallow water where they could not dive, and sinking several important ships.

Our wartime subs – 1.6 percent of the Navy – caused 55 percent of Japan’s maritime losses. They sank warships as well as freighters, ferried raiders to hostile shores, and rescued 380 downed Navy fliers and many Army pilots – often under fire. 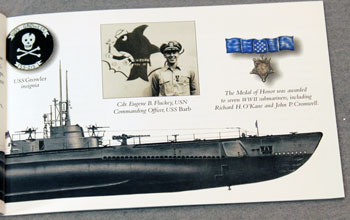 Upper right: The Medal of Honor was awarded to seven WWII submariners, including Richard H. O’Kane and John P. Cromwell

The bottom portion of the page continued the picture of the USS Harder from the previous page.

Stay tuned. We’ll add the next few pages in another post.

Isn’t it fun to learn more about the days past?

You can learn more about the history behind what our coins represent in Days of Our Coins.