Today, the Thomas Edison Commemorative Silver Dollar Coin remembers the experiments with the conductivity and the resistance of electricity through the human body.

An article in the August 29, 1890 Telegraphic Journal and Electrical Review provided details of the experiments including those of Thomas Edison.

An excerpt from What Constitutes A Dangerous Electrical Current by Nelson W. Perry, E.M.:

The question is continually arising as to what is a dangerous current of electricity, and the answers that may be encountered are usually so varied that the enquirer is prone to ask again with the result as unsatisfactory as before, and a conclusion that the electric fluid is as mysterious in its effects upon life as it is to most people in its other manifestations.

A couple of summers ago I was present at the starting of a new electric underground railroad in one of the coal mines in Pennsylvania. The trolley wire — to use an Irish bull — was a light T-rail supported on timbers overhead out of reach of persons standing on the ground.

At one point there was a switch by which the current could be turned on or off, and on this day, as it was desirable to have this readily accessible, a large wooden block was placed on the ground underneath it.

By standing on this, one could readily reach the trolley rail and switch. Had the block been a perfect insulator, a person standing upon it could have touched the trolley rail without the slightest shock, even though there had been 5,000 volts instead of 350, as was the case; but as it was, the conductivity was just sufficient to give one standing upon it, and touching the rail, a right smart shock, and the whole thing being new to the miners, they were amusing themselves by getting up and touching the rail.

One man, thinking to have a little fun at the expense of another, jumped upon the block, and while he touched the rail with one hand, grasped his intended victim, who was standing on the damp ground, with the other. He thought to surprise his friend with a slight shock, such as he himself had been taking in fun before, but the joke was a huger one than he had anticipated, for, by grasping the other man’s hand, he made a good connection with the ground, through his own as well as his friend’s body, and the result was that both men were violently thrown to the ground, and so quickly, that they scarcely knew what had done it; neither man was hurt, but all had a great respect for that trolley rail thereafter.

Not many days from this time, a mule came in contact with this same trolley rail, and was almost instantly killed, and in falling he pulled his mate over in contact with it, and he, too, was killed.

Now here were three different effects from the same current, yet the conditions being different, the results varied widely.

Now, if we were to try to reason by analogy, we should say — this current was strong enough to kill two mules, therefore these two men ought in all fairness to have been killed. But they weren’t.

Again, among the miners it was argued that since one man alone on the block could easily stand the shock, and two men catching hold of hands were both thrown to the ground, if three or more had hold of each other, they certainly would have been killed.

The electrician readily sees the fallacy in the last argument, but he does not see how the mules should have been killed while the men escaped.

He merely knows from numerous instances, of which this was one of the first recorded, that mules and horses are very much more susceptible to electrical influences than is man.

Why, he does not pretend to say any more than he does why a pig will fatten on arsenic or antimony which are fatal in small doses to man.

The physician can tell, perhaps, but not the electrician, and the physician had to learn the fact from experience; there was not a priori reason why it should be so.

Now, while I know of no a priori reasons why a certain quantity of electricity should be fatal to man, still I believe it to be an established fact that the quantity that will be immediately fatal can be fixed with as much certainty as can the fatal dose of any of our well- known poisons.

So may a man take one or several amperes of current through the hand or leg or foot, or other non- vital portion of the body, and be not permanently disabled, but I do not believe that it is possible for him to take one ampere in such a way that the brain or the heart are in the direct line of the current without instantaneous and painless dissolution.

It has for a long time been generally admitted that one ampere of current, if properly applied, was considerably in excess of that required to produce instant death in man — there has practically been no question as to that, but the question has been how great a voltage was necessary to ensure the passage of an ampere of current through the body.

It has been supposed, and there has been much testimony adduced in support of the supposed fact that the resistance of the human body, and therefore the electromotive force necessary to drive a given quantity of electricity through it, was such a varying and variable quantity that measurements made of the resistance of certain individuals at one time were of absolutely no value in the case of other people, or even in case of the same people at a different time.

As late as last summer, there was nothing but the most contradictory evidence on this all important point, if we are to take the evidence of electrical and medical experts who appeared before referee Becker in the Kemmler appeal.

One expert found, upon testing the resistance of a certain electrician, these results:

The current was passed from one hand, through the body, to the other hand, perfect electrical connection being provided for by moistening the hands with a solution of sulphate of zinc.

These experiments seemed to indicate that as the electromotive force increased, the resistance of the body decreased.

Next a newspaper man was tried. Connection was again made by means of a solution of sulphate of zinc, but in this case the current was passed from the head to the feet.

As was perhaps to be expected from the subject, the average resistance was much greater.

Newspaper men are proverbially early risers, but the electrician is not to be outdone if he knows himself, so the next witness to testify was an electrician who had tested his own resistance from hand to hand with the following results.

Using the current from one cell, his resistance was 80,000 ohms.

Later, using the current from one cell, his resistance was 31,000 ohms.

Two minutes after using the current from one cell, his resistance was 36,000 ohms.

These figures seemed to show two things — first, that, as the electromotive force experimented with increased, the resistance of the body decreased; and, second, that, in a series of experiments following each other in rapid succession, the resistance very rapidly decreased.

The significance of these figures is apparent when we remember that, in order that one ampere of current shall be forced through a resistance, the electromotive force, measured in volts, must exactly equal the resistance, measured in ohms.

Thus, from the preceding testimony, we find a variation in resistance from a maximum of 80,000 ohms, which would require an electromotive force of 80,000 volts, if one ampere is the current required, down to a minimum of 3,500 ohms, through which it would require a pressure of 3,500 volts to force the same current — a variation between maximum and minimum of nearly 2,300 percent, and in the case of the same individual, at different times and different potentials, a variation from 80,000 to 16,000 ohms, or 500 percent.

It is evident, if these figures are reliable, no value whatever is to be attached to measurements made at one time in determining what the resistance would be at another.

It was known that the skin offered the greatest resistance to the passage of the current, and it was readily surmised that in different individuals greater or less callousness might be responsible for very great variations, and in the case of the same individual it was readily to be conceived that the difference in the condition of the skin as regards moisture might have a controlling effect in the measurement of the resistance of the body, and a moistening of the hands with a solution of sulphate of zinc — a good conductor of electricity — was resorted to in the first two cases cited, to remove this difficulty as far as possible, and to insure better contact.

But zinc sulphate is a powerful astringent, and has a tendency to harden the epidermis and prevent its absorption of moisture, or its exudation in the form of perspiration, and, as might have been foreseen, failed to accomplish the object for which it was intended.

Thomas Edison had foreseen the objection to the use of sulphate of zinc, and also another, viz., that it would be totally impotent to remove the insulating effects of the oily exudations of the skin, and in other respects, since the resistance would depend very much on the tightness with which the electrodes were grasped by the person, it would be very difficult to obtain the same conditions with two different persons, or to maintain them the same with the same individual during two successive experiments.

So in his experiments to settle the question in his own mind as to the resistance of the human body he chose a liquid for moistening the skin that was not only not an astringent, but rather the reverse, and which at the same time was detersive and would saponify the grease.

In a solution of caustic potash he found just such a fluid, and he eliminated the uncertainty due to the variability of pressure upon the electrode by causing his subjects to place themselves within the circuit by immersing each hand in a metal jar of this solution which was connected electrically with his battery.

Following this method, by which he sought to maintain his conditions more uniform, he tested the resistance of 250 subjects — probably by far the largest number that has ever been tested under even approximately similar conditions, and found their average resistance to be 1,000 ohms, and out of all this number the extremes were 1,800 and 600 ohms.

Thus we see order again brought out of chaos.

The experiments have since been repeated, though not on the same scale, with results so concordant that it is now considered a pretty well settled fact that the human body does not vary more widely in its behavior toward electricity than it does toward other things- drugs or poisons for instance, and the normal resistance of an adult body is a pretty well-fixed figure, and the maximum variation from the figure as determined for the individual does not exceed 5 percent, under ordinary conditions.

The Thomas Edison Commemorative Silver Dollar Coin shows with an image of an electricity class, circa 1900. 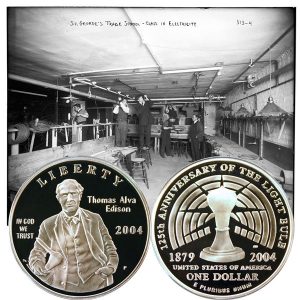