From the Washington, D.C. Evening Star newspaper of November 8, 1950:

First Death Battle of Jets Won By U. S. at 600 Miles an Hour

A United States F-80 Shooting Star jet shot down one Russian MIG-15 in a five-minute battle. Another Communist jet was damaged badly.

Identity of the Communist pilot was not determined.

The battle was waged at 20,000 feet near Sinuiju in Northwest Korea—across the border from Red Manchuria.

Lt. Russell Brown, pilot of the Shooting Star which knocked down the MIG-15, said it exploded.

Maj. Evan G. Stephens, flight leader, said he chased the damaged Russian-made jet, but it escaped across the Manchurian border.

Maj. Stephens said the Communist jets “seemed to want to get us across the border and gave no indication that they really wanted to fight on our side.” American planes are under strict orders to remain on the Korean side.

“We had been strafing gun positions at Sinuiju when the appearance of enemy aircraft was first reported by our air defense controllers,” said Maj. Stephens.

“Two of them were pulling up out of their dive and turning toward the river at exactly our altitude. I called to the rest of my flight to come on up—that we had two of them cornered.

“I turned into the first MIG but he was just out of effective range and was diving for the border, so I pulled the second MIG into my sight and fired. Debris flew off his wing tip and he went into a dive and got away across the border.”

Lt. Brown said the first MIG, which dived out of range of Maj. Stephens, was closer to him.

“I peeled off after him with full power in an almost vertical dive,” Lt. Brown said. “The MIG was diving at the same nearly vertical angle too. Both were doing more than 600 miles per hour.

“The MIG was not pulling away from me but I wasn’t closing the gap. I was at extreme effective firing range.

“After two or three seconds of my machine-gun fire digging into his engine section, I saw the engine area begin to smoke and then the engine exploded. The MIG pilot did not get out and the plane went into the ground.”

Crash Seen by Another.

Maj. Stephens said he saw Lt. Brown’s MIG explode and crash on the east bank of the Yalu.

“I pulled up directly under one MIG-15 and got within about 300 feet,” Lt. Giel reported, “but we were almost on the border and he got across the Yalu River before I had a chance to fire on him.”

Lt. Escola, who did not get a chance to fire a shot, said, “A couple of MIG-15s turned into me twice so I turned into them but each time they dove across the border.”

None of the pilots saw any markings on the enemy planes. 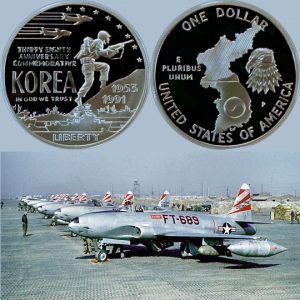