Today, the Congress Commemorative Gold Five-Dollar Coin remembers when the men of the Continental Congress decided, on August 28, 1777, to capture and hold several Friends for their acts against the new United States.

The committee to whom the letter from general Sullivan, with the papers enclosed, was referred, report,

“That the several testimonies which have been published since the commencement of the present contest betwixt Great Britain and America, and the uniform tenor of the conduct, and conversation of a number of persons of considerable wealth, who profess themselves to belong to the society of people commonly called Quakers, render it certain and notorious, that those persons are, with much rancor and bitterness, disaffected to the American cause: that, as these persons will have it in their power, so there is no doubt it will be their inclination, to communicate intelligence to the enemy, and, in various other ways, to injure the councils and arms of America:

“That when the enemy, in the month of December, 1776, were bending their progress towards the city of Philadelphia, a certain seditious publication, addressed ‘To our friends and brethren in religious profession in these and the adjacent provinces,’ signed ‘John Pemberton, in and on behalf of the meeting of sufferings held at Philadelphia for Pennsylvania and New Jersey, the 26th of the 12th month, 1776,’ was published, and, as your committee is credibly informed, circulated amongst many members of the society called Quakers, throughout the different states:

“That, as the seditious paper aforesaid originated in the city of Philadelphia, and as the persons whose names are under mentioned, have uniformly manifested a disposition highly inimical to the cause of America, therefore,

“And, whereas, there is strong reason to apprehend that these persons maintain a correspondence and connection highly prejudicial to the public safety, not only in this state but in the several states of America,

“Resolved, That it be recommended to the executive powers of the respective states, forthwith to apprehend and secure all persons, as well among the people called Quakers as others, who have, in their general conduct and conversation, evidenced a disposition inimical to the cause of America; and that the persons so seized, be confined in such places, and treated in such manner, as shall be consistent with their respective characters and security of their persons:

“That the records and papers of the meetings of sufferings in the respective states be forthwith secured and carefully examined, and that such parts of them as may be of a political nature, be forthwith transmitted to Congress.”

The said report being read, and the several paragraphs considered and debated, and the question put severally thereon, the same was agreed to.

Ordered, That the board of war remove, under guard, to a place of security out of the state of Pennsylvania, the hon. John Penn, esq. and Benjamin Chew, esq. and that they give orders for having them safely secured, and entertained agreeable to their rank and station in life.

Congress took into consideration the remonstrance from Israel Pemberton, James Pemberton, John Pemberton, Thomas Wharton, Henry Drinker, Thomas Fisher, Samuel Pleasants, and Samuel R. Fisher, who were taken into custody upon the recommendation of Congress, praying to be heard;

Resolved, That it be recommended to the supreme executive council of the state of Pennsylvania, to hear what the said remonstrants can allege, to remove the suspicions of their being disaffected or dangerous to the United States, and act therein as the said council judge most conducive to the public safety.

The Congress Commemorative Gold Five-Dollar Coin shows with an image of a Friends meeting house in Philadelphia, circa 1829. 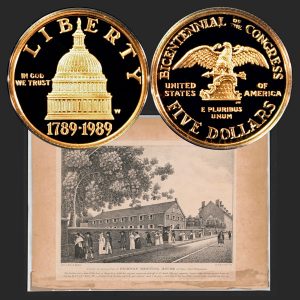