An enemy submarine attacked a tow off the eastern-most point of Cape Cod today, sank three barges, set a fourth and their tug on fire and dropped four shells on the mainland. The action lasted an hour and was unchallenged except from two hydroairplanes from the Chatham Aviation Station which circled over the U-boat causing her to submerge for a few moments only to reappear and resume firing.

The crews of the tow, numbering 41 and including three women and five children, escaped amid shell fire in life boats. Several were injured, but only one seriously. This happened to be John Bolovich, an Austrian, of the crew of the tug. The right arm near the shoulder was torn away by a fragment of shell, the bone being crushed. The minor injuries of the others were from shell splinters.

The barges were in two of the tug Perth Amboy, owned by the Leigh Railroad, and were bound from Gloucester for New York. One was loaded with stone, but the others were light, being on their return trip after bringing coal to New England. The attack was without warning and only poor marksmanship of the German gunners permitted the escape of the crews.

The one-sided fight took place three miles south of the Orleans Life Saving Station, which is located midway between Chatham at the Elbow, and Highland Light, at the extreme tip of the cape. The firing was heard for miles and brought thousands to the beach from which the flashes of the guns and outline of the U-boat were plainly visible. Possible danger to themselves was not thought of until a shell whizzed over their heads and splashed in a pond a mile inland. Three other shells buried themselves in the sand of the beach.

The survivors of the tow, with the exception of two injured, were taken to the Orleans Life Saving Station, communication with which by telephone, under Navy regulations, was not permitted. No information could be obtained from official sources on the cape. Bolovich and another man from one of the barges whose arms had been injured, were removed to the private hospital of Dr. James McHugh. Later Bolovich was taken to a hospital in Boston. The survivors lost all their personal effects and many of them, who were having their turn in their bunks when the U-boat appeared, all but their night clothing.

The tug Perth Amboy with her four barges inline was puffing along leisurely just off the shoals, two miles from shore, at 11 o’clock when the U-boat, of a large type and estimated length of 400 feet, rose suddenly one mile seaward and trained her guns on the tow. A moment later and without warning to the crew a shell struck the second barge amidships. The empty craft doubled up and sank so quickly that her crew barely had time to lower their small boat.

Captain J. H. Tapley of the tug had sounded his whistle as soon as the U-boat was sighted and ordered the barges abandoned. The first shot was followed by a rain of shells that dropped on and all about the Perth Amboy and her barges. A lucky shot next sank the last barge. Meantime hits on the tug had set her afire, but she stood by her barges to the finish. The third barge in the line, the smallest of all, proved a hard mark and the German gunners occupied half an hour in disposing of her.

By this time the firing had alarmed the whole cape and cries for assistance were sent broadcast. No American warships, however, appeared to be in the vicinity and the exhibition of the German gunnery went on methodically. Then two hydroairplanes rose from the station at Chatham and flying low, darted toward the enemy as though to attack. It could not have been seen that they dropped any bombs, but the Germans evidently anticipated an attack from the air, for they stopped firing and elevated their guns against the hydroairplanes. These, however did not fire and the U-boat a moment later submerged.

The planes circled about where the enemy was last seen and then turned their noses toward their station. Scarcely had they reached shore when the U-boat reappeared and resumed her attack on the tug and the one light barge remaining afloat. Both the tug and this barge were in flames and were held where they were by the sunken barges, one of which with its load of stone, made an effective anchor.

When the firing began the crews lost no time in abandoning the tow. Several merchant craft were in the vicinity and, regardless of the danger to themselves, went to the rescue of the crews and towed their small boats to shore. The men of the Perth Amboy, who stood by their ship until it was ablaze from bow to stern, were taken off by life boats from the Coast Guard Station.

The U-boat was still trying to find vulnerable spots in the Perth Amboy and the remaining barge when the hydroairplanes again appeared. At sight of the two planes, the submarine again submerged and did not reappear.

The three women and five children did not suffer physical harm though one of the women, who had been making her first trip at sea, fainted after she had been placed in a small boat. Among the children was an 11-year-oldboy who at the first sign of battle grabbed an American flag and shook it defiantly toward the U-boat. The lad was still clinging to the colors held proudly above his head when he landed on the beach.

The German commander either took a long chance or had an exact chart of the dangerous shoals and shifting sand bars off the cape. It would be impossible for him to submerge to any great depth and the scene of his exploits was not one in which undersea boats might be expected to operate. Tonight he was being hunted by patrol vessels and other war craft.

The Massachusetts State Quarter Coin shows with an image of a German U-boat, circa 1917. 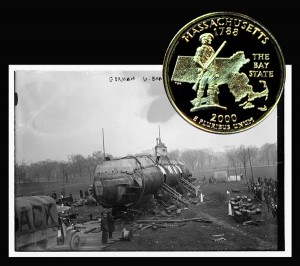