Today, the Martha Washington First Spouse Medal remembers her visit to the Continental Army in Morristown, New Jersey and the bitter cold they suffered in early January 1780.

From the American Monthly Magazine of January 1894 by the Daughters of the Revolution:

Arrival of Martha Washington at Morristown.

The headquarters of the army at Morristown was the Ford Mansion. The Hon. Gabriel Ford lived there with his widowed mother.

“It was the hardest winter I ever knew. Early in January the snow was from four to six feet deep.

“Oh, how the poor soldiers suffered! They were yet in tents, and did not get into huts until in February.

“The roads were almost impassable, and so difficult was it to transport provisions to the army that sometimes the poor fellows would be six or eight days without meat.

“New York harbor froze over so firmly that British troops with cannon passed over the ice bridge from the city to Staten Island, a distance of nine miles.

“Mrs. Washington came in January, when the snow was deepest and the cold most severe and the soldiers suffering most.

“Her presence was like sunshine. She had a kind word and act for everybody.

“The officers accorded homage to her noble character; the soldiers adored her, and yet she was as simple and softly dignified in her deportment as a pious matron ought to be.

“While she could entertain with great cheerfulness, grace, urbanity and good sense, she was seldom without knitting work in her hands when receiving or entertaining guests.

“The suffering of the soldiers touched her generous nature, and she interested the women of every degree in Morristown in cooperating with her in providing for the sick and suffering in the army.”

Two winters previous, in 1777-’78, the troops went into headquarters at Valley Forge.

“While the British were enjoying their comfortable quarters in Philadelphia, the patriots at Valley Forge were crouching in their log huts, where they suffered terribly from cold, disease and the want of food and clothing.”

Yet Martha Washington was there, a veritable angel of mercy. “She suffered every privation in common with the officers, and was busy from morning to night providing comforts for the sick soldiers.”

The A History of Wilkes-Barré, Luzerne County, Pennsylvania by Oscar Jewell Harvey, published in 1909 gave other insights into the weather:

The Winter of 1779-’80 was the severest ever known (up to that time) in the middle States.

The snow began to fall about the 10th of November, 1779, and continued almost every day till the middle of the ensuing March.

In the woods and other sheltered places it lay for many weeks at least four feet upon the level. The weather was intensely cold during the greater part of that period, and harbors, rivers, creeks and brooks were all frozen over.

The bay of New York, and the North River from thence up to Albany, were covered from shore to shore with solid ice. 200 sleds laden with provisions, with two horses to each sled, and escorted by 200 light-horse troops, passed in a body from New York City to Staten Island upon the ice.

By the middle of December the snow was about two feet deep in central and northern New Jersey and eastern Pennsylvania; but the great snow-storm began on January 3, 1780, and the newspapers of the period refer to it as being terrific in its character.

Dr. Thacher, who was with Washington’s army at Morristown, New Jersey, at the time of this January storm, has given a particular account of it in his “Journal”.

He says: “On January 3, 1780, we experienced one of the most tremendous snow-storms ever remembered. No man could endure its violence many minutes without danger of his life. Several marquees were torn asunder and blown down over the officers’ heads in the night.

“The sufferings of the poor soldiers can scarcely be described.

“The snow is now from four to six feet deep, which so obstructs the roads as to prevent our receiving a supply of provisions.”

The storm continued several days, and under the date of January 26, 1780, an officer wrote from the camp of the American army to the New Jersey Gazette:

“We had a fast lately in camp, by general constraint, of the whole army, in which we fasted more sincerely and truly for three days than ever we did from all the resolutions of Congress put together.

“This was occasioned by the severity of the weather and the drifting of the snow, whereby the roads were rendered impassable, and all supplies of provisions were cut off.”

The Martha Washington First Spouse Medal shows with an artist’s image of the lady, circa 1876. 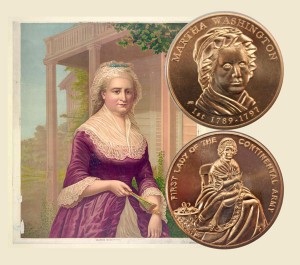